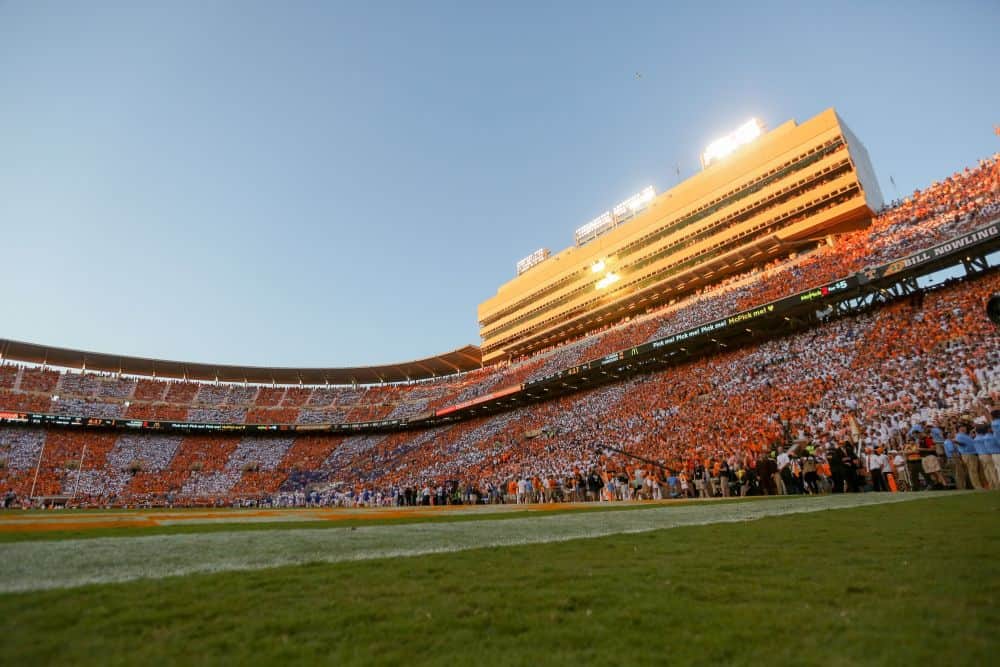 The eyes of the SEC world will be on Neyland Stadium this Saturday. (Randy Sartin-USA TODAY Sports)

Welcome to the Week 7 edition of  SEC Football Predictions. Let us take time and utilize our creative minds to come up with some miracle of a way Florida can play LSU. The possibility seemed likely that these two would play at some point this season, but rescheduling this game has been like a one-armed man trying to solve a Rubik’s Cube for Florida athletic director Jeremy Foley and SEC commissioner Greg Sankey. The perplexity increased tenfold following Tennessee’s loss to Texas A&M on Saturday.

It’s the Third Saturday In October, so let’s get to the Week 7 edition of SEC Football Predictions and observe the week of hate that has defined the Southeastern Conference since 1933.

Quick word of wisdom: Neither team has been very impressive this season, statistically speaking, but BYU defeated Michigan State, 31-14, last week, while Mississippi State looked lost and uninterested in a 38-14 loss to Auburn.

The combination of the game being played in Provo and Mississippi State’s inability to do anything right last week, I give BYU the edge.

Quick word of wisdom: Vanderbilt lost to Kentucky last week. Quarterback Kyle Shurmur wore an eyepatch, but it could not put the Commodores over the top. Unless Georgia requires every player to wear eyepatches on both eyes, the Bulldogs get a win at home against Vandy.
PREDICTION: Georgia 35, Vanderbilt 10

Big game word of wisdom: The Third Saturday In October finally means something again. Tennessee and Alabama are facing off as top-10 teams for the first time since 1999, when No. 5 Tennessee traveled to Tuscaloosa for the first time since 1930 and defeated Alabama, 21-14. Strangely enough, Alabama went on to win the SEC Championship over a mediocre Florida team in Atlanta.

This game has classic written all over it, but Tennessee may be out of classic juice. They have come back from 21 points down three weeks in a row and turned into a pumpkin last week in double overtime in College Station. Alabama’s offensive line appears to have gelled after last week’s dominant 49-30 performance over Arkansas in Fayetteville.

The Crimson Tide’s offense may not need to take the field Saturday if the defense continues to work its magic. Alabama has scored a non-offensive touchdown in eight straight games. Defensive back Minkah Fitzpatrick picked off three passes and took one back over 100 yards for a touchdown last week in the win over Arkansas.

The defense is suffocating. What do the Alabama defensive backs do to celebrate the dominance? They sit, confused over how they could give up 30 points and 400 yards passing in one game. Defensive back Marlon Humphrey and the other defensive backs had a special meeting to work out the “problems” in the secondary. The suffocating defense on the No. 1 team in the nation held a meeting to correct issues in the pass defense. Anyone still wondering why Nick Saban preaches “process” and making sure you are always at your best, no matter what the scoreboard says?

Tennessee’s Jalen Hurd will return at running back Saturday after missing the Texas A&M Saturday for an undisclosed injury. If the Vols can keep from giving the ball to the defense seven times like they did at Texas A&M, Tennessee has a chance to end the nine-game losing streak to Alabama. They came close last year in a 19-14 loss that saw the Vols lead late into the fourth quarter.

Round one goes to the Tide.
PREDICTION: Alabama 34, Tennessee 24

Quick word of wisdom: Missouri is still a year or two away from competing in the East again. Florida is currently competing for the Eastern Division championship with Tennessee and should be at full staff Saturday afternoon when Luke Del Rio returns at quarterback. The Gators need help to surpass Tennessee, and if No. 1 Alabama defeats the Vols about an hour before this game concludes, the Gators could be atop the Eastern Division standings if they can do the expected and beat Missouri.

Every Gators storyline will be secondary to the LSU scheduling debacle until the postponed LSU-Florida game is rescheduled. Until there’s a date for a make-up game, fans will assume the additional help the Gators need to stay ahead of Tennessee is coming from Jeremy Foley and Greg Sankey.
PREDICTION: Florida 31, Missouri 7

Quick word of wisdom: Ole Miss is the highest ranked two-loss team, and might be better than nine or ten of the 11 teams ahead of them in the rankings. Arkansas’ two losses came at the hands of No.6 Texas A&M and No.1 Alabama.

The loser of this game will no longer be considered in the running of “Best Two-Loss Team In The Country.”

Nothing about this series has been status quo. Last season’s win by Arkansas single-handedly gave Alabama first-class tickets to the SEC Championship and National Championship. The 2001 game in Oxford remains tied for the most overtimes (and one of the reasons the offense must go for two after the second overtime) when the Hogs won 58-56 in seven overtimes.

These two teams have been playing as conference foes every season since 1992, but have faced each other annually as rivals since 1981. This has historically been one of the most closely contested series of all time. Since 1981, Arkansas has defeated Ole Miss by an average score of 25-19, with 13 games being decided by seven points or less. This game will be no different.
PREDICTION: Ole Miss 35, Arkansas 31

Quick word of wisdom: Those of us at SEC Football Predictions actually provided a bonus prediction that is coming to fruition. Leonard Fournette has not played any significant minutes since the loss to Auburn. We predicted that Fournette would more than likely begin to shut down the train, and that appears to be the case. The reason given is an ankle injury, but even interim head coach Ed Orgeron admitted to Paul Finebaum that he would not risk Fournette’s health. Most any coach would say that about the team’s core player, but there’s an obvious protection of Fournette’s future going on at this point, and it is something we will see more and more each year from teams with the depth of LSU. Honestly, who can argue the decision? Fournette is a competitor that would probably play until he had no ankle remaining, so it is important that coaches and medical staff look out for the player’s future interest.

Southern Miss opened the season with a win over an SEC team. The Golden Eagles completed the largest comeback in school history in the 44-35 win. Southern Miss trailed 35-10 with :56 remaining in the first half before scoring 34 unanswered points.

This game will not be in Lexington and will not be against a team that resembles Kentucky. LSU is a new team with a new coach. LSU and Auburn have poured a considerable amount of water on what was a substantial dumpster fire since the two teams played in September.  A win this week over a team with a quarterback like senior Nick Mullens will help control the fire to keep LSU hot, rather than burning down the program, which appeared to be inevitable as little as three weeks ago.
PREDICTION: LSU 35, Southern Miss 21