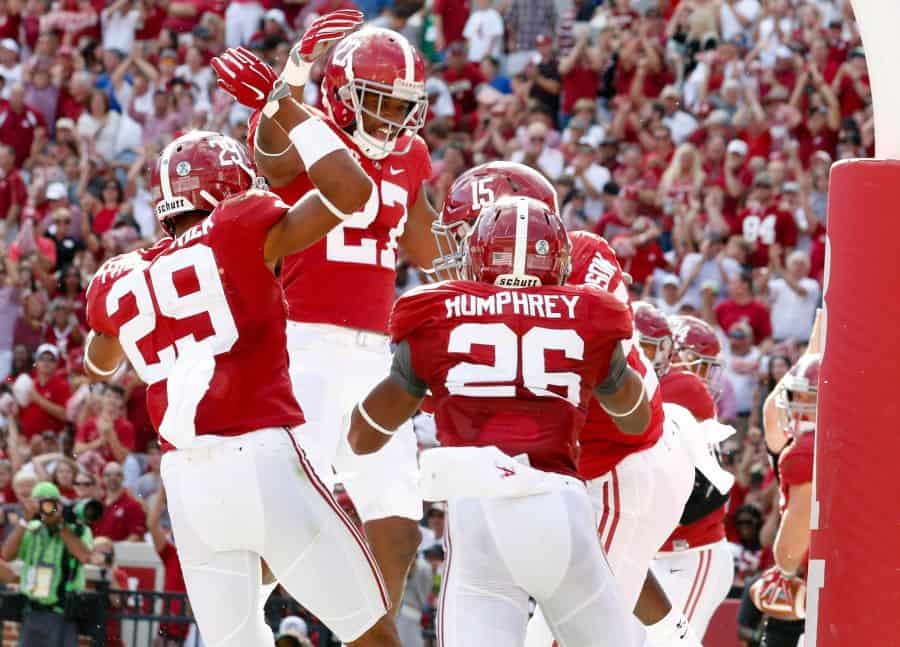 SEC Football Predictions would like to thank Arkansas for teaching us kids and adults of all ages that there’s a reason they play the games that seem like a waste of time. You know the ones. Games like Toledo at Arkansas where people predicting the game wrote one sentence stating there was nothing to say about the game and it will be a 42-7 Arkansas win. Oops.

Following a week at the beach for the predictor, this week’s picks will be popular because they will be abbreviated with less words and more to-the-point scores.

Big game words of wisdom: The media selected Auburn to win the conference at SEC Media Days in July and they may still be correct, but after a 2-0 start, the Tigers have dropped 12 spots to No. 18 in the polls. A win against LSU may send Auburn right out of the Top 25.

Of course, we know Auburn has looked awful in two wins and it appears they are on the cusp of a loss. This week could be the week that any fortune runs out for the Tigers from the Plains.

The team with the quarterback that is most willing to have a stat-line of 140 yards passing and a touchdown with no interceptions will be the winner. Brandon Harris has proven to be the quarterback willing to make plays that are the best option long-term and Jeremy Johnson has not. Johnson may turn the corner at some point, but Death Valley (day or night) will not be that corner.
PREDICTION: LSU 20, Auburn 13

Big game word of wisdom: Tonight will be the night that we will say the players have quit on Spurrier or we will scratch our heads raw trying to figure out Georgia’s major malfunction. It will more than likely be the former and Spurrier will join the class of legendary coaches that feel their past success can’t keep up with future results. This one will get UGA-ly.
PREDICTION: Georgia 45, South Carolina 7

Quick word of wisdom: Sometimes home field is an advantage. I’m not sure that will be the case this week as the Hogs will feel the pressure from the home fans to not replicate last week’s debacle in Little Rock against Toledo. This game could send Arkansas down a nasty path of self-destruction. Time for Hog fans to hit the Woo Pig Panic button.
PREDICTION: Texas Tech 34, Arkansas 24

Quick word of wisdom: That monkey in the Florida hat running around Lexington late Saturday night will be the one that just jumped off the back of the Wildcats.
PREDICTION: Kentucky 31, Florida 21

Big game words of wisdom: Ole Miss is averaging 74.5 points per game. Alabama is giving up 13.5 points per game. Take those stats and toss them out the window. This game will start late and end late and will go down as one of the best of the season.

Ole Miss will jump out to a 14-0 lead early, but Alabama comes back in the second quarter to even things up and it will be 21-21 at the half. The fourth quarter will end in a tie as well as Alabama jumps up 35-21 in the third quarter before the Rebels score late to send the game to overtime.

Alabama wins following Adam Griffith’s first made field goal of the season after a Cyrus Jones interception in the first possession of overtime. This one will drain both teams physically and emotionally.
PREDICTION: Alabama 38, Ole Miss 35 (OT)

Kentucky is hosting Florida, the game is in Lexington.

Don’t count Arkansas out! I see the hogs winning this week against TT, Auburn will play very well against LSU & may even upset them, doubt it but may. I think the Georgia game will be a lot closer then 45-7, gamecocks will not rollover just yet. Bama vs Ole Miss is a toss up, can’t see the Rebels beating Bama at home & for two years straight Bama 29 Ole Miss 24

Thanks Dan. I knew it was in Lexington, but missed it for some reason. The score remains the same though. Ha. The aging monkey will finally jump off the Wildcats’ back.

Good luck to the Wildcats, they are looking good under Stoops & may be this will be a break out year.

Not so fast, Wildcats. Maybe next year.

Another ol’ miss in the prognostications there! ;)

Ole miss going nowhere they will lose to A garbage team but don’t count LSU out they have running back Leonard Fornette.

David…. I’d be mad, but that was pretty awesome. I’m not saying I’m an Alabama fan, but a shirt or two that I bought last week with “B A M A” on the front of them have instantly joined the unlucky pile of shirts. This weekly prediction piece has been rough on Bama during Ole Miss week. 0-2 so far.