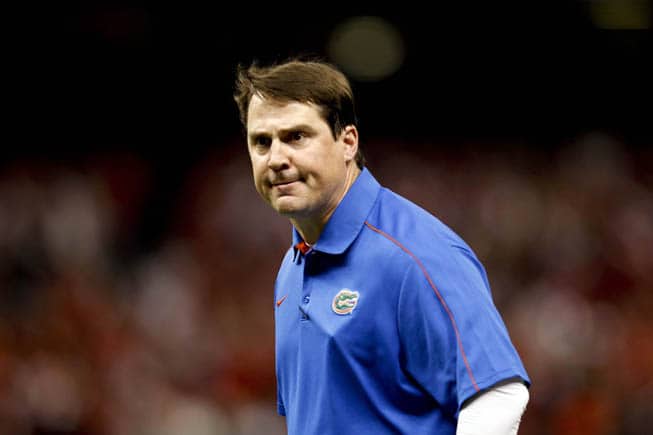 SEC head coaches voted yesterday to keep an 8-game football schedule. The vote was 13-1 with Alabama’s Nick Saban the only coach in favor of 9-games.

The vote didn’t really mean much other than to gauge the interest of the league’s coaches in moving to nine games. On Tuesday, SEC commissioner Mike Slive announced that the conference would play an eight-game schedule in 2014 and likely 2015.

But most college football pundits believe the SEC will eventually move to a nine-game football schedule out of necessity, either to strengthen their schedules for the College Football Playoff or to provide better content for the upcoming SEC Network.

Florida head coach Will Muschamp is in the camp that believes a nine-game schedule is inevitable.

“Personally, I think we’ll end up moving to nine (conference) games eventually,” Florida coach Will Muschamp said. “My personal opinion (is) you create an SEC Network, at the end of the day, it’s going to be driven by the dollar, and having those games is going to be important, and having enough quality games on television promoting a nine-game SEC regular season, in my opinion, will eventually happen.”

The move to nine games would most likely take place in 2016, which gives the SEC time to decipher the strength of schedule the playoff committee might require. It also allows member schools to play out their currently contracted non-conference games without having to cancel them and pay steep fees.

The 2014 SEC schedule was set for a possible release this week, but Mike Slive said that is now “doubtful.”

It pains me to have to agree with Slick Nick; but in this instance he is absolutely right.

the SEC teams are to scared to play themselves so the can go beat-up on small schoolz,,,!

Easy answer for the SEC in 2016 when they go to a 9 game conference schedule. You play 3 home and 3 away in your division. 1 rivalry crossover, 1 random crossover and then 1 pairing of the standings from the east vs. West. I.e. georgia would play at Alabama in a rematch of the SEC Championship game. Sound cool? Then with non-conference no more FCS schools like the BIG 10 agreed to. A lot more respectable. Take it a step further and leave 2 non-conference games open with 1 of them being a bowl rematch from the previous season I.e. Michigan at South Carolina would be must see tv. The other game would be against a lesser foe from the Sun Belt. So you would have 9 conference games, 1 marquee non conference matchup i.e. – florida/florida state, 1 bowl rematch (non bowl teams would play nonbowl teams) and finally 1 cupcake game vs. a non-fcs school from the mid majors. Take the challenge and give the fans what they want.

A 9 game conference schedule hurts teams like UGA, Florida and South Carolina who already play 1 non conference rival. If the SEC moves to a 9 game system kiss the SEC as the best conference goodbye. For starters it will only allow 3 non conference games and the SEC likes to all ready play 2 cup cake money games per season as it is now like most other conferences. So you will see less games like Alabama and Michigan and Auburn and Clemson and more like Alabama 3rd stringers vs some high school team.

Because like the ACC, Big 10, Big 12 and Pac 12 the SEC only has about 5 or 6 teams max that are actually good in any given season. The other so called good teams are only good because they don’t play anybody worth a writing home about. Just this past season the only teams that were worth watching really were Alabama, LSU, Texas A&M in the west and Florida, UGA and South Carolina in the east.

But one reason why Saban wants 9 conference games is to make his job easier as AD once he takes over that spot in a few years and promotes Kirby Smart to head coach. That means he can play teams like South Alabama, UAB and Troy every season. Now SEC man up and start playing more teams from the other big conferences and not beat up on teams like Kentucky, Vandy, Mizzou, Ole Miss and Miss St every season. Because other then Vandy and Miss St, who didnt have that great of a season once they actually played someone, those teams are normally celler dwellers in the SEC.