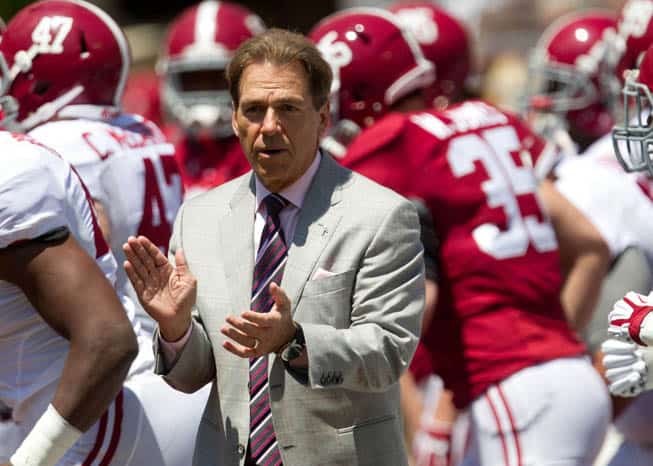 According to reports by ESPN and CBS Sports, the SEC and ACC are both set to make decisions on expanding their conference schedules from eight games to nine. The outcome—slated to occur within weeks—will have a tremendous impact on the 28 programs which call the two power conferences home.

Adding a league game wouldn’t only mean an additional contest against a quality opponent, it would reduce the number of non-league games from four to three. It’s no surprise that coaches and athletic directors are divided on the issue. Here’s a look at both sides of the argument.

In many cases a full-fledged conference game will outdraw a run-of-the-mill, non-conference contest.

To illustrate, consider Ohio State’s 2014 non-conference schedule: at Navy, Virginia Tech, Kent State and Cincinnati. Let’s say that either the Kent State or Navy game is replaced with Northwestern, a team which is not on the Buckeye’s 2014 Big Ten slate.

Alabama’s Nick Saban has gone as far as advocating not only nine league games in the SEC, but is a proponent of requiring one of the three remaining non-conference games be against a power-five team. Here’s what he had to say, according to Michael Casagrande at AL.com:

“My thing is I’m for playing nine conference games and still playing another team in the major conferences, so you play 10 games because of fan interest, people coming to games looking forward to seeing more good games.”

With only four playoff spots to split between five power conferences, the issue of strength of schedule will soon loom larger than ever.

The body of work each prospective playoff team produces in a season may become the No. 1 deciding factor in choosing between the champion of the ACC, the Big Ten, the Big 12, the Pac-12 and the SEC. The concept of scoring “style points” will be alive and well in the new format.

With the SEC getting an automatic pass and the Pac-12 and Big 12 close behind it, this leaves the ACC and Big Ten hoping they can convince the selection committee that their resume is playoff worthy. One way for leagues to beef up their strength of schedule is via solid non-conference opponents, the other is replacing one of these games all together with an in-league team.

Here’s what Miami (Fla.) coach Al Golden had to say about expansion (via Matt Murschel of the Orlando Sentinel):

“I’ve been in favor of going to nine. I think it would help balance our schedules. I like the way the league has grown and the new membership is clearly going to make us better. There are very attractive markets that are going to help our league out.”

One huge cost associated with the recent wave of conference realignment is the loss of some of college football’s best rivalries. One way to protect those that remain, at least in the SEC and ACC, is to expand to nine conference games.

Georgia president Jere Morehead, who will have a vote on the nine-game option, told Seth Emerson of The Macon Telegraph that he “absolutely supports continuing the Auburn series.”

Though the cross-division designations could survive in an eight-game format, they are more likely to live on if the nine-game scheme is approved.

Non-conference games are the only part of the schedule that individual programs have control over. These are the dates that athletic administrators can choose to schedule with major teams from other power conferences, teams from one of the “other” five leagues in the FBS ranks (American Athletic, C-USA, MAC, Mountain West or Sun Belt) or a team from the FCS level.

Dropping one conference game represents a 25 percent reduction in the number of games a program can schedule on its own.

This limitation hurts schools like Syracuse, which could use a solid non-conference slate to bolster its national football image. In 2014, the Orange are one of only four ACC schools that have more than one non-league game scheduled against a power five conference member. Instituting a nine-game format would limit Syracuse’s ability to use its schedule as a building block moving forward.

Replacing a non-conference game with a contest against an in-league opponent increases the likelihood of a loss.

For example, take a look at Duke’s 2014 non-ACC schedule: FCS Elon, at Troy, Kansas and Tulane. If the Blue Devils were forced to drop any of one these four games and replace it with an ACC team, they would be less likely to win.

Here’s what Duke coach David Cutcliffe had to say about expanding to nine-games, according to Heather Dinich at ESPN.

One of the reasons given to justify power programs playing lower-level teams is that the smaller school will experience a financial windfall. If this truly is a benefit to the non-power conference or FCS team, one quarter of these games—at least the ones with the SEC and ACC—stand to be lost forever if league games are expanded.

In 2014, only seven teams in a power conference (ACC, Big 12, Big Ten, Pac-12 or SEC) will play all 12 of their games against FBS opponents. The other 57—or 89 percent—will all play at least one opponent from the FCS level.

Of the seven not playing an FCS team, six are from the Big 12 or Pac-12, the only two leagues which currently play a nine-game conference slate. It’s no coincidence that programs which must play nine league games are less likely to schedule an FCS opponent.

9 conference games or don’t expect me to take your league seriously.

well yeah Snoopy, when there is 14 teams.

if there was 12 teams, 8 wouldn’t be a big deal… but with 14 teams, most of the conference avoids playing each other.

like I’ve said on here before. with 14 teams, an 8 game schedule, and a 6-1-1 format, you play the same exact SEVEN teams every year. you play the other SIX teams in your conference twice every twelve years. taking 12 years for UGA and BAMA to visit each other’s stadiums is ridiculous.

I would suggest a better example would be using a SEC or ACC team which currently play 8 games. Alabama in 2013 had the following home games:
Colorado State, Ol Miss, Georgia State, Arkansas, Tennessee,LSU, and Chattanooga. Only one great game and a bunch of mediocre teams. Replacing Georgia State with a South Carolina or Georgia would be much more entertaining for the school’s fans and the public.

ACC/SEC schools with a built in OOC rival such as FSU/UF could be given a pass in scheduling
2 remaining weak out of conference games vs div1aa or sunbelt. Would be more of a level playing field if all the power 5 conferences go to 9 conference games.

Instead of adding a league game, I’d rather subtract a low-level game by punishing teams who play more than 2 non-power conference teams (start by simply stating than any team which plays more than 1 FCS or more than 2 outside the P5 cannot be selected for either the playoffs or a New Years bowl – except for teams from the G5). That would do more to beef up schedules than a 9th game, IMO.

And of course the major TV networks (and advertisers) will like it as well.

I suspect FCS programs will continue to get their one annual big money game against power conference programs.

However, the “Group of Five” conferences (AAC, MWC, CUSA, MAC and SunBelt) will have fewer games against power conference programs. And the two Independents, BYU and Army, will dislike it most of all.

I suspect eventually all five power conferences will go to the the 9-game conference schedule, and this will only increase the pressure on the “Group of Five” conferences to do the same.

And Baylor’s schedule is always weak. With zero power conference programs on their future non-conference schedule (besides Duke) Baylor is doing themselves self-harm. The Bears need a little more self-respect.

I hope the bowl committees for both the “access bowls” and mid-tier bowls place significant consideration on the above programs weak non-conference schedules when dishing out future bowl invites.