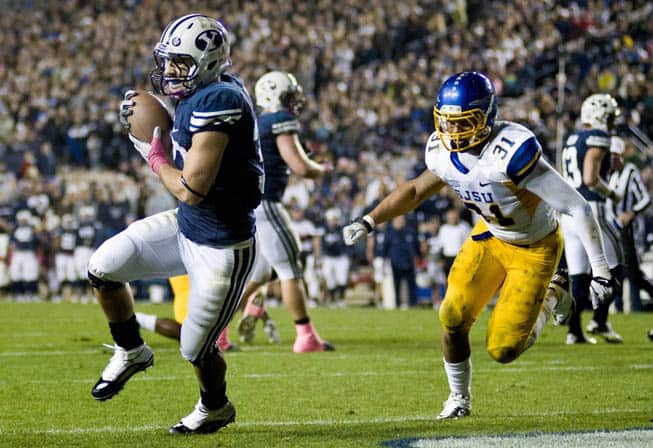 The San Jose State Spartans and the BYU Cougars have scheduled a home-and-home football series for 2015 and 2017, SJSU announced today.

San Jose State also confirmed the 2015/20 series with Oregon State that the Beavers announced earlier today, plus an additional game at Auburn on Oct. 3, 2015. The Spartans also visit Auburn on Sept. 6, 2014, which was revealed this morning when the 2014 SEC Football Schedule was released.

San Jose State will host the first game of the BYU series at Spartan Stadium on Nov. 7, 2015. In the second and final game of the series, the Spartans will travel to face the Cougars at LaVell Edwards Stadium in Provo on Oct. 28, 2017.

The addition of BYU gives San Jose State three games on their 2015 non-conference schedule. The Spartans also travel to Oregon State on Sept. 19 and Auburn on Oct. 3.

In 2017, the Cougars are now slated to host Boise State, San Jose State, and Wisconsin and travel to Fresno State and East Carolina.

San Jose State’s not the only one who announced it today.
http://byucougars.com/m-football/byu-san-jose-state-agree-home-and-home-football-series

Ok. SJSU announced it first and BYU had not announced by the time the article was posted.

BYU has an entire book of announcements that I don’t believe!

That makes half of the MWC that has found their way on to BYU’s schedule. How long do you think the front range schools hold out?

Hold out? Now why would some of BYU’s oldest traditional rivals have no interest in scheduling them?

They pretty much do what Notre Dame does with the ACC now. This type of scheduling hurts no one. BYU does not include themselves in the MWC bowl games as notre dame used to do with the big east. Byu gets games and the MWC gets a decent OOC game.

Is it just me or does every team that plays Alabama plays auburn a few years later?

Auburn,huh? Glad to get two more cracks at an SEC team…..just too damn that Georgia keeps ducking the Spartans! And those series with BYU and Oregon State will be good as well…

if BYU is scheduling 4 MWC teams and 2 CUSA teams per year, the whole notion of independence was for nothing. The MWC could have given the ACC a run if SMU/Houston/BYU filled out the conference