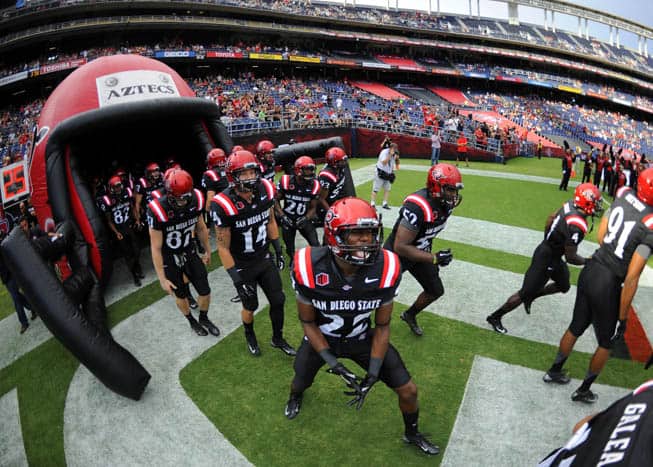 San Diego State will open the 2014 season on Aug. 30 against Northern Arizona at Qualcomm Stadium. The two schools haven’t met since the Aztecs took a pair of games way back in 1965 and 1966.

Also traveling to Qualcomm Stadium are the Idaho Vandals. Idaho, which joins the Sun Belt Conference next season, will visit on Nov. 8. The two schools have met four times and the series is tied at two games each.

San Diego State’s other two non-conference games in 2014 are road trips to BCS programs. The Aztecs will visit the North Carolina Tar Heels of the ACC on Sept. 6 and the Oregon State Beavers of the Pac-12 on Sept. 20.

The first and only time San Diego State and North Carolina met was in the 1998 Las Vegas Bowl. UNC won that contest 20-13.

Although the Mountain West Conference schedule has yet to be released, SDSU knows who they will face and where. Visiting Qualcomm are Air Force, Hawaii, San Jose State, and UNLV. The Aztecs will travel to face Boise State, Fresno State, Nevada, and New Mexico.

San Diego State is 3-3 this season. The Aztecs lost their first three games before rallying to win the last three. SDSU hosts Fresno State this weekend at 10:30pm ET on ESPN2.

Thanks. Unfortunately, the series data websites never have the current season available.

Thanks. Little harder to navigate than CFB Warehouse or Stassen.

You guys always do an excellent job of correcting inaccuracies and acknowledging mistakes. Very impressive. Thanks for all your work on this website.

The Aztecs faced the beavers in OOC play this season too and lost a heart breaker. Unfortunately, this series is 3-1 in favor of the beavers. Go Aztecs!