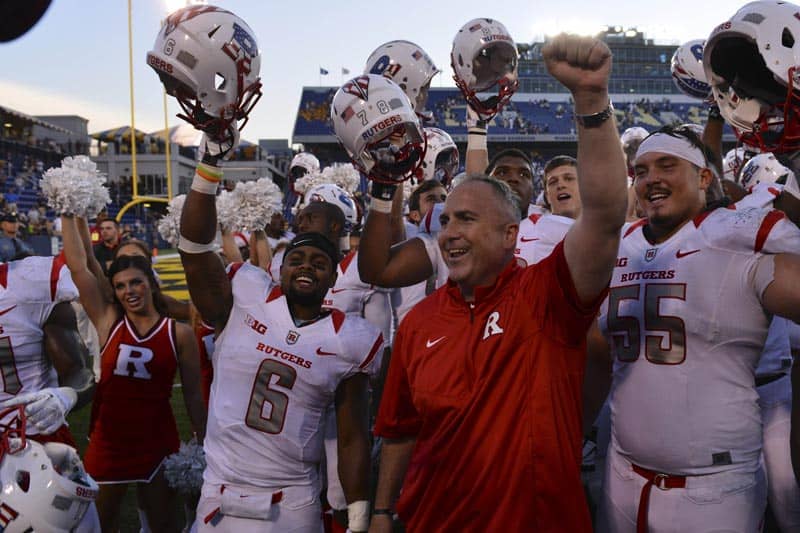 The Rutgers Scarlet Knights finalized their 2016 football schedule on Wednesday with the addition of a non-conference game against New Mexico and an adjustment to their Big Ten slate.

Rutgers will host New Mexico at High Point Solutions Stadium in Piscataway, NJ on Sept. 17, 2016. The two schools have never met on the gridiron.

Rutgers also announced that the Big Ten has agreed to move their home game against Iowa from Saturday, Oct. 29 to Saturday, Sept. 24. That moves their open date to Oct. 29, which falls between a trip to Minnesota and a home tilt with Indiana.

The Scarlet Knights open the 2016 season at Washington on Sept. 3 before facing Howard in their home-opener on Sept. 10. The 2016 season will be the first in which the Big Ten plays nine conference games.

How come no quality non league games? Howard and New Mexico-how weak can you schedule? Washington-they’ve been a non factor since Don James quit 21 years ago. Add in Indiana and Minnesota and there are 4 cream puffs on the schedule. What about a decent Big12, SEC or ACC team to generate some fan interest?

Flying across the country to play UW is a good challenge. Your comment that the huskies have not been a factor since Don James is not accurate , they finish 2000 as the number 3 team in the nation and were the only team to beat Miami that year. Rutgers put together a good schedule ; a power five game on the road, a mid major, and a fcs plus nine conference games.
It’s time all the conferences went to a nine game schedule.

Washington and Rutgers are pretty comparable; mid-level Power 5 teams that contend for bowls. Teams like Rutgers should not be scheduling for the college football playoff. They should schedule to entertain their fans and get enough wins to go bowling. This schedule does just that with very winnable non-conference games and a road trip against a P5 school.

Bill, you’re almost on target, but maybe a little off as well. I look at the schedule Rutgers has put forth and see a good schedule. They have nine conference games, they play a Power-5 conference team on the road, and have two home games with only one being a FCS. It’s a good model of how maybe the SEC should look at scheduling.opposed to their weak non-conference agenda and how they fix & move their conference schedule around with match-ups and open dates prior to any “big” opponent game. To say a “Miinesota” or “Indiana” are cream puffs in 2016 shows a sign of nonsense on your part, you could have thrown in a “Michigan” and “Illinois” for that matter.

Rutgers was scheduled to open the season at the Rose Bowl with UCLA. The game was moved to 2020 at the request of UCLA so that they could play a bationally televised game. Washington is a good subsitute and will be a real challenge.

One championship season in the last 22 years does not make Washington anything more than a mid level P5 team. Indiana is a cream puff and has done nothing since a 1967 Rose Bowl visit. Illinois is consistently weak, Minnesota is 52 years removed from a Rose Bowl visit. Purdue is a regular loser to everybody including MAC opponents. Michigan is starting to build a resume of ineptitude.

I guess Washington is as good as you can do since Rutgers couldn’t even beat Fresno St. during their recent series. Rutgers is the only P5 non league opponent Washington is scheduled to play until 2020-just look @ their schedule of Portland St, North Dakota, Sacramento St, Nevada, Utah St, and multiple games with Montana and Idaho. Too bad for Husky fans that Rutgers is as good as it gets until a 2020 visit by Michigan.

It looks like a case of the bland vs. the bland hoping to win 7 games and go to a minor bowl (now that we 40 of them) against another mid level team in a Christmas week game played in front of a half empty stadium.

Rutgers fans are not interested in Penn State, Michigan, Michigan State, Ohio State? They don’t want to travel to Seattle and watch a Washington team that has been a greater factor than Rutgers in the recent past? I would think a nine game B1G and Washington schedule is far better than anything Rutgers had in the Big East/American.

Exactly right. This B1G schedule is far and above any BE or American schedule could ever be. Plus, the four “flying” road trips to Seattle, Columbus, Lansing, and Minneapolis are each very reasonable flights for fans as to cost and accessibility. One could argue driving over I-78 to 76 to 70 to Columbus is a decent driving road trip… and the game at College Park, Maryland is an easy trip. Everything else is a home game. In the American, they’d be flying to places like Greenville, NC; Hattiesburg, MS, Tulsa, OK, etc.

A good RU schedule will include any teams that produce 9-10 wins. We shouldn’t expect more and should be happy with those results. This year’s results were alot better than expected.

Numerous power conference programs dream of achieving the balanced non-conference schedules which Rutgers has put together including home-and-homes with UCLA, Miami FL and Washington.

Other than Ron Howard U., there is nothing wrong with this schedule. RU only controls 3 games AND the game with UW is a major challenge that RU should be complimented on. Plus, UW is a wonderful locale for RU fans, but they were just in Seattle this season.

This is not accurate, how to we play the same BiG teams at home 2 seasons in a row? same with road games?

RUTGERS plays for championships. Do you understand me?

NINE league games, and after the brutal 2014 and 2015 schedules, this schedule is more than fine. Washington is a replacement for UCLA, more than adequate.