Report: Three Bowl Games to be added in 2014 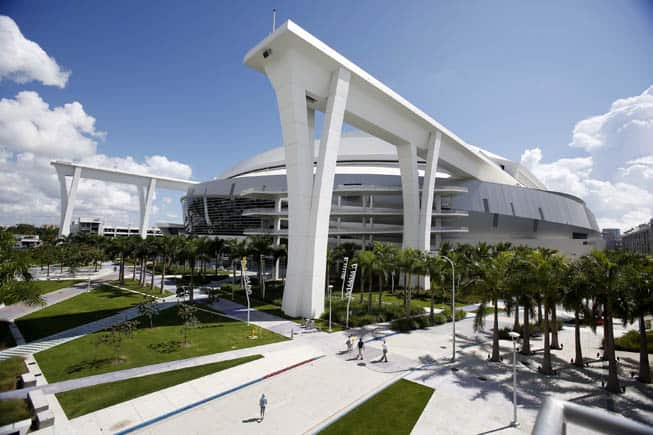 Three additional college football bowl games will be added in 2014, ESPN has reported. Including the College Football Playoff, there will be a total of 38 bowl games after the 2014 regular season.

Back in August, ESPN Regional Television announced the creation of the Camellia Bowl, which will feature a match-up of teams from the MAC and Sun Belt Conference.

The three new bowls will also feature games between members of the five non-power conferences (The American, C-USA, MAC, MWC, and Sun Belt). The conferences provide teams to the three bowls on a rotating basis rather than having set tie-ins.

“The old days for one conference to have a deal are dead. It will be very fluid.”

Here are the details on each new bowl game. More info will come after the games are officially announced (Note: all games use working titles pending sponsorship).

The Bahamas Bowl, which will be officially announced on Oct. 14, will be played at Thomas Robinson Stadium in Nassau. The stadium seats 15,000, but can be expanded to hold up to 30,000.

Teams from The American, C-USA, MAC, MWC, and Sun Belt will appear in the bowl

The Boca Raton Bowl will be played at FAU Stadium, the home of the FAU Owls of Conference USA.

Teams from C-USA, MAC and The American will appear in the bowl.

According to ESPN, this bowl is expected to be played at Marlins Park, which is the new home of the Miami Marlins.

A team from The American will be the “anchor,” with the opponent rotating between C-USA, MAC, MWC, and Sun Belt.

Update: The Miami Beach Bowl was officially announced on Oct. 24. A team from the American Athletic Conference will participate each season against a team from C-USA, MAC, or Sun Belt. Teams from other conferences could also play in the game.

what a joke the bowl system is

Yes, there is such a thing as “too much football.” And yes, I’m aware that “I don’t have to watch if I don’t want to.”

sorry Pete you can not get too much football. I will watch Georgia Southern play Wyoming in the Bahamas Bowl….you will too

With App and Ga Southern coming aboard next year, FBS will have 128 teams, meaning 78 teams will be needed to fill these bowls. Major college football, like all other sports, are becoming a liberal minded phenomenon where “everybody who participates gets a trophy”. Pathetic.

Appalachian State, Georgia Southern and Old Dominion won’t be eligible for bowls until after the 2015 season.

With 39 bowls including the playoff, only 76 teams will be needed because two teams will play twice — the semifinal bowls and the championship game.

Not nearly as pathetic as individuals who try to shove their political leanings into every conversation they can.

Kevin, I don’t believe the Championship Game will be considered a “bowl” it is it’s own separate entity. I believe 39 bowls means 78 teams and whatever two teams will their “bowl semifinal” will advance to the championship which isn’t a bowl.

I meant to say **win** their playoff bowl game will advance..

This is what results when the NCAA lets a 6-7 Georgia Tech team go to a bowl over a 9-3 Louisiana Tech team. Anyone who thinks that is fair is delusional.

don’t forget 8-4 Middle Tennessee, they were one of the 7 who beat Georgia Tech…..

Actually, Louisiana Tech declined their bowl invite because they were hoping for a better one. They didn’t get it and were left out in the cold.

I’m surprised NCAA made the Bahamas Bowl in 2014

this is such a joke!! who cares about the non-power conferences bowl games! roll tide!

I’m going to guess you never even went to Bama.

Alabama fans have already forgotten the years before Saben. Can’t wait for those days to return.

College football was better before the BCS. Before the big 5 clown conferences decided to that there wasn’t enough money or power for all teams.

People in the schools going to those bowl games care. Some of us don’t give a flying fuque about Alabama. We care about ourselves. See you in the Bahamas.

Around the Bowl, an DOWN THE HOLE…..roll tide roll! WAR DAMN EAGLE!

lets give it to the trophy generation….. everybody gets a ribbon

for everybody complaining, it beats nothing. If you don’t want to watch then you don’t have tio but football is football.

when the SEC, Pac12 Big10 ACC Big Twelve decided to not include the other conferences (for fear that they would lose to those teams ie Boise State), Then this is what happens. I look forward to seeing UCF at the Bahamas or at the Miami Bowl. Those in the other conferences have always been scared to face other teams because they know eventually they will lose to some of these teams.

Then maybe we save spots for the top 2-3 of all the conferences instead of giving out Participation Ribbon Bowl games to the #8, #9, and #10 teams in the SEC and the Pac 12? If you’re going to cut bowl games, fine, but let it be for teams who finish in the top half of their conferences. I think the 8-4 team from the American or the C-USA who finished second in their given conference is legitimately more deserving than the 6-6 team who is in the cellar of the SEC.

My preference is this … out of a 12 game schedule, a team must go 7-5 to get to a bowl and if a team loses to an FCS school during the season then they are bowl ineligible. That will keep the quality of the bowls up there and reduce the number of games between FBS and FCS schools. I do not subscribe to the theory that the FBS schools are there to prop up the FCS schools’ athletic budget. If the FCS schools can’t stand on their own then let them play Div-II ball.

Well, then K-State could go 10-2 but because of their loss to ND State, they wouldnt get in. No t a good theory

Your preference sucks. There are plenty of great FCS schools that don’t move up for a number of reasons (politics, region, consideration of other teams, tie-ins to other state schools, etc.) that are vastly better than a number of FBS teams.

The G-5 conferences need to generate more bowl games AGAINST POWER-5 conference teams! How is plucking your lesser teams and creating meaningless bowls against one another beneficial? The deck is already stacked against you in terms of TV exposure and recruiting because you took it upon yourself to play in a ‘similar-but-unequal’ Division-1A. UCF beat Georgia two years ago in a bowl—Boise over UW last year—-etc., etc.

Glad to see the less visible conferences create their own Bowl opportunities.

Agree. It is disappointing to see the BCS conferences segregating themselves from the five other conferences. Before the crappy BCS, teams just played everyone. Yes, there were ‘traditional’ teams…. but they still played the up and coming teams.

You guys against it are so stupid. It’s just exhibition games at the end of the year. Don’t watch them. If you just want to watch the BCS games, that’s fine. Because no one will give a crap what you watch on TV. People that have no importance on a subject sure do have a lot to say

I actually prefer the small school bowl games. The main reason why is that they are not on tv much and it’s nice to see other schools then schools in the power 5 conferences. About the only time you see these schools is the first weeks when there loosing to a bigger school by allot.

What about FIU? (Florida International University) :-)

I don’t see why so many people have such a problem with these lower-tier bowls. Nobody is forcing you to watch. This is good experience and exposure for schools that have little or no chance of making the Final Four. Hopefully, they don’t prevent that from becoming an Elite Eight in the next few years.

I like to see the one that win the conferences play for the tille game only. its the only way it will
be fair for every one