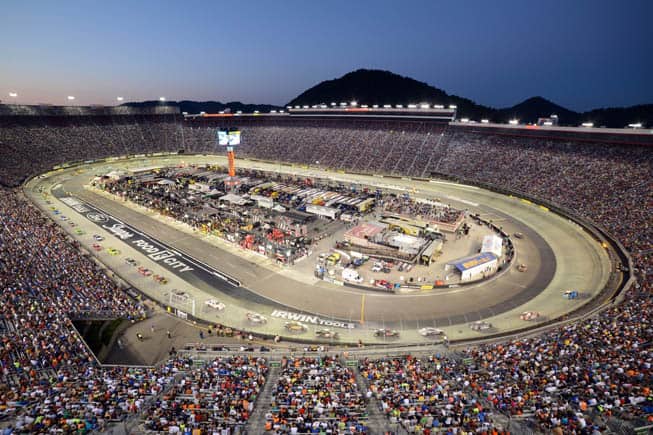 The Tennessee Volunteers will face the Virginia Tech Hokies at Bristol Motor Speedway in 2016, CBSSports.com’s Bruce Feldman revealed today. An official announcement is expected on Monday.

Bristol Motor Speedway is a NASCAR short track located in Bristol, Tennessee. It has a seating capacity of 160,000 and is the 4th largest sports venue in the United States,

A football game at Bristol has been in the works for years. Back in 2005, both teams reportedly had offers of $20 million for the game. Virginia Tech was close to agreeing to the game, but Tennessee had no interest in the game.

Bristol Motor Speedway has hosted a football game just once in their history. In 1961, they staged an NFL preseason game between Philadelphia and Washington.

An opening for the game in 2016 arose when Wisconsin postponed a home-and-home series with Virginia Tech that was planned for 2016 and 2017. The games were moved to 2019 and 2020 to allow Wisconsin to meet LSU at Lambeau Field to open the 2016 season.

Virginia Tech athletics director Jim Weaver acted quickly and lined up a “major conference opponent” for 2016-17, but declined to reveal the school until the contract was finalized.

The Hokies have an opening for a non-conference game in 2017, so it’s highly likely that they will host Tennessee in the second half of a neutral-home series.

Tennessee has two non-conference openings in 2016 and one in 2017. The Volunteers host UConn and travel to Nebraska in 2016 and then host Southern Miss and Nebraska and visit Memphis in 2017.

Awesome. There is nothing else to say.

Yes!!!!
Both College football and NASCAR have a boost!

Yeah, the average college football fan will REALLY be interested in NASCAR after this.

I used all caps to convey sarcasm, FYI. I assume you didn’t understand that since you appear to be a NASCAR fan.

What is the capacity of the Bristol Motor Speedway?

WOW! That’s even more than the Big House in Ann Arbor and Boston’s Fenway Park combined! Thank you, Kevin.

this was thrown around about ten years ago, but Bristol did a make over and built new buildings in the in-field, I wonder if they will take those down. curious to know how/where the field will be.