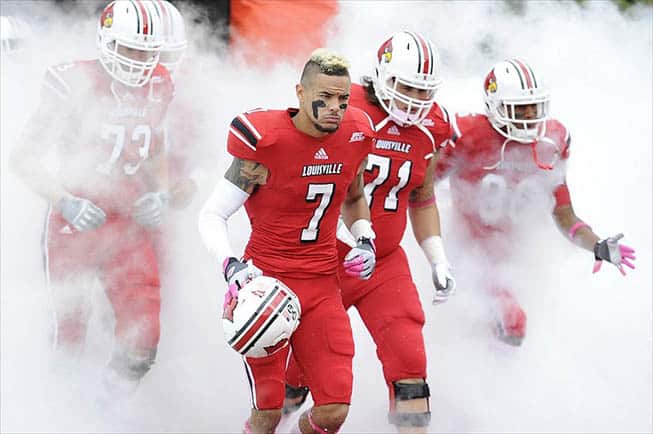 Yesterday, NBC announced that they have extended their television rights deal with the Notre Dame Fighting Irish through 2025.

The new deal gives NBC the rights to a minimum of seven Notre Dame home games per year, and NBC Sports Digital will continue to stream those games online.

Shortly after the deal was announced, NBC President of Programming Jon Miller told Brian Hamilton of the Chicago Tribune that Notre Dame will play Louisville in 2014.

If the Notre Dame-Louisville game holds true, the Fighting Irish will only need one more ACC opponent for their 2014 schedule. Florida State was revealed as an opponent last week, and the Irish already had games against Pittsburgh and Syracuse on their schedule.

Notre Dame is joining the ACC in all sports except football beginning with the 2013-14 season. As part of the deal, the Irish will play five ACC schools in football each year.

No location for the Notre Dame-Louisville game was mentioned and it would be the first ever meeting between the two. It’s possible the game could be played at Louisville because the Cardinals currently have two non-conference games on the road and one at home. Couple that with four ACC home games and Louisville has only five games scheduled at home in 2014.

Regardless of the location, the game adds even more luster to Louisville’s 2014 schedule. The Cardinals are predicted to slide into Maryland’s spot on the ACC schedule, which means they would host Florida State, NC State, Virginia Tech, and Wake Forest and travel to Boston College, Clemson, Syracuse, and Virginia.

In non-conference play, Louisville is scheduled to open at home against Kentucky and later travel to Florida International and Marshall.

Notre Dame’s 2014 schedule, which is already tough itself, continues to get stronger. In addition to Louisville, the Irish are tentatively slated to host Rice, Michigan, Purdue, Stanford, and Northwestern and travel to Florida State, Temple, Navy, and USC.

Per reports, the Irish are likely to cancel their 2014 road game at Arizona State. They also need to cancel or postpone two more games to make room for the upcoming ACC opponents.

when do they play michigan in 2014

Right, Louisville does not play Michigan. I assumed he was asking about Notre Dame.

As mad has Michigan is that game in South Bend Ain’t happening in 2014!!

Opening day 2014, following a National Championship, blowout Kentucky followed by a win over ND sounds like the beginning of a repeat. The “Years of the Cards”. Not to mention the probability of back to back NCAA Basketball Championships.