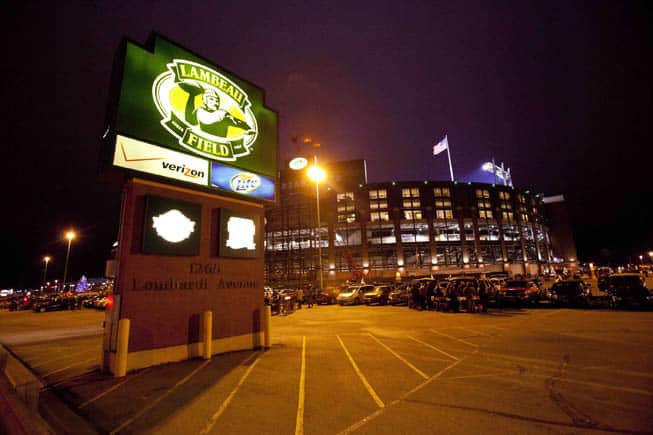 LSU and Wisconsin may play at Lambeau Field in 2016. (Jeff Hanisch-USA TODAY Sports)

A neutral site series between LSU and Wisconsin first came to light back in April when reports indicated that the Badgers wanted to play the Tigers at Lambeau Field.

Just a few days later, it was revealed that LSU and Wisconsin would first meet in Houston in 2014 but were still discussing a date for the game in Green Bay.

LSU athletic director Joe Alleva then stated in late May that a contract for the games was not signed “…but it’s very, very close.”

That statement from Alleva was followed by a couple of months of silence, likely due to media days and the start of Fall practice. But that changed last night when Scott Rabalais of The Advocate talked to Alleva.

Rabalais went on to tweet that the contract would be finalized and signed next week.

The Times-Picayune confirmed the story this morning, saying that the contract should be finalized next week for games in Houston in 2014 and Lambeau Field in 2016.

“We still have some small details to work out but the contracts should be done next week,” LSU associate athletic director Verge Ausberry told the Picayune. “It took awhile but that’s how these neutral site games are. They’re in NFL stadiums and we have to go through the conference office and talk about TV rights.”

The Journal-Sentinel countered this morning with statements from a UW official that no date has been set yet for the Lambeau Field game.

Both schools have been altering their future schedules in preparation for the series. In May, LSU moved a 2014 home game against Georgia Southern to the 2017 season.

And just earlier this week, we learned that LSU and Western Kentucky moved their planned 2016 game to the 2015 season.

That gives LSU an open spot for a non-conference game in 2016. They are scheduled to open that season on Sept. 3 vs. Southern Miss. That game will likely change in order for LSU to open at Lambeau Field.

Wisconsin announced their 2014 football schedule in May. Absent was a previously announced season-opener at Washington State. They later announced that series was moved to 2022-23.

Currently, Wisconsin has two non-conference openings in 2016. The Badgers are slated to visit Virginia Tech on Sept. 10, which could be daunting considering they may play LSU the week prior.

While my Tigers do play their share of creampuffs, I love that they are willing to give up some home game money to play games like this – Oregon in Dallas two years ago, TCU in Dallas this year, now this. Les Miles et. al. are doing a terrific job of putting LSU out there.