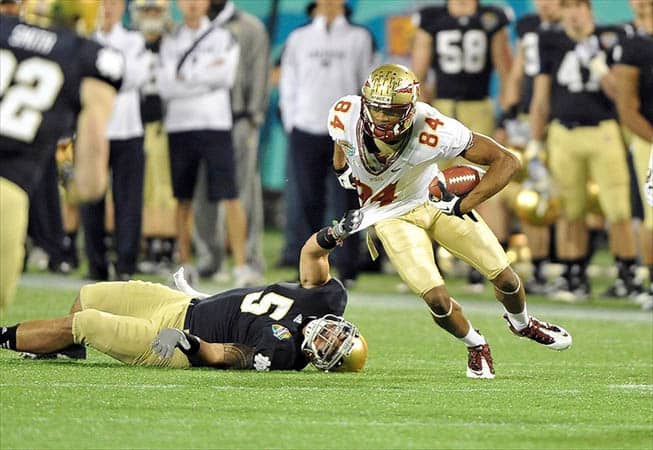 The Florida State Seminoles could host the Notre Dame Fighting Irish in 2014, D.C. Reeves of Warchant.com has reported.

Notre Dame is set to begin playing five ACC schools per season beginning in 2014, and one of those games could see the Fighting Irish travel down to Tallahassee to take on the Seminoles at Doak Campbell Stadium.

Sounds like #FSU-ND in Tallahassee in 2014 is almost a done deal: http://t.co/QPw36SwERw

Florida State and Notre Dame last met in the 2011 Champs Sports Bowl in Orlando, FL. The Seminoles came away with an 18-14 win to extend their overall series lead against the Irish to 5-2.

If Florida State does host Notre Dame, their 2014 schedule will get even tougher. The Seminoles open the season against Oklahoma State at Cowboys Stadium in Arlington and end the season against arch-rival Florida, this time in Tallahassee.

And based on the 2013 schedule, FSU will host Boston College, Clemson, Pittsburgh, and Wake Forest and travel to face Miami, NC State, and Syracuse. The Seminoles could also be looking at a trip to Louisville if the Cardinals take the place of Maryland on the ACC schedule.

If #FSU lands ND at home, the 2014 slate will include OK State in Dallas, Clemson, UF and Notre Dame in Tally, at Louisville, at Miami.

Florida State does have a buy game against The Citadel on the slate. The game against Notre Dame, in addition to Oklahoma State and Florida, would finalize the non-conference portion of their schedule.

The possible trip to Florida State, among others, may lend credence to the ESPN report that Notre Dame has or will be dropping Arizona State from their 2014 schedule. The Irish currently have 11 games on their schedule, but need to drop two in order to make room for three ACC games.

Games against Pittsburgh at home and Syracuse at MetLife Stadium in New Jersey were previously scheduled, so they will likely remain in place.

Notre Dame’s 2014 schedule would be even tougher with a trip to Florida State. In addition to Pitt and Syracuse, the Irish are currently slated to host Rice, Michigan, Purdue, Stanford, and Northwestern and travel to Temple, Arizona State, Navy, and USC.

But as we mentioned, two of those games will have to be canceled or postponed. Arizona State is now rumored to be one, and the other candidate will likely be between Northwestern, Purdue, Rice, and Temple.

I wouldn’t count on that Michigan game happening

Two reasons why the Michigan game will happen:

(2) The contract with Michigan requires a three year notice to end the series – Notre Dame gave that notice last year, meaning if they drop the 2014 game there would be a breach issue. Breaching the contract over one year simply isn’t worth it for Notre Dame.

I’d be surprised to see the Irish drop Purdue. I gotta think that Temple is the most likely at this point.

I Guess no more FSU vs. Savannah St.?

yeah lets see if Savannah State gets a field goal next time!!!

If West Virgina wants to back out of a game again at the last moment then someone else might call Savannah State also?

SSU called FSU not the other way around. Infact SSU players were asked if they would like to play FSU and they said yes.

Notre Dame will drop Arizona State, and the other game likely to drop is Northwestern. Those two teams have been playing well the last couple years. You know ND won’t get rid of Purdue, Navy or Temple! Why drop the “easy” games?

So you mean the Fightless Irish will drop good teams for good teams? Navy is not a pushover like people think. Purdeu or Rice will be looking for another game that season.

Dang it! no way the ACC gives ND road games vs FSU and CLEMSON..

Any word on when Notre Dame and BYU will schedule the four remaining TBA games they have against each other?

Haven’t heard anything on that at all.

Will they call this game the Catholics vs. the Criminoles?

Nope they will call it another loss for ND.