Report: Arkansas State to play at Tennessee in 2014, may play Miami (FL) Home-and-Home 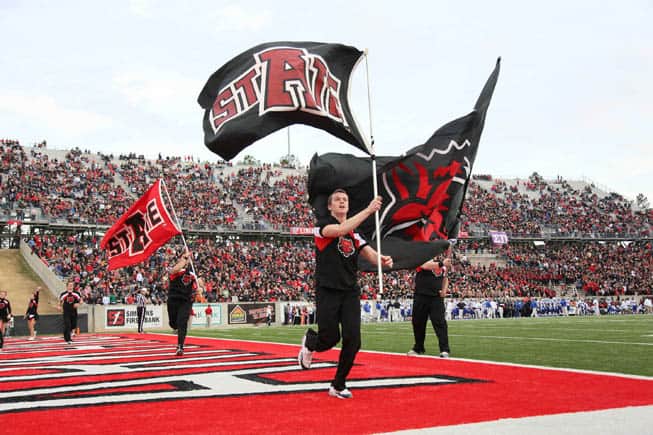 The Arkansas State Red Wolves will reportedly play at Tennessee in 2014 and are close to finalizing a home-and-home agreement with the Miami Hurricanes.

Jeff Reed, editor of the Arkansas State Scout.com site, reported last week that ASU will visit Neyland Stadium in Knoxville in 2014. InsideTennessee.com also reported that Tennessee has added ASU to their 2014 schedule.

Today at the Little Rock Rotary Club meeting, Arkansas State head coach Bryan Harsin told the crowd that the Red Wolves will play at Tennessee and added that they will have a home-and-home with the Miami Hurricanes.

As for when the games would be, Harsin told ArkansasOnline.com “…’14, ’15…both years. Right in there. I don’t know which in particular, exactly the order, but probably those next two years.”

ASU director of athletics Terry Mohajir was also on 103.7 The Buzz today and was questioned by the Buzz’ Christina Lecuyer about a “big announcement” of a “home-and-home stand” and if it had been officially announced yet.

“Well, I don’t know if we have or not, but we do have a good home-and-home. I know that, yes, it’s a fantastic brand, fantastic team. Ah, it’s over there, and you know, the Hurricanes and something like that. I think it’s going to be pretty good for us” Mohajir said.

“Tennessee is going to be on the schedule, and so, we’re working towards all those games right now.”

Mohajir later said to Lecuyer “I think what you were alluding to was the Miami game, right? The home-and-home with Miami is what you wanted. I knew what you were asking, just holding off here a little bit. That’s out there now.”

Although both games were mentioned today by both Harsin and Mohajir, the Arkansas State Sports Information Director released a statement via Twitter that no games have been finalized yet.

A-State very excited about future FB schedule opportunities, although no new opponents have been officially announced or confirmed.