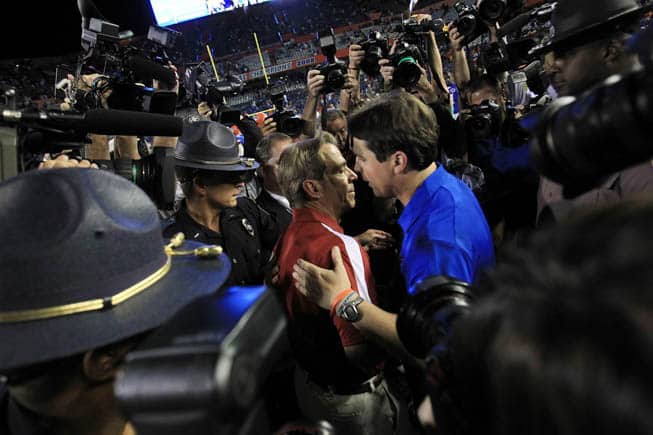 Nick Saban and Will Muschamp could match wits in 2014. (Kim Klement-USA TODAY Sports)

The Alabama Crimson Tide have taken some heat lately due to quirks with the conference football schedule rotation.

Those quirks didn’t place Florida, Georgia, or South Carolina, the three strongest SEC East teams, on Alabama’s schedule in 2012 or 2013. Alabama last faced one of the East’s big three in 2011 when they traveled to Florida after hosting the Gators in 2010.

All three of those series occurred under the previous 5-1-2 format when the SEC was at 12 teams. Each team played the five other teams in their division, one cross-division permanent rival, and two cross-division rotating games.

With Missouri and Texas A&M added to the conference, the SEC now utilizes a 6-1-1 format which eliminated one of the cross-division rotating games. In turn, this lessened the possibilities for more marquee cross-division match-ups.

But according to Cecil Hurt of the Tuscaloosa News, that will change in 2014 for the Crimson Tide as they appear to be getting the Florida Gators.

Destin aftermath: hearing Alabama vs. Florida on the 2014 schedule rotation. Should know for sure in a week or two.

Alabama would likely host Florida in Tuscaloosa in 2014 since they play their rotating cross-division opponent, Kentucky, on the road this season.

Last week, Hurt reported that Alabama had an 80% chance of playing Georgia in 2014. But today when asked about the increasing possibility of Georgia-Texas A&M in 2014, Hurt replied only that the Alabama-Georgia cross-division match-up has been pushed back to 2015.

Update: It appears that Cecil Hurt has deleted the Tweet where he indicated Alabama-Georgia has been pushed back to 2015. Below was the link.

The rumor of a Georgia-Texas A&M match-up heated up last month when UGA athletic director Greg McGarity said that their strength of schedule is “off the charts for the next two years” and that their West opponent in 2014 will be somebody “really good.”

If Alabama-Georgia is pushed back to 2015, that certainly opens the door for Georgia to play at Texas A&M in 2014. The Aggies are “really good” and Georgia likely wouldn’t play LSU since they host the Tigers this year.

Whatever the case may be, it looks like the “bridge schedules” in 2014 and 2015 are going to deliver some tantalizing match-ups in the SEC.

I love it. Its good for recruiting and for SEC. Go Gators

Glad it’ s going to happen! Since Urban Meyer left, I don’t think we Tide Fans hold any animosity against Will Muschamp or the Gators. Be a good game..

It wouldn’t be an even matchup right now; the Gators don’t have the QB position locked down the way Alabama does. I’m not sold that Jeff Driskel is the answer yet. A QB with guts and that UF D would give Bama all it could handle.

The ppl that make the schedule is in bama. And bama picks it ooc schedule.

Ready to welcome the Aggies to the SEC! Go Dawgs!!

Guys, not everybody in Alabama is as grammatically challenged as @nick up there. ^ These will be exciting games though. Roll Tide

This is a classic SEC match-up. A clash of the titans.

I welcome this I love it when bama takes the gators down ….roll tide !!!

With the 6-1-1 format, teams are only going to play the rotating teams once every six years. So quit your bitching. Everyone will get to play everyone else eventually.

If SEC teams had their choice, they would play ZERO conference games, 10 games vs the Sun Belt and two big ten teams to rub it in.

These marquee SEC games are great for the fans. Unfortunately, it also means more SEC teams beating up one another with a lesser chance of getting into the NC game, or even a major bowl. Folks, this is exactly what the PAC-10/12, the ACC, the Big 12 and others want so they can enter their “best” teams into the NC and major bowls. They rarely play more than 3-4 top teams in a year, yet they want everyone to come down hard on the SEC who, by simply playing eight SEC rivals, are playing 6-7 top opponents during the year. Take Bama, who usually starts the year with a Top-10 team from another conference — Clemson, VT, Michigan — plus the SEC chamionship game and you’re looking at 8-9 quality games. Who thinks any other conference plays that many quality opponents?

Calling someone a fag isn’t called for. Someone’s sexuality isn’t a basis to make fun of someone. Keep it to football, folks.And yes, I’m gay…and I’m tired of so many kids in this country killing themselves or being beaten up for being who they are. So, let’s keep it on the field.

a 6-1-1 format with 14 teams sucks. people need to stop complaining. it’s the format that is the problem. Alabama, along with everybody in the West has to play Kentucky or Vanderbilt sometimes. Florida, along with everybody in the East has to play Miss St or Ole Miss sometimes too. just the way it is. blame the scheduling. 6-1-1 format gets you to see an opponent from the other division once every 6 years and a chance to host them once every 12 years. it’s not a good format. to top it all off, you never see those 6 opponents, but you see the same 7 EVERY SINGLE YEAR.

9 game conference schedules needs to happen to spread more matchups across the conference.

The Tide has more cupcakes on their schedule than any othrr SEC team. Go Dawgs. GA State…sgain…really? Bama…thr cupcake eater.

Bama turns teams into ‘cupcakes!” UH, how did Georgia do last year against Bama?

@BabaBrute…it sure wasn’t a cupcake game. Besides aTm…we come the closest to neutralizing your team. It was a great game and you need to give credit where credit is due.

Shucks I didn’t bring up the “cupcakes” comment, you did. But, as mighty Notre Dame found out, Bama can be awesome. Throwing “cupcakes” around tends to draw logical reply. I live in Ringgold, Ga., but I don’t denigrate any team. One man’s “cupcake” can be the next man’s waterloo. I root for Georgia, too unless they are playing the Tide, but I don’t call anyone’s team a cupcake.

Georgia sure looked like a cupcake when they played the gamecocks…

Teams “coming close to neutralizing my Tide team” is just fine and dandy to us true Tide believers. As long as they just “come close” everythang is plumb good! It would not be like us to run up a score. I love good close games!

and the hate lives on …….. gotta love kickin’ dawg butt for the lion share of the past 20+ years! We’re coming for you this year and get the same 20+ year win streak started again.

and the hate lives on …….. gotta love kickin’ dawg butt for most of the past 20+ years! We’re coming for you this year to get the same 20+ year win streak started again.

What goes around, comes around! All things are temporary and he who is on top now will be on bottom later, so bragging is always premature. Crowing too loud about something one has so little to do with (unless you are on the team) is kinda ridiculous. We should not take pride in someone elses accomplishments if we didn’t earn it. Georgia has always had a competitive quality program. They have no cause to be ashamed of the efforts of their team. I’ve been watching Ga. since the days of their legendary coach, Wally Butts, and would be happy to be a dawg if I weren’t a Bama man. SEC forever!

BamaBrute, reference the previous posts/comments by Man of Troy and ricky for insight into what we have been discussing AND mind your own business. You could spend your time more constructively moderating the blogs where Auburn vs Alabama exchange words. Those blogs are where true sportsmanship lives (what a joke).

I read every retort. Just thought some caution might improve the quality of the conversation. I’ve been around a long time and it seems there is less and less football discussion and more BS being spread without a lot of intellect invested. One’s “business” is sometimes to attempt to change the denigration to some gentlemanly introspection; shame there is so little nowadays. So go right ahead and ya’ll spill the verbal diarrhea. Sorry I got in the way of your sportsmanship endeavors.

I appreciate the tenor of your most recent comment/reply. I too am a Bama fan, one that grew up playing football in the state and graduated from HS there before I matriculated and graduated from Florida in 1974. As a boy I remember no love being lost between UGA (coached by Butts) and Bama (coached by the Bear) or GaTech for that matter. At Florida the UGA rivalry took on a whole different attitude. We never won more than 1 game before being beaten multiple times before and after our wins. Spurrier, as the Gator HBC, liked to remind UGA that Dooley and his players used to taunt us about how incredulous they were when they beat us because, after all, we had better players. They would say it must have been that the Georgia players just wanted the win more. So, as you said “What goes around, comes around!”, is an appropriate comment. Unfortunately for UGA, it has come around and hopefully will continue to come around on them!!

Gator, I understand your feelings toward the dawgs. I had similiar feelings toward the Trojans of U.S.C. In the sixties I was living in southern California when the Bear brought the Tide in to play in the Colleseum.against USC. Unfortunately, when my ife bought our tickets she got them on the Trojan side of the field. If you know about SC, you know the college and Colleseum is in the Watts section of LA that is the black ghetto section of the city. My terrified wife and I sat, weakly waving our little Crimson Tide banners in a sea of hostile black USC rooters. faces. During the game the Tide was leading when a USC fan ran onto the sideline and attacked a Bama player in the back with his fists. I got very pee-oohed and wanted to bring immediate justice to the offender. I started down the isle with my wife hanging desperately to my arm. The game was finally over and Bama won by a touchdown. I never felt good about SC or their fans much after that. I lived in Lakeland, Florida,, for years and rooted for the gators. Some of my kin still do so.
Oh, by the way, I never let my wife buy my football tickets after that USC game.