Report: 2014 SEC Football Schedule to be Released on Wednesday 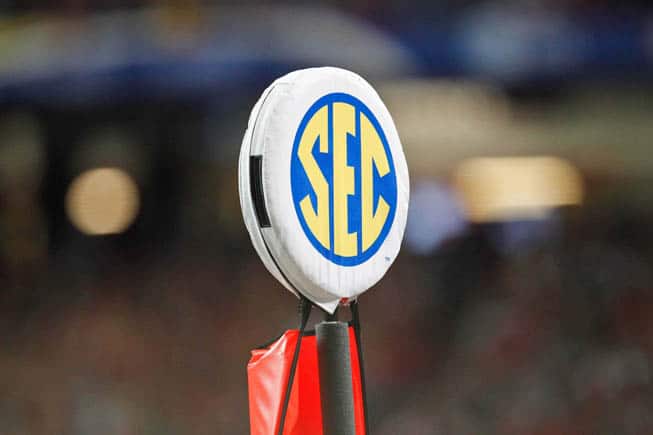 The 2014 SEC Football Schedule will be released on Wednesday, ESPN’s Brett McMurphy tweeted earlier this evening.

The much anticipated schedule was previously expected for release at the SEC Media Days in May, then possibly after the athletic directors meetings last week.

What do we know about the 2014 SEC Football Schedule? First, it will be an 8-game, 6-1-1 format schedule. This was announced by SEC commissioner Mike Slive in May.

Last, we know seven of the eight opponents for each team as well as the locations. Each SEC team should play their six intra-division opponents and their cross-division permanent rival at the opposite location they play in 2013.

That leaves only the cross-division rotating game for each opponent. Not much is known on that except for a few statements that surfaced in June.

Cecil Hurt of the Tuscaloosa News tweeted that Alabama would likely play Florida in 2014. When questioned about Alabama-Georgia in the 2014 regular-season, Hurt stated that match-up was pushed to 2015.

Late in June, LSU athletic director Joe Alleva told The Advocate that the Tigers will not play Georgia or South Carolina in 2014. Of course, things could have changed since then, but it’s likely LSU won’t host Georgia since they play in Athens in 2013. With only one rotating crossover game, the SEC has said they will rotate those opponents rather than have them play home-and-home in back-to-back years.

We could also discover tomorrow some or most of the remaining non-conference games for SEC teams in 2014. The following schools still have non-conference openings: Alabama (1), Arkansas (2), Auburn (3), Kentucky (1), LSU (1), Tennessee (1), Texas A&M (1).

Tennessee’s lone non-conference opening has been rumored to be Arkansas State. Also, Louisiana Tech is supposed to make a future schedule announcement tomorrow, and the timing hints at an SEC foe in 2014.

We’ll have all the updates for you tomorrow as the schedules are announced. In the meantime, you can check the current status of the 2014 SEC Schedules.

national champions should play a top 50 schedule? what a disgrace???

arkansas vs missouri to end the season is a joke….mizzou has no place in this league