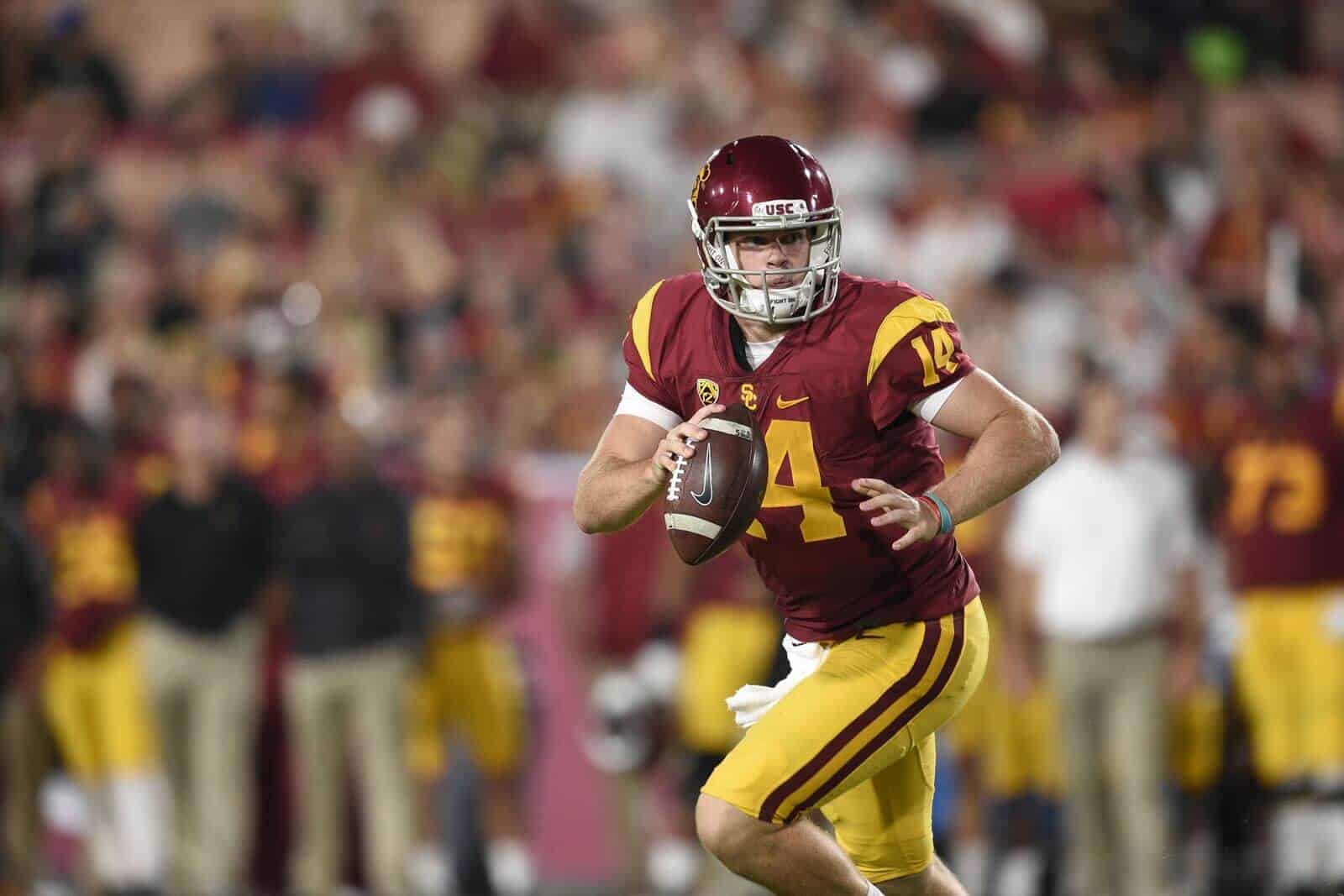 It’s been 30 years since a player from a team with fewer than nine wins won the Heisman Trophy.

That was in 1987, when Notre Dame wide receiver Tim Brown won the biggest individual award in college football despite playing for a squad that finished 8-4 and was ranked No. 17 in the final AP Poll.

It means that 83% of the last 30 Heisman winners played for a team that scored 10-plus wins.

So, as important as each-and-every win is to a program vying for a slot in the College Football Playoff, it’s equally crucial for an individual with serious Heisman aspirations.

It’s yet another case where relative schedule strength can make a big difference, giving one athlete a competitive advantage over the other based solely on the unique set of opponents he’ll build his with.

In non-conference play, the Buckeyes repeat with Oklahoma, but this time they get the Sooners at home in Columbus where they’ve only lost two games in five seasons. The balance of the non-Big Ten slate is Army and UNLV. From across the league in the West, they have road dates with Nebraska and Iowa, but avoid Wisconsin and Northwestern, considered by many to be the front-runners in the division.

Ohio State’s schedule was ranked at No. 20 coming into the 2016 season. Barrett didn’t receive a vote in last year’s Heisman race but did finish fifth in the 2014 vote.

Last year’s Heisman winner, Vegas has Lamar Jackson at No. 3 in the running to repeat in 2017.

Louisville’s schedule is only two places more difficult than Ohio State’s. Though the Cardinals won’t play a highly ranked team like Oklahoma, they do double down on non-conference Power foes with Purdue and at Kentucky. From the ACC Coastal, they add a road trip to North Carolina to their annual game with permanent cross-division rival Virginia. They also get Florida State in Tallahassee, where they are 0-8 all-time.

The Cardinals schedule was ranked at No. 50 coming into Jackson’s Heisman season in 2016.

At the bottom of the odds, Jake Browning is tied with Georgia’s Nick Chubb and Florida State’s Deondre Francois on Vegas’ early list.

Washington’s only Power opponent outside of Pac-12 action is Rutgers, which it gets on the other side of the country in New Jersey. From its own division, it plays Stanford on the road and Oregon at home in Seattle. On the cross-division slate, the Huskies draw Colorado and Arizona on the road and UCLA and Utah at home. Though the Buffs, Bruins, and Utes will likely be a part of the title race in the South, Washington avoids USC which should start the season ranked in the Top Ten.

Browning finished sixth in last year’s Heisman voting when the Huskies’ schedule was similarly ranked at No. 56.

Saquon Barkley rushed for 1,496 yards and 18 touchdowns as a sophomore last season. It earned him a No. 14 finish in the FBS in yards and a tie for No. 7 in touchdowns.

In non-Big Ten play, Penn State repeats with Pitt who it fell to last season by three points – only this time they’ll play at home in State College. From the West, the Nittany Lions avoid Wisconsin (like Ohio State), but have road games at Iowa and at Northwestern paired with a home game vs. Nebraska. The real kicker is in their own division where they’re set to play three-straight games (from Oct. 21 – Nov. 4) vs. Michigan, at Ohio State, and at Michigan State.

Penn State’s schedule was ranked No. 42 in 2016, Barkley didn’t receive mention in the Heisman vote.

Vegas has Baker Mayfield as it’s No. 2 pick for the 2017 Heisman, second to only USC’s Sam Darnold.

After opening-up at home vs. UTEP, Oklahoma travels to Ohio State, which should be ranked in the Top 5. The Sooners are 1-0 all-time in Columbus, but haven’t played there since 1977. Though they host Texas Tech, TCU, and West Virginia in Norman, Baylor, K-State, and Oklahoma State are all road games.

Oklahoma’s schedule was ranked No. 19 coming into 2016, Mayfield finished a distant third in last year’s Heisman vote. He also received mention at No. 4 in 2015.

Given that two Alabama running backs have won the Heisman in the last nine years, it’s logical that Vegas would give the Tide’s rusher the edge over their quarterback in the odds.

Alabama opens the season with the juiciest non-conference game of the season – vs. top-ranked Florida State in Atlanta. Beyond that, the Tide have Fresno State, Colorado State, and FCS Mercer out of SEC play – all non-issues. Packaged with its permanent cross-division rival Tennessee, Alabama draws a game at Vanderbilt from the SEC East – avoiding Florida and Georgia completely. Though the Tide travel to Texas A&M and Auburn, they get LSU and Arkansas at home.

Alabama’s schedule was ranked No. 3 coming into 2016, meaning it drops 25 slots for 2017. Last year was the first Heisman vote since 2012 that a member of the Crimson Tide offense wasn’t mentioned. Instead, senior defensive lineman Jonathan Allen finished seventh.

Unfortunately for senior running back Nick Chubb, Georgia’s offensive line ranks No. 97 nationally in previous starts. There are only two SEC teams with less experience at O-line than the Bulldogs – Vanderbilt and Mississippi State.

As is often the case, Georgia doubles-up on non-conference Power opponents this season – adding a historic road trip to Notre Dame to its standing date with Georgia Tech. What keeps the Bulldogs’ schedule strength from soaring even higher is drawing Mississippi State as the rotating opponent from the West. Though they’ll still have to play their regular gig with Auburn, they avoid Alabama, LSU, and Texas A&M.

Georgia’s schedule was ranked No. 57 last season, earning it one of the top ten biggest jumps in strength vs. 2016. The last time a Bulldog was mentioned in the Heisman vote was in 2012 when linebacker Jarvis Jones finished tenth.

The chances of Florida State going unscathed through the 2017 season aren’t good. It’s the only team set to play both programs who participated in last year’s College Football Playoff Championship game.

The Seminoles open the season with Alabama in Atlanta. As is the case with Georgia, not only did it schedule a one-game series with a quality non-ACC opponent, it pairs it with a long-standing rivalry game from out of conference. In FSU’s case, it means a road trip to Florida in the regular-season finale. Clemson is also an away game.

The good news is the Seminoles get their permanent cross-division rival, Miami (Fla.) at home and they draw Duke as their rotating opponent from the Coastal. They avoid Virginia Tech, Pitt, and North Carolina.

Florida State’s schedule was ranked similarly last season, coming in at No. 14. A Seminole player has been mentioned in the Heisman vote every year since 2012, last year’s representative was running back Dalvin Cook, tied for the tenth most votes.

What stands between Vegas’ No. 1 Heisman candidate and the trophy is the 11th most difficult schedule in college football.

USC’s three non-Pac-12 opponents for 2017 are Western Michigan (which won the MAC last season and finished ranked No. 15 in the final AP), Texas, and at Notre Dame. From the North division, it draws Stanford, Cal, Washington State, and Oregon State. Though it avoids Washington, it’s won three of the last four over the Huskies vs. dropping three straight games to Stanford.

The Trojans’ 2016 schedule was ranked No. 1 in the nation, they haven’t had received a Heisman vote since 2012 when wide receiver Marqise Lee finished fourth.

No Heisman candidate has a tougher road to glory than does LSU’s Darrius Guice. As a sophomore in 2016, Guice averaged 7.58 yards per carry, the 11th best mark in the FBS.

The Tigers technically double-up on Power opponents for the first time since 2011, opening-up with BYU in Houston and then hosting Syracuse in Week 4. Though they draw Texas A&M and Auburn at home in Baton Rouge, they play Alabama and Ole Miss on the road. The real kicker comes in the cross-division schedule, where it adds Tennessee to its regular date with Florida. It’s the toughest combo they’ve faced since drawing Georgia/Florida in 2013.

LSU’s schedule was ranked No. 11 coming into 2016. It’s most recent Heisman candidate was in 2015 when running back Leonard Fournette finished at No. 6.

Josh Allen of Wyoming may jump many of these guys. A lot of NFL scouts think he is by far the best QB for the 2018 draft. If he does well against Iowa in the opener and Oregon (a home game!) a few weeks later, there is a good chance he can tear it up the rest of the season in against G5 competition. He is my sleeper.