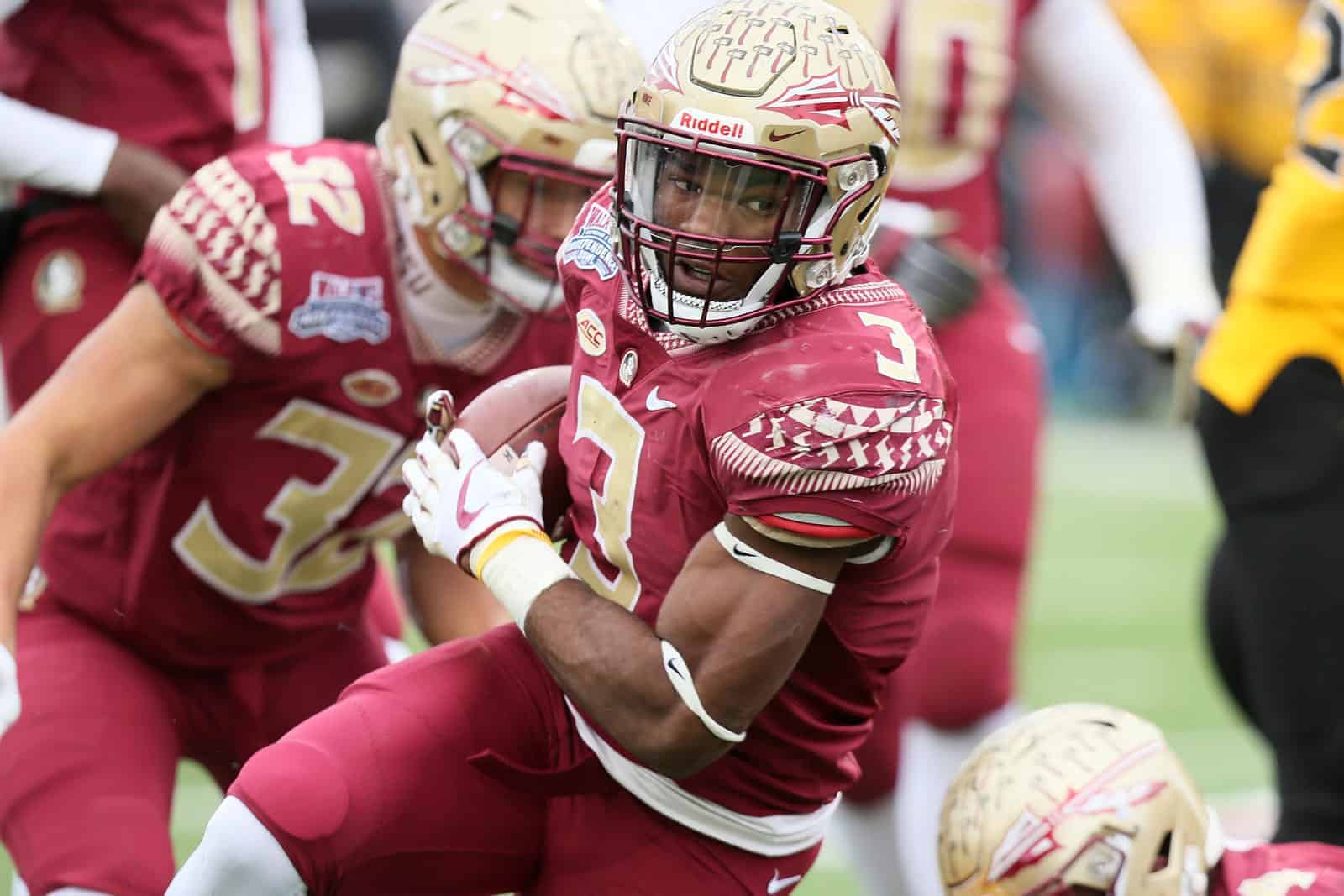 Phil Steele’s preseason magazine is finally hitting the stands, which means we get a first look at his much-anticipated schedule-strength rankings.

Steele uses a comprehensive approach to rate schedule strength, going way beyond the NCAA’s practice of ranking difficulty based solely on win/loss records from the previous season.

Though there are an endless number of ways to applying Steele’s rankings to predict outcomes in 2018, we’re going to start with the race for the Heisman trophy.

No top Heisman candidate has an easier path to potential glory than UCF’s McKenzie Milton, also the only Group of 5 athlete on our list.

Even though Knights’ have two Power opponents (North Carolina and Pitt) slated for the first time since 2016, Milton will still face at least six fewer Power foes than his counterparts.

Justin Herbert will benefit from playing for one of only six Power programs who won’t face a Power opponent out of conference this season. The Ducks’ non-Pac-12 slate consists of consecutive home games vs. Bowling Green, FCS Portland State and San Jose State.

On top of that, Oregon avoids USC completely. Steele has the Trojans at No. 16 in his preseason Top 40, the highest ranking for any member of the South division.

Things line up amazingly well for Wisconsin’s Jonathan Taylor, Vegas’ No. 1 pick to win the 2018 Heisman who’s also playing the third-easiest slate in the race. The Badgers play consecutive home dates vs. Western Kentucky, New Mexico and BYU (technically the non-conference Power opponent) to start the season. They travel to Iowa but get Nebraska and Minnesota at home in Madison.

From the daunting Big Ten East, Wisconsin has a date at Michigan and hosts Penn State but avoids Ohio State and Michigan State all together.

Vegas’ No. 6 pick, Khalil Tate has an easier schedule than all the candidates ranked higher than him except for Wisconsin’s Taylor. That said, the Badgers’ schedule is only rated three slots easier than Arizona’s.

The Badgers and Wildcats share independent BYU as their only “Power” opponent out of conference play. Arizona picks up Houston and FCS Southern Utah for the balance of their non-Pac-12 slate. In cross-divisional action, it won’t play Washington or Stanford from the North – the divisional frontrunners who Steele has at No. 4 and No. 15 respectively.

Speaking of top-ranked Washington, Jake Browning might not be on the top of Vegas’ odds, but he’s got the ideal schedule to move him up the charts as the season plays out.

The Huskies open against Auburn in Atlanta, an excellent opportunity for a signature win. FCS North Dakota and BYU round out the non-conference schedule. They get Stanford at home and, like Oregon, won’t play USC in cross-division play during the regular season.

Both of Georgia’s representatives on the Heisman list will have the benefit of playing what Steele has as the second-easiest schedule in the SEC. The Bulldogs play FCS Austin Peay, Middle Tennessee, UMass and Georgia Tech outside of conference play. From the West division, they add a game at LSU to their regular-date with Auburn. Though a trip to Baton Rouge is no picnic, Georgia won’t square off with Alabama in the regular season.

With the second-easiest schedule in the Big Ten, Ohio State’s Heisman potential is unlimited in 2018.

The Buckeyes play Oregon State, TCU (in Arlington, Texas) and Tulane out of conference. They get Michigan at home and must travel to Penn State and Michigan State. From the West, they avoid top-ranked Wisconsin (Steele has the Badgers at No. 6), instead hosting Nebraska and Minnesota in Columbus and playing a road date at Purdue.

Steele has Alabama’s slate as the easiest among SEC-West members in 2018. The Tide open with Louisville in Orlando and round out their non-conference slate with home games vs. Arkansas State, Louisiana and FCS The Citadel. They get Auburn and Texas A&M at home and also get Mizzou in Tuscaloosa as their rotating opponent from the East division.

The road to a first-ever Heisman for Clemson won’t be easy. First, the Tigers double-up, again, on non-conference Power opponents, this time adding a road trip to Texas A&M to their regular date with South Carolina. Though it must travel to Georgia Tech and Florida State, Clemson has the benefit of drawing Duke as its rotating opponent from the ACC-Coastal.

Vegas’ No. 2 pick, Stanford’s Bryce Love has a Top 30 ranked schedule in 2018.  The Cardinal get Notre Dame in South Bend and play additional road dates at Oregon, at Washington and at UCLA. The upside is getting USC at home, where it has beaten the Trojans three out of the last four tries.

Penn State’s quest for its first Heisman in 45-years will have a lot to do with cross-division play. The Nittany Lions draw Wisconsin and Iowa from the West this season, the divisional frontrunners and No. 6 and No. 26 respectively in Steele’s preseason rankings. The good news is they get both at home.

From its own division, PSU has Ohio State and Michigan State in Beaver Stadium but must travel to Ann Arbor to play Michigan. The real test in non-Big Ten play is a Week 2 road trip to Pitt.

Drew Lock finished last season ranked No. 10 nationally in yards per game (304.9) and No. 4 in passer rating (165.67). To get an invite to the Heisman Trophy presentation in New York this December, he’ll have to add to his statistical resume against what Steele has as the fourth most-difficult schedule in the SEC.

Though Missouri’s non-conference schedule is doable (at Purdue and vs. Memphis are the biggest tests), it’s got road trips to South Carolina, Alabama, Florida and Tennessee this season.

Two slots away nationally from Mizzou, Jarrett Stidham and his Tigers have, according to Steele the third-hardest slate in the SEC.

Auburn can’t afford to start slowly, getting Washington in the opener in Atlanta. It hosts LSU and Texas A&M at home but must travel to both Alabama and Georgia. The combination of the Huskies, Crimson Tide and Bulldogs amounts to playing three members of the preseason Top 5.

Oklahoma’s top rusher from last season is one of only four Heisman candidates to play a top 20 ranked schedule in 2018.

The Sooners’ only real test in non-conference play comes via a visit from UCLA in Week 2, the new-look Bruins will be in only their second-ever game under head coach Chip Kelly. The rest of the schedule comes down to how good the Big 12 really is – Steele has Texas at No. 10, TCU at No. 20, West Virginia at No. 30 and Kansas State at No. 39.

West Virginia’s Will Grier is part of an offense that returns seven starters to a unit that finished 2017 ranked No. 13 nationally in passing yards per game.

Standing between the Mountaineers and any lasting glory is a schedule Steele has as the No. 2 hardest in the Big 12. First up, WVU doubles down on non-conference Power opponents, meeting Tennessee in Charlotte in the opener and then traveling to NC State in Week 3. It gets K-State, TCU and Oklahoma at home but must visit Texas Tech, Iowa State, Texas and Oklahoma State.

One of only two top Heisman candidates with a Top 5 ranked schedule, Cam Akers will have to earn every vote potentially cast in his favor in this year’s race.

Though the Seminoles open the season with a tough visit from rotating cross-division opponent Virginia Tech, the real test comes in the last five weeks of the season. FSU hosts Clemson on Oct. 27, travels to NC State on Nov. 3, visits Notre Dame on Nov. 10, hosts Boston College on Nov. 17 and then finishes by hosting Florida on Nov. 24.

Keep in mind that the last two Seminoles-Wolfpack games have been decided by fewer than seven points and that FSU fell to BC as recently as last season.

The early Heisman candidate with the toughest schedule in Steele’s rankings is Michigan’s Shea Patterson.

The Wolverines open the season at Notre Dame and have divisional games at Michigan State and at Ohio State. From the West, they draw Nebraska, Northwestern and Wisconsin – three of the top four teams in the division.

Patterson will be easily overshadowed by Lewerke

Michigan will underachieve yet again this year……

I love how people continue to hate on Michigan. Keep hating haters!