Ranking the SEC’s Cross-Division Schedules in 2016 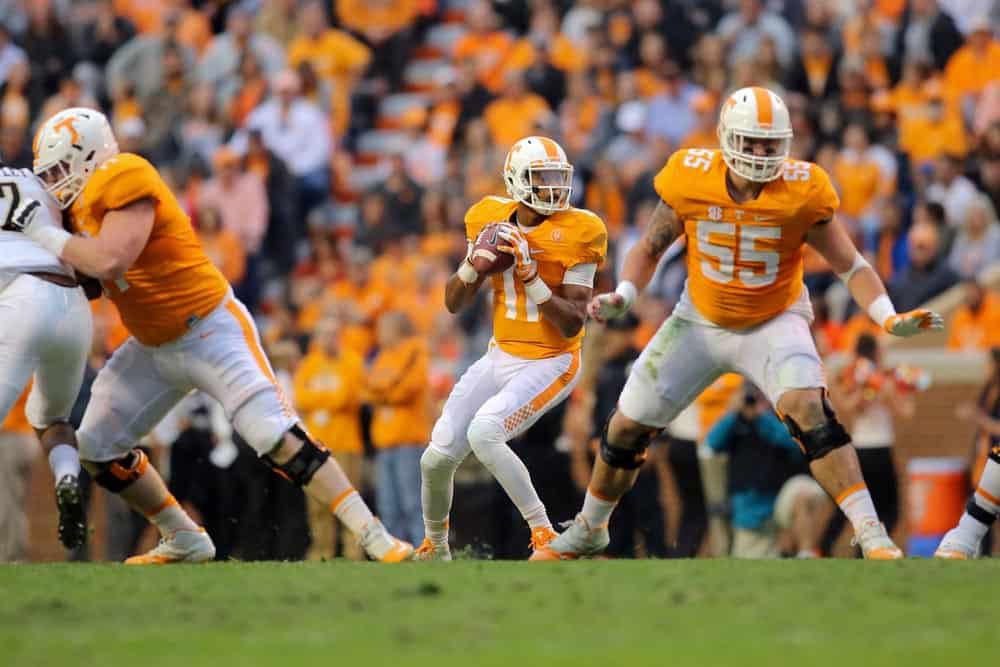 After evaluating the ACC, Big Ten and Pac-12’s cross-division schedules, this week we arrive at the SEC.

Each of the 14 SEC programs play eight conference games, six against their own division members and two from the opposite division. One of the two cross-division opponents is a permanent rival, established by conference back in 2012.

Though this means there is only one rotating cross-division opponent each season, the composite level of difficulty still changes each year.

Rankings are based on last season’s performance and projections for this year via Phil Steele. The asterisk denotes each team’s permanent cross-division rival.

While there is no easy cross-division schedules for members of the SEC East, South Carolina has what’s arguably the weakest.

Steele has the Aggies and Bulldogs in a three-way tie at No. 5 with Arkansas, representing the bottom half of what’s a stacked West. Additionally, Texas A&M and Mississippi State combine for the lowest winning percentage (65.38%) in 2015 of any cross-division combo from the West.

According to Steele’s projections, Vandy draws the No. 3 (Ole Miss) and No. 4 (Auburn) teams from the West.

Georgia gets the reverse of Vandy’s slate, traveling to Ole Miss and hosting Auburn.

Since the Rebels should be the better team, and are 12-2 at home over the last two seasons, the Bulldogs’ schedule edges the Commodores’.

2016 Cross-Division Opponents: LSU* and at Arkansas

Steele has LSU tied with Alabama for first in the West, but has the Tigers at No. 4 nationally vs. the Tide at No. 2.

Either one will be tough, but it’s definitely Alabama that earns the highest confidence rating based on its mere five SEC losses since 2011.

Along with LSU, Florida travels to Arkansas. Steele has the Razorbacks tied for No. 5 in the division and No. 42 overall. With nine returning to a starters to a defense that ranked No. 12 nationally vs. the run, they may not vie for a conference crown, but they will be a tough challenge.

It’s worth noting that the Gators have won nine straight over Arkansas, last losing in the 1982 Bluebonnet Bowl in Houston.

2016 Cross-Division Opponents: at LSU and Arkansas*

Missouri has the same slate as Florida but will work with the disadvantage of traveling to LSU as opposed to hosting it.

Any fantasies of Kentucky rising above the .500 mark in Mark Stoops’ fourth season will be metered by a road trip to Alabama to go along with the annual clash with Mississippi State.

The Tide have only lost once at home in the last three years and the Wildcats have never won in Tuscaloosa, they’re 0-9 all-time there.

At the top of the heap is Tennessee, a program that’s primed to make a run in 2016. Any accolades will be hard earned with both the Aggies and Tide on the schedule.

While it helps that permanent-rival Alabama is a home game, Tennessee hasn’t beaten the Tide in Knoxville since 2006, dropping four straight since then. As for the Aggies, Steele has them as a wildcard, tied at No. 5 (with Arkansas and Mississippi State). The big question is whether A&M can overcome having the second-least experienced offensive line in the SEC.

Mississippi State draws the two Eastern teams that finished under .500 last year, both South Carolina and Kentucky went 5-7. It gives them the only cross-division combo in the entire SEC to have a losing record in 2015.

Steele projects South Carolina will continue to struggle and finish dead last in the division while Kentucky will stick around at No. 5.

2016 Cross-Division Opponents: Georgia and at Vanderbilt*

Even though Steele has Georgia as the stronger team than Florida coming into 2016, Ole Miss and Auburn’s schedules take a hit with Vanderbilt.

Steele has the Bulldogs tied for No. 2 in the East and No. 23 nationally vs. the Gators shared No. 2 in the division and No. 34 overall. Vanderbilt has won just two SEC games and one road game in Derek Mason’s first two season at the helm.

2016 Cross-Division Opponents: Vanderbilt and at Georgia*

Auburn earns a slight advantage over Ole Miss by traveling to Georgia as opposed to hosting it.

The Tigers have dropped two straight to the Bulldogs and lost four of the last five. They’re also 0-2 in their last two meetings with the Commodores, but haven’t played them since 2012.

2016 Cross-Division Opponents: Florida and at Missouri*

Arkansas/LSU earn an edge over Ole Miss/Auburn by pairing front-runner Florida with Missouri instead of Vanderbilt.

Mizzou plummeted to 5-7 last season, but should have one of the best defenses in the country in 2016. The big questions are on offense and on the sidelines with new head coach Barry Odom.

2016 Cross-Division Opponents: Missouri and at Florida*

LSU lands at No. 3 by virtue of traveling to Florida as opposed to hosting it.

The Tigers have won three straight over the Gators in Baton Rouge, last falling in 2009. They’ve never played Missouri during the regular season.

Texas A&M and Alabama find their way to top of the East because of Steele and other prognosticators’ overwhelmingly positive opinion of the 2016 Tennessee Volunteers.

Steele projects Tennessee will not only win the East, he has them at No. 7 overall, sandwiched between Ohio State and Washington.

What costs the Aggies, in having a more difficult schedule, is South Carolina. After crashing to 3-9 last season, Steele has the Gamecocks finishing dead last again this year.

2016 Cross-Division Opponents: Kentucky and at Tennessee*

At the top of the heap is Alabama. That means that arguably the best team in the West has what’s arguably the toughest cross-division combo from the East.

What’s so scary about the Volunteers? They return a whopping 17 starters from last year’s 9-4 product, making them the most experienced team in the entire SEC.

Kentucky went 5-7 last year, including scoring its first road win (at South Carolina) since 2010. Steele has the Wildcats projected at a respectable No. 5 finish in the East.