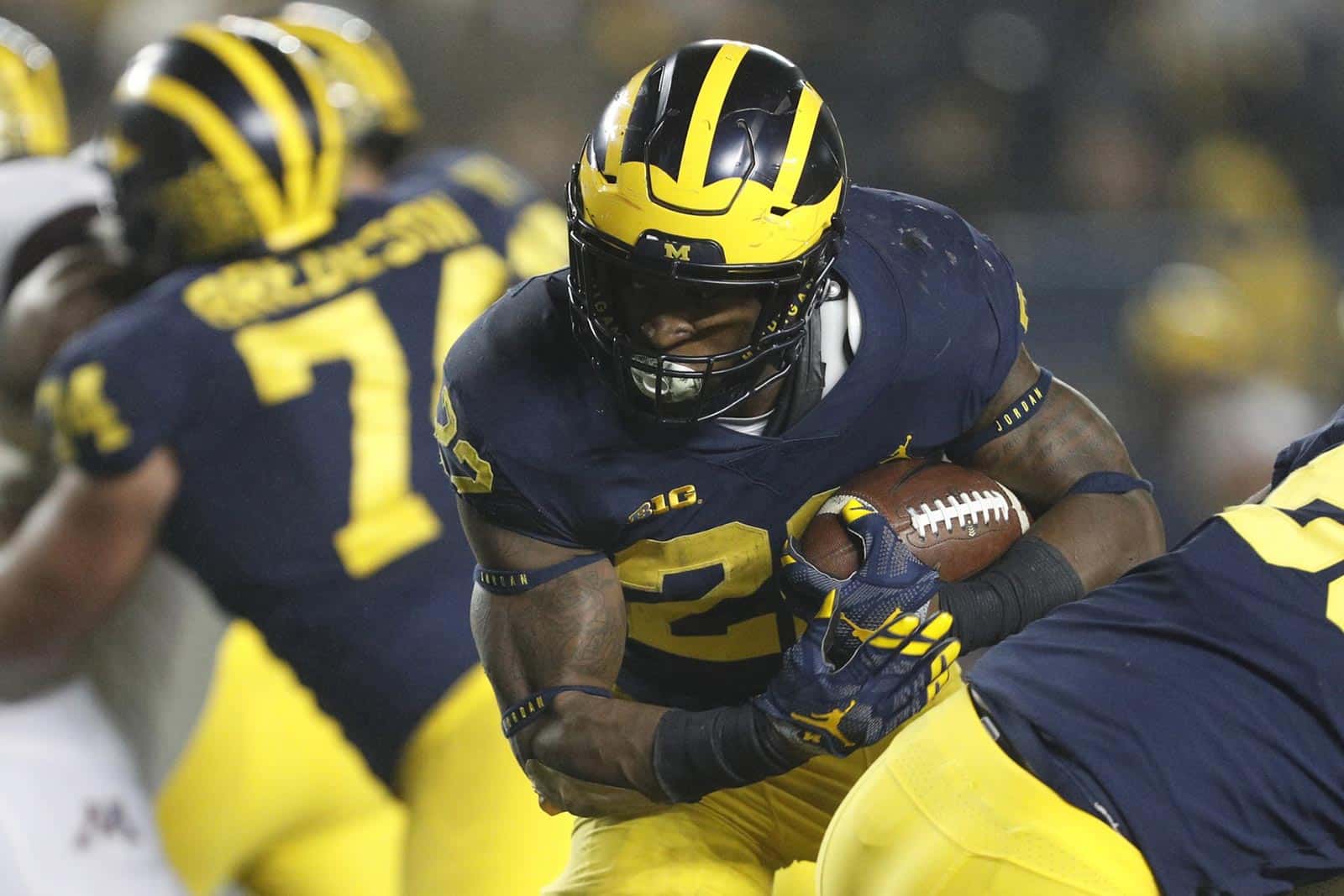 Wisconsin is ranked No. 7 in the Coaches’ Poll and has the easiest schedule in the Big Ten. Compare that to Michigan, ranked No. 14 in the preseason Top 25, but with the second-most difficult slate in the conference.

Even though schedule difficulty is only one variable in a successful season, it’s logical to contend that the Wolverines will have a stiffer test to reach the Big Ten Championship Game, and therefore the College Football Playoff bracket, than will the Badgers.

The following ranks the 25 teams mentioned in the Coaches’ preseason poll from the easiest schedule to the most difficult. The higher into the rankings, the bigger hurdles there are not just to climb the charts, but to stay ranked at all.

The Knights are slated to play just two Power 5 conference members in 2018 – at North Carolina and vs. Pitt. They do draw the two top dogs from the West – Memphis and Navy – in cross-divisional play, but temper that with a home game vs. SMU. UCF’s schedule is rated eighth in difficulty among the 12 members of the American Athletic.

Other than UCF, the only non-Power 5 member in the Coaches’ preseason Top 25, Boise State’s biggest game is a Week 3 date in Stillwater. The Broncos also host BYU in Week 10 and draw Fresno State and San Diego State – the two top picks from the West – in cross-divisional action. Their schedule is rated as the third-hardest in the Mountain West

Wisconsin is a Top Ten team with a schedule ranked one slot more difficult than Tulsa’s, who comes in at No. 66 in Steele’s rankings. At No. 70, Oregon is the only Power 5 school with an easier slate than the Badgers. The biggest test outside of Big Ten play is a Week 3 visit from BYU. They do get roadies in Ann Arbor and State College but avoid (3) Ohio State and (12) Michigan State from the East.

After Washington’s blockbuster opener vs. (10) Auburn it waits until November before squaring off with another opponent ranked in the Coaches’ preseason poll. It draws Utah, Arizona State, UCLA, and Colorado from the South, avoiding the only other ranked team in the Pac-12 in (15) USC.

The Hurricanes roll into 2018 with their highest preseason rank since 2004. Other than the test in the opener vs. (24) LSU, their non-ACC slate is underwhelming – vs. Savannah State and FIU and at Toledo. They draw Boston College as their rotating cross-divisional foe from the Atlantic, meaning they won’t have to deal with (2) Clemson. Their schedule is rated as the second-easiest in the ACC.

Ranked just one slot more difficult than Miami’s, Virginia Tech’s schedule features an opening game in Tallahassee and a Week 6 visit from Notre Dame. It gets the Hurricanes, Yellow Jackets, and permanent cross-division rival Boston College at home in Blacksburg.

Georgia’s schedule is rated as the second-easiest in the SEC. It’s annual meeting with Georgia Tech is the only test in non-league play, more than balanced out by home games vs. Austin Peay, Middle Tennessee, and UMass. It does draw (24) LSU as it’s rotating opponent from the West but won’t play (1) Alabama or (18) Mississippi State in the regular season.

Ohio State adds a Week 3 game vs. the No. 16 Horned Frogs to its tests against the other highly-ranked members of the Big Ten’s East division. It draws Minnesota, Purdue, and Nebraska from the West, avoiding top contenders (7) Wisconsin and Iowa all together. Overall, it’s rated as the third-easiest schedule in the Big Ten.

According to Phil Steele, the top-ranked Crimson Tide have the easiest slate in the SEC West. They open with unranked Louisville in Orlando, Fla. and then won’t play an opponent mentioned in the Coaches’ preseason poll until the Nov. 3 date in Baton Rouge. They draw Missouri as their rotating foe from the East, meaning that the only way they’ll face (4) Georgia or Florida is in a potential SEC title game matchup.

As is customary, Clemson doubles-up on Power non-ACC opponents in 2018, adding a trip to Texas A&M to its annual grudge match with South Carolina. That said, as of now, the Tigers have just one ranked foe on their schedule, the Oct. 27 road trip to Tallahassee. They draw Duke as their rotating opponent from the Coastal, avoiding (8) Miami Fla. and (17) Virginia Tech.

The Cowboys’ slate is rated as the easiest in the Big 12 ranks. Though they host (22) Boise State in Week 3, they are one of only six Power schools who won’t play a Power opponent outside of conference action. Expect OSU to rise through the ranks early, with a backloaded schedule it won’t start playing the top half of the Big 12 until Texas visits on Oct. 27.

Mississippi State’s biggest test in non-conference action is a Week 2 road trip to Kansas State, a middle-of-the-pack Big 12 member. From the East, the Bulldogs host Florida and play at permanent rival Kentucky. Road trips at (1) Alabama and (24) LSU (they’ve won only once in Baton Rouge since 1992) amp up the difficulty. It’s rated as the fourth-hardest slate in the SEC.

USC is one of only a handful of programs to play 11 Power opponents in the regular season – its only non-Power opponent is the opener vs. UNLV. The upside is that the Trojans avoid (6) Washington from the North in cross-division play.

Stanford’s schedule is a couple of notches more difficult than (15) USC’s because of the roadie at Washington, a tougher test, at least from the far-off preseason, than the Trojans’ date at (21) Texas. The Cardinal also draw Utah from the South, the team most likely to give USC a run for its money in the divisional race.

In addition to facing the other ranked members of the West, Penn State draws (7) Wisconsin and Iowa from the East division, the two frontrunners from the other side of the Big Ten. Where it gets a break is that all but one of the toughest games – the Week 10 date in Ann Arbor – are at home in State College. The biggest non-conference test is a Week 2 road date at Pitt.

Steele has Auburn’s schedule as the third-most difficult in the SEC. First up, the Tigers open with a Top Ten opponent in (6) Washington in Atlanta. Next, their permanent rival from the East is another top tenner in (4) Georgia, who they get on the road. Finally, Auburn gets (1) Alabama in Tuscaloosa, where its dropped three-straight. That’s three potential Top Ten foes, none of them at home. The only relief is drawing Tennessee as the rotating opponent from the East.

In addition to playing the three top-ranked members of its own East division, the Spartans have a road date to Arizona State booked for Week 2 and a trip to Nebraska in Week 12. They do avoid (7) Wisconsin and Iowa from the West.

Oklahoma’s schedule rating is boosted because of the Big 12’s cumulative strength, confirmed by the fact that five of its members are listed in the Coaches’ preseason Top 25. The Sooners’ non-conference slate is home dates with UCLA, Army, and FAU – completely manageable for a team expected to contend for a Playoff slot. The downside is that they only have one true home date with the top of the Big 12 – the Week 11 rivalry match with Oklahoma State.

TCU adds a “neutral” game with the No. 3 Buckeyes to its list of Big 12 foes. It also gets (21) Texas and (20) West Virginia on the road. The Horned Frogs will have to be ready early with Ohio State and the Longhorns coming back-to-back in Weeks 3 and 4.

The toughest schedule in the SEC, LSU adds a neutral date in the opener with (8) Miami Fla. and draws (4) Georgia as its rotating opponent from the East to go along with its standing date with Florida. The glimmer of hope is that the Tigers only have one true road game among its five preseason ranked foes – the Week 3 visit to (10) Auburn.

Not only does Texas host (15) USC in Week 3, it opens against Maryland in Landover, Md. It makes it, like USC and West Virginia, one of the rare programs with 11 Power opponents slated in 2018. On the plus side, the Week 9 trip to (25) Oklahoma State is the only preseason ranked action that comes in the form of a true road game.

The Seminoles have up-and-comer (8) Miami (Fla.) as its permanent rival from the Coastal. Drawing the No. 17 Hokies – in the opener – as the rotating opponent means they’ll play every preseason ranked ACC member during the regular season. Add in a road trip to (11) Notre Dame and FSU will have to fight its way into the Top Ten.

Not only does Michigan draw top-ranked (7) Wisconsin in cross-division play from the West, it opens the season at (11) Notre Dame. The steep climb gets even steeper with (12) Michigan State and (3) Ohio State away from Ann Arbor. According to Steele, only UCLA (No. 1) and Purdue (No. 2) have more difficult schedules in 2018.

Auburn should be no lower than #3, behind MI and LSU. Big 12 seems rated too strong

The teams are ranked in order of their strength of schedule ranking from Phil Steele.