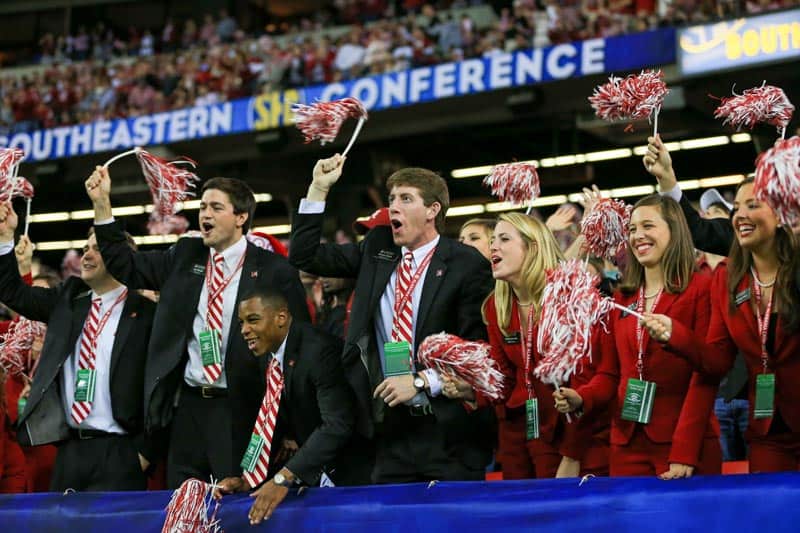 Was it just me, or were there a bunch of empty seats at the conference championship games this past weekend?

And remember, these weren’t meaningless bowl games, these were on-field battles for actual titles, rings and trophies. All fraught with meaning and all offering accolades that will be permanently attached, in a very good way, to a program’s historical record.

Here’s a look at the seven title games ranked by total attendance, what’s even more interesting is the percent of the venue each filled.

What do the numbers tell us about the state of college football, a sport that would otherwise seem to be peaking in popularity?

Only 15,000 brave souls travelled to Detroit to watch 10-2 NIU and 7-5 Bowling Green battle for the MAC title.

For Huskie fans it meant a five-hour drive, while for Falcons’ enthusiasts it meant only an hour-and-a -half car trip north on I-75. It couldn’t have helped that this game was on Friday night at 7pm, giving fans little or no time to make the trek after work.

Last season’s MAC title game—also between Northern Illinois and Bowling Green—drew 21,106 to Ford Field. But that game was between the 12-1 Huskies, ranked No. 16 and a 10-3 Falcons team. Additionally, the start time was pushed back to 8pm.

Would the MAC be better served to follow the lead of C-USA and the Mountain West, holding their title game at the home field of the team with the better record?

It’s hard to believe that 11-1 Marshall, playing for its first conference title since winning the MAC in 2002, couldn’t fill more seats for its showdown with Louisiana Tech. Especially since average home attendance in 2014 at Joan C. Edwards was 28,682, or 5,151 more than the conference championship game drew.

In fact, Saturday’s clash with the Bulldogs was the second-lowest turnout of the season, drawing only 135 more fans than the low mark, the Friday night, Nov. 28 game against WKU. Of course that resulted in a 67-66 overtime loss, but coming into the game the Herd were still undefeated and ranked No. 24.

Last season’s C-USA title game between Marshall and Rice drew 20,247 folks to Rice Stadium in Houston, a venue that holds 47,000.

Another surprise, Boise State couldn’t fill all its seats on Saturday night, despite the fact it had a ranked team vying for its first conference crown since 2012. The Broncos average home attendance this season was 33,570, or 7,469 more than the number that showed up for the title game.

In fact, it was the fewest number of fans who saw the Broncos play at home this season—1,377 fewer than the season-low 27,478 that turned up for the San Diego State game on Nov. 15.

Last seasons’ Mountain West championship, the first-ever such game, featured Fresno State and Utah State squaring off in Fresno. That game drew 31,362 fans—5,261 more than this year’s game—filling 76% percent of the seats at Bulldog Stadium.

And remember, this was a game between two Top Ten teams, on paper the best matchup of the seven title clashes.

Part of the issue may have been the distance between the schools and Levi’s Stadium, located south of San Francisco. For Ducks’ fans it meant an eight-hour car ride, due south, while for the Wildcats it meant an 800-mile, 12-hour trek.

The other detractor was the Friday night date, which may set it apart from the other games from a T.V. standpoint, but makes it difficult for the travelling fan or anyone with a nine-to -five job (the game kicked off at 6:20pm PST).

This was the fourth-ever playing of the Pac-12 title game and the first year at a neutral site, the league previously allowed the team with the best record to serve as host. To compare, in 2011, 59,376 fans watched Oregon beat UCLA in Eugene. In 2012, 31,622 fans watched Stanford beat UCLA in Stanford and in 2013, 69,535 were on hand to see Stanford best Arizona State in Tempe.

Even though the Big Ten had 4,579 fewer fans on hand for its title game than the ACC, its file rate was 8% higher, making it second only to the SEC in terms of the fewest empty seats.

Indianapolis is about five hours from Madison and only three hours west on I-70 from Columbus, making the trip doable for both fanbases, especially on a Saturday night.

Nearly 9,000 seats sat empty in this season’s ACC title game, also the gateway to perfection and a playoff slot for Florida State.

The ACC, like the Pac-12, features a wide geographic spread among its members. This game meant an eight-hour car trip for Seminole fans and a four-hour journey for the Yellow Jacket faithful.

Clearly attendance is better when Virginia Tech is in the mix, Blacksburg, Va. is only three hours from Charlotte.

While you would have expected this kind of crowd for Alabama-Georgia or Alabama-South Carolina, the Alabama-Missouri game sold out regardless of not looking like a blockbuster matchup on paper.

For Mizzou fans, attending this game meant 10 grueling hours in the car or an expensive four-hour plane ride. For Tide fans, it was a less expensive, and more familiar, six-hour trek to Atlanta.

The SEC has been hosting a conference title game since 1992 and has been in Atlanta since 1994, playing the first two contests in Birmingham, Ala. This year’s game drew 2,106 fewer fans than the 75,632 who packed the Georgia Dome last season to see Auburn and Missouri play and 2,098 fewer than the number that attended the 2012 Alabama-Georgia game.

In fact, and despite the sellout, it’s the fewest number of people to attend an SEC title game since 2006, when 73,374 watched Florida beat Arkansas 38-28.

Either way, you’ve got to give the SEC credit for filling its 70-plus thousand seats, something you’d expect it could do, but more impressive in light of every other conference falling short of the goal.

It is December, and fans likely have another event pencilled onto their calendar before knowing if their team is in a championship game. Fans might not make the trek on short notice to see their team in a CCG, using their limited resources (time, money) to travel to a bowl game instead. For a bowl game, people have 3+ weeks to make travel plans, and are perhaps more likely to work a vacation around the game.

Interesting information, but as we know these games are scheduled around the T.V. ratings, which really could care less of how many “fans” are attending or not. The evil four letter word (ESPN) has little regards to the number of fans in the stands, all they want to do is sell ad time to the somewhat blind and ignorant ad agencies. If we look at the order of when the games were played we may see some light to the attendance issue as well.
Game 1 – MAC Championship, Friday early evening – 15,110 (23%)
Game 2 – PAC 12 Championship, Friday evening – 45, 618 (66%)
Game 3 – Conference USA Championship, early Saturday morning – 23,711 (62%)
Game 4 – SEC Championship, mid-Saturday afternoon – 73,526 (100%+)
Game 5 – ACC Championship, Saturday evening – 64,808 (88%)
Game 6 – Big Ten Championship, Saturday evening – 60,229 (96%)
Game 7 – Mountain West Championship, late (even for PST) Saturday evening – 26,101 (71%)
Switch the start the date of the Big Ten and Pac 12 games around and I bet you would see the similar numbers, but for different Championship games. The SEC has earned the right to choice their date & time first and they have chosen the best slot in regards to all football. All others conferences choice in their pecking order and the numbers show it. [SEC, Big Ten, ACC, Pac 12, Big 12*, and the others].
If you want to see something of further interest, see how low the average attendance is at NBA games and yet how hyped up ESPN continues to market this show on the hardwoods. ESPN is selling their product to the Ad Agencies to believe they’re getting something for “their” dollar. It will all come crashing down someday maybe.

Sorry —- ESPN is “selling” their product and the Ad Agencies to believe they’re getting something for “their” dollar. Senior moment I guess. Billy

Yeah, as usual, news articles lack perspective in every way shape and form. As shown by Billy, physical attendance corresponded with time placement of the game more then anything. Those times slots weren’t chosen to maximize attendence at the stadiums as they were to maximize TV viewership. The MWC can have the game late and have everyone tune in still thirsty for football after the other games (to incliude a game between K-State and Baylor this year) or they can bump it up a couple hours earlier to get half those empty seats filled at one stadium, but have a fraction of the veiwership on television, and ABC wouldn’t be showing the game.

And if you think that is crazy of them and it shouldn’t matter, there is one school that proves this is the way to go: Boise State. They played a season opener against Oregon on the Blue turf that everyone saw. Why were we all watching that game? Because it was the first game played out of ANY game that year on a Thursday and had no competition.

dawgman is spot on. It’s all about Television. Those who go to the game mean very little in today’s consideration of when a game will be played. The first consideration taken on ALL accounts is if the game will be on television and what time that network wants it. It’s just not ESPN or ABC making this happen, it’s; Fox, The Big Ten Network, The PAC 12 Network and so on. As much as I love going to games across this country and watching others on the television I’m dishearten by what direction it’s going. The direction is all aimed at what best suits the television executives.

As well, the A.D.’s of all schools are at the mercy of what they are being required of by the Networks. Their coaches are wanting TV time, as they believe it helps in recruiting and their own personal ego, but I believe in the long term it’s destroying the game we all love. This is a long in-depth topic that I hope we as College Football fans see and are aware of. What’s best for the short term may not be what is best for the long term.

Merry Christmas to all and Happy New Year.