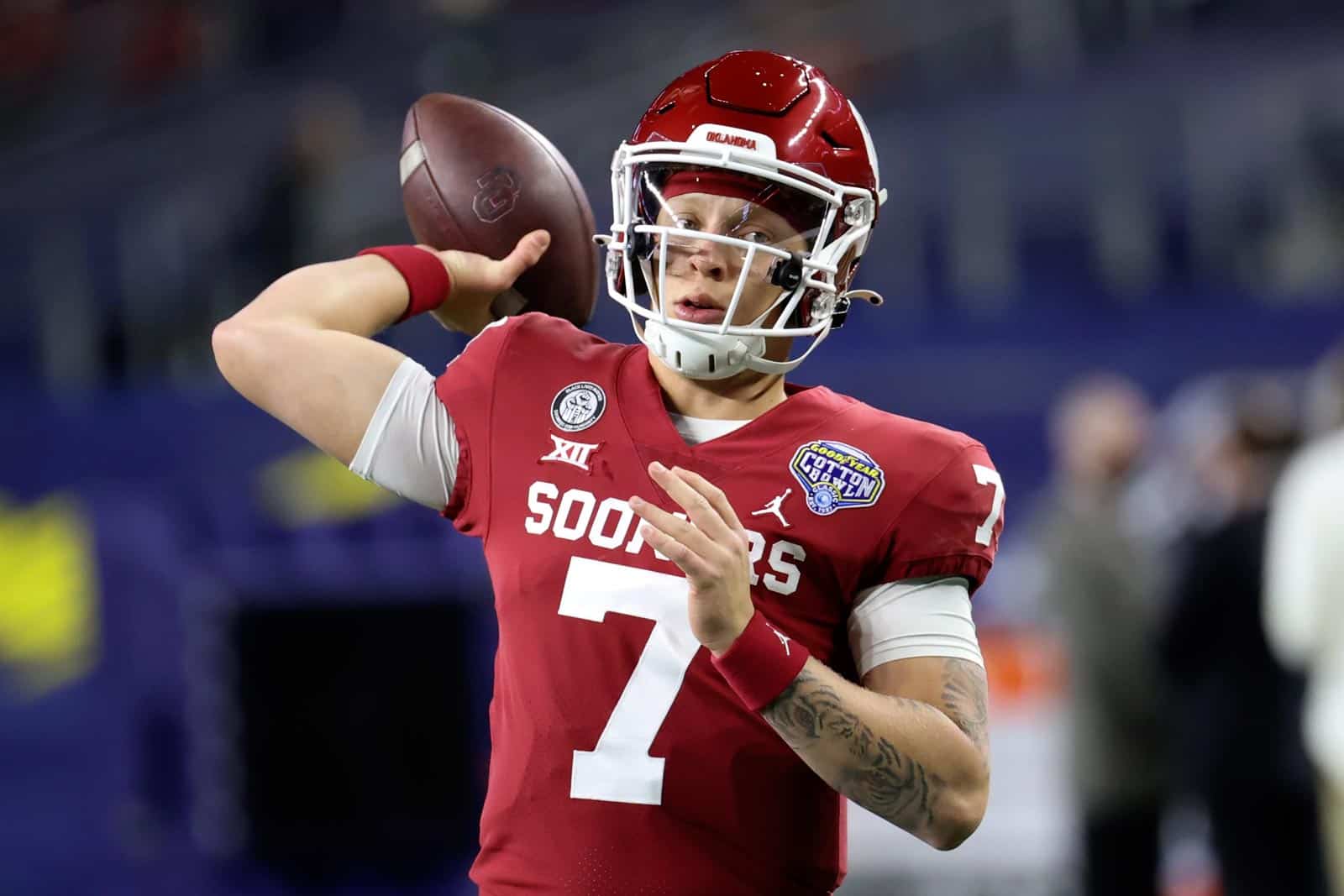 Which of Vegas’ nine top Heisman candidates – an all-quarterback list – will have the easiest path to the podium in 2021?

Combining Phil Steele’s schedule strength rankings with the oddsmakers’ latest predictions gives us insight into which athletes will have fewer obstacles standing between them and individual glory.

The easiest schedule among the top Heisman candidates belongs to (3) Clemson’s sophomore QB D.J. Uiagalelei who has two previous starts as a collegian (both last season in relief of Trevor Lawrence) – a comeback win over Boston College and a narrow loss at then (4) Notre Dame. Combined, the Tigers’ 2021 lineup posted a 48-60 (44.4%) mark last season, only 15 teams in the FBS have a set of opponents that finished lower. While they do face top-dog (5) Georgia in Charlotte in the opener, the Tigers draw a roadie at Pitt from across the ACC in the Coastal to go along with the annual fixture with Georgia Tech, avoiding (10) North Carolina and (14) Miami completely. Though they’ll travel to South Carolina for the regular-season finale, the Gamecocks are 6-16 since 2019 and have dropped six-straight to Clemson. Steele has the schedule as the third easiest among Power 5 members.

Only two teams in the SEC have schedules ranked easier than (5) Georgia’s – Vandy at No. 68 and Kentucky at No. 84. JT Daniels started the last four games in 2020, all wins for the Bulldogs but only one vs. a ranked opponent – the narrow win over then (6) Cincinnati in the Peach Bowl. Georgia does get fellow contender (3) Clemson in the opener in Charlotte but draws Arkansas as it’s rotating opponent from the West to go along with its standing date with Auburn, avoiding (1) Alabama, (16) LSU, and (6) Texas A&M. It gets Kentucky, Missouri, and South Carolina at home. Though the finale vs. Georgia Tech is in Atlanta, the Bulldogs have won ten straight there, last losing in 1999.

(14) Miami’s senior QB D’Eriq King finished last season ranked No. 22 in the FBS and No. 3 in the ACC in passer rating. With 538 rushing yards, he also finished No. 21 nationally in total offense. The Hurricanes’ schedule is middle of the road in difficulty in both the ACC (No. 8 out of 14) and nationally (No. 53 out of 130). While they do open with (1) Alabama in Atlanta, a loss to the Tide would be given a pass for both team and QB when considering any accolades. An upset win would be a catapult to greatness. The other challenge in non-league play is a Week 3 visit from Michigan State, but unlike the consistently double-digit winning Spartans of 2010-17, the last three products skidded to a 16-17 mark. In ACC play, it gets fellow Coastal contender (10) North Carolina on the road but avoids (3) Clemson in cross-division action by adding a home date vs. NC State to go with its annual pairing with Florida State (which hasn’t gone over .500 since 2017).

While (2) Oklahoma’s schedule is on par with (10) North Carolina’s (No. 50) and Virginia Tech’s (No. 52) nationally, it’s the easiest among Big 12 programs. It could be a perfect storm for sophomore QB Spencer Rattler, the Heisman frontrunner who finished his freshman season ranked No. 11 in the nation in passer rating. The Sooners’ non-conference schedule consists of a road trip to Tulane in the opener, a home date vs. FCS Western Carolina and then a visit from Nebraska. Though the reunion with their old conference rival is historic, the Huskers have posted four consecutive losing records and haven’t beaten a Top 25 opponent since edging then (22) Oregon at the beginning of the 2016 season. In Big 12 action, they get fellow contenders (7) Iowa State and TCU at home in Norman.

Sam Howell finished his sophomore season ranked No. 8 in the FBS in passer rating and No. 6 in TD passes. This year, he’ll face a non-conference schedule that includes a Week 9 roadie to (9) Notre Dame followed by a visit from Wake Forest (which is being played as a non-ACC game). In cross-division play, the Tar Heels draw struggling Florida State from the Atlantic to go along with their standing date with NC State, thereby avoiding (3) Clemson in the regular season. Though they’ll play Virginia Tech on the road (in the opener), they get (14) Miami at home in Chapel Hill.

Despite never playing a down of college ball, Vegas has (4) Ohio State freshman QB C.J. Stroud as the fifth-most likely athlete to win the Heisman. As per Steele, the Buckeye’s 2021 schedule is on par with Syracuse at No. 46 and NC State at No. 48 and is the second easiest in the Big Ten. The only non-conference threat is a home date with Oregon in Week 2 – though the Ducks earned the No. 11 slot in the opening AP rankings, they haven’t beaten a Top 25 team out of Pac-12 play since destroying then (2) Florida State in the 2014/15 CFP Semi-Final. In cross-division action they draw games at Minnesota, at Nebraska and vs. Purdue, avoiding (12) Wisconsin, (18) Iowa, and Northwestern (the three frontrunners) all together. Though they’ll travel to Michigan and (17) Indiana, the Bucks get (19) Penn State at home.

Matt Corral finished his sophomore season ranked No. 5 in the FBS in both passing yards per game and completion percentage – hanging 340-plus yards on the three top ten opponents Ole Miss faced last year. Though the Rebels’ 2021 slate is ranked in the top third of the nation in difficulty, it’s seventh among the 14 SEC members. The season opens with a date vs. Louisville in Atlanta, the Cardinals eager to rebound from a 4-7 mark in 2020. Also of note is a Week 10 visit from Liberty, fresh off a 10-1 campaign that included wins at Syracuse and at Virginia Tech and a one-point loss at NC State. In SEC play, Ole Miss adds a roadie at Tennessee to its standing date with Vandy from the East, thereby avoiding (5) Georgia and (13) Florida. While (1) Alabama and Auburn are away games, the Rebels get (6) Texas A&M and (16) LSU at home.

Vegas’ longest shot among the top Heisman candidates, Kedon Slovis also has the second-toughest schedule. Slovis finished last season ranked No. 6 nationally in passing yards per game and returns in 2021 along with seven fellow offensive starters. (15) USC does travel to (9) Notre Dame but tempers that with home dates vs. San Jose State (in the opener) and BYU (in the regular-season finale). From across the Pac-12 in the North, the Trojans draw Stanford, Washington State, Oregon State and Cal, totally avoiding the two favorites (20) Washington and (11) Oregon. They also get (24) Utah at home but travel to (25) Arizona State.

(1) Alabama’s Bryce Young has thrown just 22 attempts as a college QB but is, as per the oddsmakers, the second-most likely candidate to win the Heisman. He’s also the only one of Vegas’ top Heisman contenders to play a schedule ranked in Steele’s Top 20. The Tide opens the season against (14) Miami Fla. in Atlanta – also the only Power 5 foe in non-league play. From across the SEC in the East, it draws a tough roadie at (13) Florida to go along with its annual date with Tennessee. Alabama travels to (6) Texas A&M and Auburn but gets (16) LSU at home.