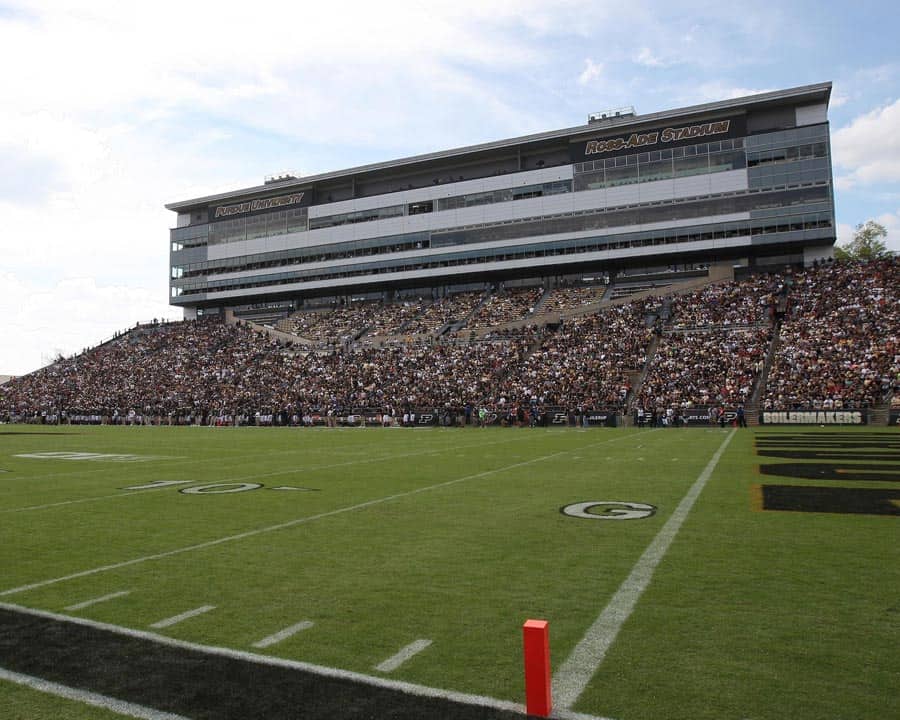 The Purdue Boilermakers and the Wake Forest Demon Deacons have scheduled a home-and-home football series for 2026 and 2027, the schools announced today.

In the first game of the series, Purdue will host Wake Forest at Ross-Ade Stadium in West Lafayette, IN on Sept. 12, 2026. The Demon Deacons will then host the second and final game at BB&T Field in Winston-Salem, NC on Sept. 2 or Sept. 4, 2027.

Purdue and Wake Forest have met five times on the gridiron. The Boilermakers won the last meeting 16-10 in 2003 to extend their overall lead in the series to 4-1.

Purdue now has two non-conference games set for the 2026 season. They are also set to face Notre Dame at a neutral site to be determined at a later date. Wake is their first announced opponent for 2027.

For the Demon Deacons, Purdue is their first scheduled opponent for both 2026 and 2027.

It is nice to see a meaningless game between 2 has beens (or never was) scheduled this far in advance. Has ESPN signed on yet to pick up this blockbuster?

Hey clueless. Not scheduling games in advance is why the SEC yearly plays the least P5’s, It’s why more than half of the vaunted ..lol..SEC west played no P5’s last year. It’s why Bama is always crying we can’t find a game..it’s b/c they wait to 1 o or 2 years in advance when by then everybody has already completed their P5 scheduling/

schoup is right on in regards to scheduling in advance. I give Wake and Purdue credit for scheduling this P5 vs. P5 match-up. Who knows how good or bad they’ll be in those years, but at least they’re scheduling the appropriate match-ups. And please don’t say Purdue has never matter, I’m sure they’re a few quarterbacks in the NFL that wouldn’t want to hear that (i.e. Brees, of today and Greise of yesterday, plus others). The SEC has plenty of opportunities to make scheduling match-ups, a team like Kentucky can perhaps schedule a Minnesota in out years or something like that,it may not seem like a big deal, but would be in a proper direction. The SEC has got to step up, I know there’s the fear of not getting enough “bowl” teams in due to wins, but,,,

I agree Billy, in my opinion Kentucky should keep Louisville as a rivalry game every year as they are playing them continuously now. Kentucky vs Minnesota sounds like an awesome match-up due to the fact both teams are not the “best” when it comes to football, no offense to Gopher or Wildcat fans.

Thanks day, appreciate it. Here’s another interesting fact to take in.

Some people may think the 2017 season is way out there, but it isn’t. The 2017 kick-off for college football is only 30 months away and the proper scheduling should have already started. Most often, bad planning leads to bad excuses, and the SC excuse no P5 teams will play us is a crook.

Hey by the way, I’ll continue to give LSU credit. They are one of the few SEC schools that most often schedules ahead and properly. They’re the only SEC to have both their 2016 and 2017 NC schedule set to this point. Go Tigers!!!

The B10 went on scheduling spree in the future when they decided to go to 9 games. When you have 9 games some years you have 5 home games and some 4 in conference. You have to plan you OOC out in advance and carefully to make sure you play your P5 OOC at home in years you have 4 conf home games. Many programs don’t want to play 6 away games..5 in conference and 1 OOC. Also, with phasing out FCS they have to plan more b/c getting a FCS games late is easy, as some FCS schools sometimes will cancel a game vs another FCS to get a pay day. The B10 also has gone to scheduling more midmajors as away games, some in oure home and home, some as 2 for 1’s

schoup said…., You’re spot on. Agree with what you have said. As you have said, The B10 has done a good job of planning and scheduling ahead with some vision. Whereas The SEC apparently lacks that skill of vision in scheduling future years. I know it may read as though I’m negative on The SEC, but it’s truly only with their lack of comparable scheduling to their so-called peer conferences. When The SEC as a whole starts and continues to schedule a competitive schedule I’ll back off.

And when they play each other, they still will be irrelevant

It’s funny how you know what recruits they will have 11 years from now. I’m sure you have the 6 thru 9 yr old pop warner leagues scouted and where those kids will go.