Power Teams That Will Open 2015 with a True Road Game 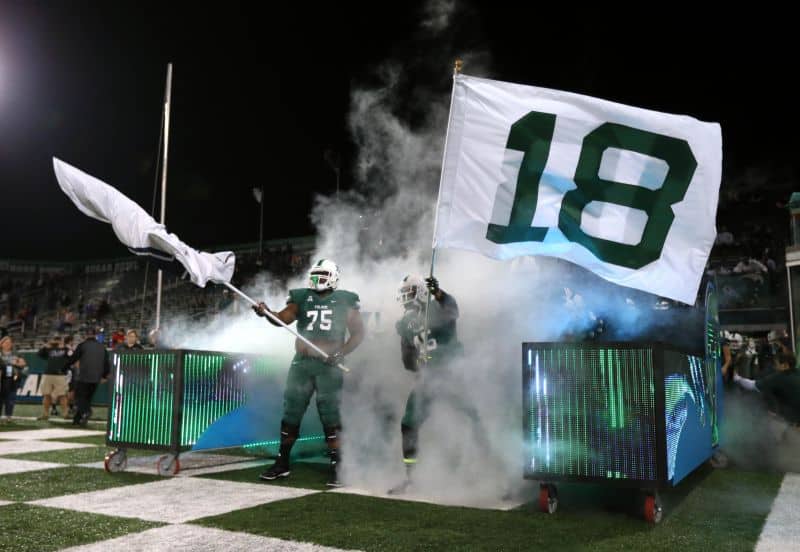 Tulane's Yulman Stadium will play host to the first "true" away game for a Power 5 team in 2015. (Chuck Cook-USA TODAY Sports)

Of the 64 members of the Power-Five conferences, how many do you think will open the season with a true-away game?

Half? A third? A quarter?

How about 15? That’s only 23% of the field, and it doesn’t include the five games that feature Power-Five teams at a neutral site.

By conference, the SEC only has one member kicking off the season with a true-road game, the ACC has just two, the Pac-12 has three, the Big 12 has four and the Big Ten leads the nation with five.

Take a look at the honor roll. Each of these teams will need to be ready to go early.

The Blue Devils haven’t opened up the season on the road since 2005, when they suffered a 24-21 loss at East Carolina in the first game of what was a 1-10 campaign. They haven’t won a season-opener on the road since 1988, when they traveled to Northwestern and won 31-21.

The first of the six Power teams to open up vs. a Power team on the road, Virginia hasn’t kicked things off with a true-road game since 2007, when it fell at Wyoming 23-3. The Cavaliers haven’t won such a game since triumphing at Temple in the 2004 season opener.

Virginia and UCLA’s first and only-ever meeting came last season when the two met in Charlottesville; the Bruins scored a narrow 28-20 win.

Baylor hasn’t opened with a true-road game since traveling to Wake Forest in 2009, a 24-21 win. The good news is SMU, located in Dallas, is only a 100-mile drive from Waco.

An oddball match-up in every sense of the word, Oklahoma State gets its season cranked up with a true-away game for the first time since 2008, when it made a trek to Seattle to beat Washington State.

It’s only fair to note that the Cowboys opened up the last two seasons with neutral games (Florida State in Arlington in 2014 and Mississippi State in Houston in 2013), so it’s not like they’ve been welcoming cupcakes to town to get things rolling.

Oklahoma State and Central Michigan have never met in football; the Cowboys are 4-0 all-time against the MAC.

The second of the six Power-Power road match-ups, TCU hasn’t kicked off its season with a true-away game since 2011 when they opened up at Baylor, a game it lost 50-48. It hasn’t won such a game since two years before that, in 2009 when it spent Week 1 in Virginia, beating the Cavaliers 30-14.

The Horned Frogs have squared off with Minnesota twice in history: last season in Fort Worth, a 30-7 TCU win, and in 1974 in Minneapolis, a 9-7 Golden Gopher victory.

The third of the six Power-Power road meetings, Texas hasn’t opened up with a true-road trip since beating Rice 34-17 in Houston in 2010. The Longhorns last traveled to a Power destination to open up the season in 1994, when they visited Pitt and won 30-28.

The fourth of the six true-road openers, Michigan opens with a road match for the first time since 1998 when they visited Notre Dame in Week 1 and lost 36-20. The Wolverines’ last such win came in 1991 when they traveled to Boston College and won 35-13.

The Spartans haven’t kicked things off on the road since 2008, when they headed out west to California and lost to the Golden Bears 38-31. The last time they won such a game was way back in 1984 when they triumphed 24-21 at Colorado. That team went on to a 6-6 record, including a 10-6 loss to Army in the Cherry Bowl (in Pontiac, Michigan).

Michigan State is 11-2 all-time vs. Western Michigan. The two have never met outside of East Lansing, and the Broncos haven’t won since 1919.

The fifth of the six Power-Power match-ups, Ohio State hit the road to open up the season as recently as last year, when they beat Navy 34-17 in Baltimore. Since that game was technically considered a neutral meeting, you have to go all the way back to 1998 to find the Buckeyes’ last true-road season-opener, a 34-17 win at No. 11 West Virginia.

Ohio State and Virginia Tech’s only previous meeting was in 2014, the Hokies scoring a stunning 35-21 upset victory over the then No. 8 Buckeyes.

Even though Penn State opened up the last two seasons at neutral locations (2014 vs. UCF in Dublin, Ireland and 2013 vs. Syracuse in East Rutherford, N.J.), it hasn’t kicked a season off with a true-road game since 1994. That year, it opened up with a 56-3 win at Minnesota, the first of 12 consecutive victories that resulted in a No. 2 ranking in the final AP poll. Nebraska (13-0) was awarded the National Championship that year.

Penn State is 39-3-1 vs. Temple; the last time the Owls won was in 1941 in Philadelphia. The two schools are located just under 200 miles apart.

The Boilermakers and Marshall have only met once before, in 2012 in West Lafayette; Purdue won 51-41.

The last of the six Power-Power openers, Stanford hasn’t kicked off a season away from home since winning 39-13 at Washington State in Week 1 of the 2009 season.

Washington is the only team on the list that also opened up last season with a true-road game, travelling to Hawaii for a 17-16 victory. Prior to that, it was a Week 1 road trip to BYU in 2010 that resulted in a 23-17 loss for the Huskies.

Washington and Boise State have met three times previously, but never in Boise. The Huskies won the two games in Seattle (2007 and 2013), but lost the 2012 Las Vegas Bowl.

Colorado is 2-1 vs. Hawaii; the only game in Honolulu was in 2011, also the Buffs only loss in the series.

The only SEC team on the list, Mississippi State last kicked off a season at another team’s home field in 2011, a 59-14 win at Memphis.

The Bulldogs have won three straight over Southern Miss, including their last visit to Hattiesburg in 1989. The Golden Eagles scored their most recent victory in 1988, the last of eight consecutive meetings in Jackson, Mississippi. The two schools are located 180 miles apart.

There is NOTHING true about Baylor at SMU.

And Suwanee right behind them. Surrrrrre. Right. Tulane now plays in a FCS-size on-campus stadium. They made the Superdome look empty for years. They’re not going to the XII, let alone the SEC.

Tulane’s Yulman Stadium has a capacity of 30k. There are only only 6 FCS schools that play in stadiums that large. 3 are old Ivy League schools which used to be major CFB teams in Yale, Harvard, and Penn. 1 is in an NFL stadium w/Tenn State at LP Field. 1 is in a stadium that was built for statewide use Jackson State at Mississippi Veterans Memorial Stadium. Norfolk State is the only other FCS school w/a 30k stadium.

How about BYU @ Nebraska? That’s a tough road game for the cougars…

byu is not part of the power 5

BYU is considered a Power 5 opponent by the ACC and SEC for scheduling purposes. This piece is about teams from Power 5 conferences that open the season on the road.

I agree, if the SEC considers BYU a Power 5 team then so do I. BYU at Nebraska will be a good one

So does the ACC. Anyone that’s played BYU knows they are power 5.

I have to agree with this one. Watching BYU dismantle my Yellow Jackets twice was enough to convince me.

The toughest game of all of these is Washington @ Boise State and Boise isn’t even considered a power team.

I think they should be. The pac should grab Boise and byu. Then the big 12 would be Screwed!

Other than Virginia at UCLA, I think you’re right. Top 20 team, all the way across the country. But UVA at UCLA is clearly the harder matchup on paper.

dave, I take it that you say this because UW is supposedly a poor team this fall and BSU should be better than them. UCLA, Minnesota, Notre Dame, Virginia Tech, and potentially Utah are all most likely better then Boise State this year. What you are saying is what you are saying “toughest match-up”. BSU is far from a P5 School, their Football has had a nice run, but will it last, and no other program in their school suggest P5 quality. My vote for toughest “match-up” would be the Longhorns at South Bend and as well most likely will be a more entertaining game to watch.

P-5 is a football designation. In other sports all of division 1 is just division 1 and includes not only the P5 and G5 but FCS as well. They all go to the same basketball and baseball tournaments.

I don’t think OSU-Navy was considered “neutral.” If it was, it would have aired on the ESPN family somewhere instead of on CBS Sports Network, which is Navy’s channel.

Given College Station’s proximity to Houston, Arizona State playing Texas A&M in the Advocare Texas Kickoff is a road game for the Sun Devils. It certainly doesn’t qualify as a neutral site except in name only.