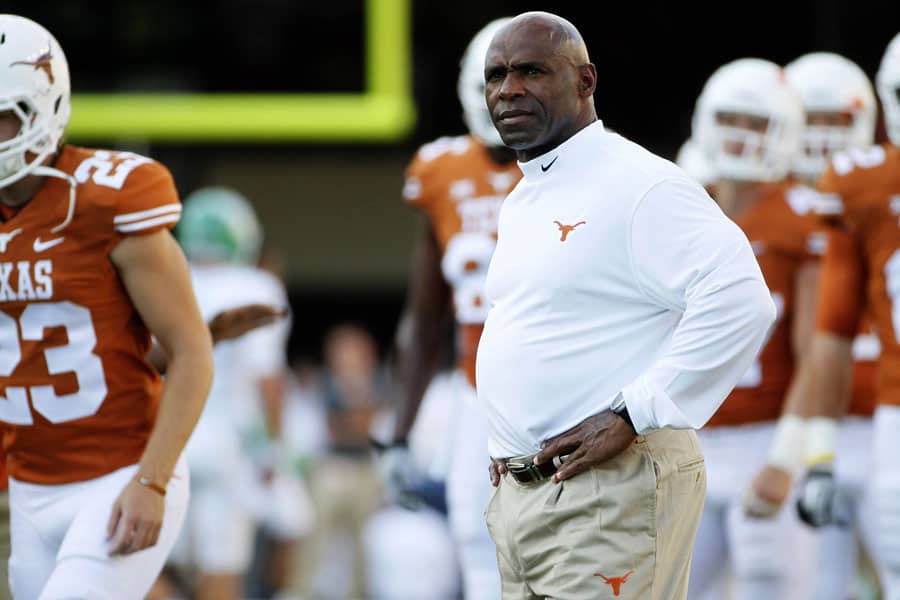 Like the Pac-12, Big 12 members play only three non-league games, but unlike the West Coast contingency, they play each of their fellow nine members once each season.

Does that give the Big 12 more street cred with the CFB Playoff committee than say, a win in a conference title game? Based on the final rankings in 2014, which left out both TCU and Baylor, no.

For 2015, all but two Big 12 members will play FCS opponents while only one club, Texas, will play two Power Fives. A whopping three Big 12 members won’t play a Power opponent out of conference play this season.

That equals 30 percent of the field, a number that is the highest among the Power conferences. The only leagues that come close are the SEC with four of its 14 members not playing a Power team out of conference and the Pac-12 with three of 12.

What it means for the Big 12 is traditional powerhouses like Oklahoma and Texas will have a more difficult time climbing back to the top of the conference rankings than upstarts Baylor and Oklahoma State, neither who play a power team.

Here’s a look at the schedules from bottom to top.

This is Oklahoma State’s easiest non-league slate since 2006, when it drew FCS Missouri State, Arkansas State, FAU and Houston. That was also the last time the Cowboys didn’t schedule a Power team out of conference.

Central Michigan is only the fifth MAC squad Oklahoma State has ever played. The Cowboys are 4-0 all-time vs. the MAC, the most recent clash coming in 1994 when they rolled into DeKalb and knocked off Northern Illinois 31-14.

Baylor hasn’t played a regular-season game against a Power team out of conference play since 2009, when it traveled to Wake Forest and edged the Demon Deacons 24-21.

Given that all three of the Bears’ non-Big 12 foes hail from Texas, they won’t play outside of their home state until Saturday, Oct. 10 when they travel to Lawrence to face Kansas.

The third of the three Big 12 members without a Power opponent out of conference, K-State hasn’t enjoyed this specific scheduling advantage since 2013 when it played FCS North Dakota State, UL Lafayette and UMass.

Combined, the Wildcats’ two FBS foes have been members of the top division of college football for a mere 29 years. That said, Louisiana Tech did play for the C-USA crown last season.

West Virginia is one of four Big 12 members that will play all three of their non-conference games vs. teams with a winning record from last season.

The only caveat is that Georgia Southern has only been an FBS member since last season and FCS Liberty has never knocked off a Power-Five team. The Mountaineers haven’t dropped a game to Maryland at home in Morgantown since 2002, winning four straight since then.

West Virginia is also the only Big 12 team without a non-league road trip in 2015.

Though TCU’s non-league schedule is far from all-world, they will travel to Minnesota to face a Golden Gopher squad that played itself within one game of the Big Ten championship last season.

Other than that, it’s two Texas-based teams, one who the Frogs have never lost to (FCS Stephen F. Austin) and the other who they’ve won three straight against (SMU).

Iowa State is the second of the four Big 12 members who will play all three of their non-league games vs. winning teams. Beyond 7-6 Iowa, the Cyclones draw 9-5 FCS Northern Iowa, a team they fell to as recently as 2013, and 9-4 Toledo.

No Big 12 team will play a set of opponents with a better record from last season than Kansas: 9-5 FCS South Dakota State, 10-3 Memphis and 8-5 Rutgers.

The road trip is the Jayhawks’ second-consecutive away game vs. a non-Big 12 Power-opponent, KU traveled to Duke last season and lost 41-3.

The meat of Oklahoma’s non-conference slate is the road trip to Tennessee, a program that improved to 7-6 last season.

The Sooners have never traveled to Knoxville, last visiting an SEC school in 2003 when they were ranked No. 1 and beat unranked Alabama 20-13 in Tuscaloosa.

Before hosting Arkansas last season, a game that ended in a 49-28 beat down, Texas Tech hadn’t played a Power-Five opponent outside of Big 12 play since 2003. That was the year the Red Raiders faced both NC State and Ole Miss on the road in the regular season, losing 49-21 to the Wolfpack and beating the Rebels 49-45.

What gives Tech’s slate the edge over Oklahoma’s is that, other than the Power-Five foe, it will play two winning teams from last season (11-5 FCS Sam Houston State and 7-6 UTEP) as opposed to the two losing squads the Sooners will face (5-7 Akron and 2-10 Tulsa).

The Red Raiders are the fourth of the four Big 12 teams that will play the entirety of their non-league schedule against winning teams.

Texas tops the list because it’s the only Big 12 school with two Power Fives out of Big 12 play in 2015. On top of that, the Longhorns will travel to South Bend to face the Irish, where they haven’t won a game since 1934.

Oklahoma loses to Tennessee in Knoxville in 2015

How does the Big12 have more ‘street cred’ than a conference that also plays 9 conference games and tops that by playing a conference championship? If anything the Big12 got rightfully dinged for their so called ‘one true champion’ where their commisioner was afraid to name either TCU or Baylor as the conference champion, electing to go with ‘co-champions’.
The Pac 12 can’t have their schools play all 11 other schools, that is an unreasonable argument.

Not in all cases is playing nine conference games better than playing eight conference games and four OOC games. I am speaking for Clemson who always plays two power house P5s practically every year. Not to mention in 2018, we play Furman, Georgia Southern, Texas A&M and South Carolina. That will be the toughest schedule in 2018. And for those who like to downgrade the SEC and ACC for play FCS schools, the Southern Conf, which most teams from the ACC and SEC play, are legit. The Southern Conference is the the best conference in the FCS.

Well said Patrick….these OOC schedules (other than Texas) are jokes, yet so many on this site have the nerve to bash the SEC for it’s OOC schedules.

No need to lump the ACC with the SEC. At least the SEC can use their conference schedule to back their weak out of conference. The ACC not so much.

Stop with the tough SEC conference schedule. At 2 and 5 in the west that excuse has been bed forever.

Does Baylor regret not having the weakest schedule? Only a few more years for Incarnate Word to show up for a beat down. Will Baylor schedule Allen High School, or would that be asking for too much competition?

I don’t understand why someone thinks an FCS team with a winning record is somehow more impressive than a mid major FBS team with a losing record. Seems myopic. It’s like saying well Memphis went 10-3 last year and Kentucky went 5-7 in the SEC – so Memphis is twice as good. Record last year – especially comparing two difference conferences or two different levels of competition (FCS vs FBS) seems like a silly way to attempt to mesaure a future schedule’s strength.

Dan Memphis was a solid team in 2014 and played UCLA and Ole Miss hard as well as on the road and if they had played Kentucky they most likely would have beat them and possibly steamed rolled them. Memphis in the SEC might not have gone 10-3 but could of been a big possibility if they were in the SEC East. Tell you this much they wouldn’t have been 5-7.

Terrible OOC scheduling as a whole…

Overall pretty weak scheduling but I will point out I think you have West Virginia too low. The FCS team they play Liberty was in the FCS playoffs last year with a FBS win to boot. Add to that the 9-3 Sun Belt Champion Georgia Southern Eagles and a 7-6 Maryland and I believe you have to put them at least in the top 4.