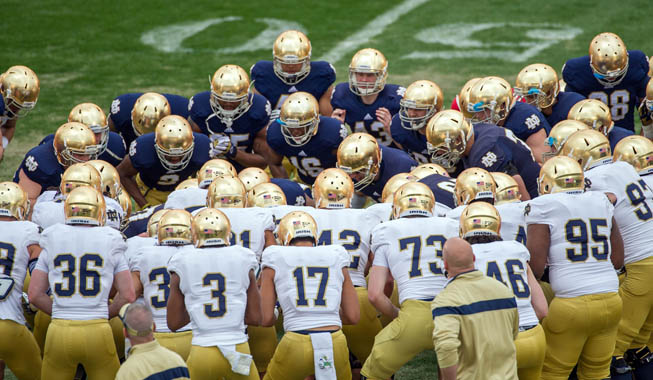 Phil Steele has published his 2014 college football strength of schedule rankings. The Notre Dame Fighting Irish have the toughest schedule in 2014 per Steele, while the Georgia Southern Eagles have the easiest.

How does Steele arrive at his preseason toughest schedule ratings? Steele combines his “9 sets of Power Ratings” with the amount of home and away games. This differs from the NCAA method which is strictly based on the opponent winning percentage from the previous year.

2. Tennessee (2013 ranking: 6th) – The Volunteers again have one of the toughest schedules in the nation, and it begins with their non-conference slate. Tennessee hosts Utah State and Arkansas State, no pushovers, and then travels to Oklahoma. In the SEC, Tennessee hosts Alabama, Florida, and Missouri and travels to Georgia, South Carolina, and Vanderbilt.

3. Arkansas (2013 ranking: 12th) – Arkansas’ 2014 schedule kicks off at Auburn, which is rare for the SEC. The Hogs later host Alabama, Georgia (at Little Rock), LSU, and Ole Miss, face Texas A&M in Arlington, and play at Missouri.

4. West Virginia (2013 ranking: 35th) – The Mountaineers open the season vs. Alabama in Atlanta and two weeks later travel to Maryland. Big 12 play opens with a visit from Oklahoma. The Sooners also host Baylor, Kansas State, and TCU and travel to Oklahoma State, Texas, and Texas Tech.

8. Utah (2013 ranking: 13th) – After opening vs. FCS  Idaho State, Utah hosts Fresno State and then plays at Michigan. In Pac-12 play, the Utes host USC, Oregon, and Arizona and travel to UCLA, Arizona State, and Stanford.

9. California (2013 ranking: 3rd) – Cal opens the 2014 season on the road at Northwestern and closes it vs. BYU. Their Pac-12 slate includes home games vs. Washington, UCLA, Oregon, and Stanford and road games at Washington State, Oregon State, and USC.

10. Texas (2013 ranking: 28th) – The Charlie Strong era kicks off with a visit from a good North Texas team followed by BYU and UCLA (at Arlington, TX). Big 12 opponents include Baylor, Oklahoma, West Virginia, and TCU at home and Kansas State, Texas Tech, and Oklahoma State on the road.

The rest of Phil Steele’s toughest schedule rankings for 2014 are listed below.

Why is Florida’s schedule ranked so high at 32 when they’ve scheduled the University of Idaho? Something stinks here

Did you look at the rest of their schedule? At Alabama, vs. LSU, vs. Georgia, at Florida State, etc.

All being equal and with each team finishing with the same record–here is what the final would look like at the end of the year for the currently ranked teams.

SOS should be an integral part of the 4 playoff team selections.

C’mon Phil, stop making people roll their eyes at you.

What idiot thinks 32 is to high for Florida!?!? Does any team in the country play FSU and BAMA on the road along with USC, LSU, Mizzu, and Georgia. I think I would have them more like top 5 SOS…

Probably should be ranked #1 due to the fact Florida plays teams ranked #1 #2 #9 #12 #13 and #24 preseason. this column is a Joke if that’s not the TOUGHEST schedule in the country. Not to mention there SEC schedule alone trumps any other teams.

If only the Polls and strength of schedules come out after 4 weeks in the season. You never know how good these teams are and whose underrated.

so are you saying georgia southern have the easiest schedule

This is awful. Ohio State at 36? Their schedule is awful.

I heard they scheduled Tennesee St. Sewing College for women but backed out of it because it would be a difficult game for them.

Not as bad as Alabama’s…hey, for two years in a row.

I love how Alabama’s strength of schedule is right between Virginia Tech and Tulane… haha priceless!

This ranking is a complete joke. Florida has the toughest. Tennessee might be a very close second. Fla plays Fla St, Georgia, and Alabama away and has South Carolina, LSU, Missouri. Tennessee plays Fla, @Georgia, Alabama, @Oklahoma, @South Carolina, Missouri. Notre Dame plays who?? Ok…Florida St. That’s it. Stanford and USC…neither looked very good last week in the USC win. Steele mentions they play 4 ACC schools in his justification? Syracuse?? UNC?? At Arizona State?? Am I missing something? Alabama plays @LSU, @Texas A&M, Florida, @Ole Miss, and Auburn. Don’t forget they played WVU which we still don’t know if they are good or just avg, but they are better than most teams in the Big10 including Ohio St. I bet they’d beat Mich St. And he has Alabama way down at #61. Stupidist ranking I’ve ever seen. I read where his SOS ranking is based on HIS power ranking. I saw that too. Second stupidist ranking I’ve ever seen.

Real SOS is actually done during the season and changes weekly. It is based not only your opponents but your opponents opponents. Any preseason SOS is nothing but speculation and guessing based on last year. Just like preseason polls are nonsense such as 2013 UF was a top 10 team preseason. 2013 UF sucked at 4-8 so having them as your OOC major conf opponent like FSU did hurt them in SOS, while preseason it looked great as they were 11-2 in 2012. Also in 2013 having Aub and Mizzou on your schedule made your SOS look not so good as they won a combined 3 games in 2012 while in the actual season of 2013 they lost 3 games combined.

Schoup—Yes, who knew UF would LOSE TEN STARTERS to season ending injury and overall LOSE FIFTEEN players to season-ending injuryies (losing TWO QBs in one season!) Even though most said UF had the toughest 2013 SOS, they started the season 5-1, Then they were overwhelmed by injuries. It’s hard to predict that. So yeah, as you say, they “sucked,” but only after they lost two QBs and nine other starting players. Only five starters started all of the games. Sure you are a Gator Hater, but give ’em a break for losing most of the best players on the team.

Tennessee at 2 with Florida at 32 is a Joke. They play the exact same teams from the East. The both play Bama in the West, plus FL has to play LSU. Is this saying Oklahoma is a tougher non-conference matchup than FSU? Give me a break. And ND at #1 because the play 4 ACC teams (Cuse being one of them) is ridiculous.

You sir are an idiot. Notre Dame nearly every year plays one of the toughest schedules. They have NEVER played an FCS team and that ACC teams has nothing to do with it, how about they Play Michigan, Stanford, USC, Florida State, Arizona State, and North Carolina.

Ooooh. Notre Dame plays Syracuse and North Carolina. That’s gotta be tough. Wait that’s lacrosse not football. Oh but they play Michigan and Arizona State….oooooh. What do those have, high school defenses?

Phil Steele is an idiot.

That’s not what your Ma said when she was under his balls.

Check these rankings against the top teams ratings at the start of the season. No wonder big time teams want puff opponents here and there. All but the Irish, who thrive on tough competition. They may not win every game, but it is always a contest right up to the last play.

Lol people really don’t know cfb to well. The irish schedule is weak as always and as always they stay away from sec teams wonder why

The NCAA method is totally flawed because it does not care who your opponents play against.

lol Auburn has 7 ranked teams on their schedule this year, to start the year, the most of any ranked team, who has the fewest….Ohio State with 1

and? FSU has a weak schedule and are ranked the #1 in the country. you do remember fsu beating auburn last year right? a good team in a weak conference is still a good team. also both auburn AND Ohio State have tougher schedules than any other team in the AP top 5.

Ohio St has a tough schedule?? Who do they play? You mean at Penn St? This is Penn St 2014, not Penn St of 1979-85. Kent St? Well other than the fact that Nick Saban was an assistant coach there, no one has mentioned them in any other discussion about football. Do they have a football team? Maybe this is an intramural team. MIch St is all they have on the schudule. VTech also, but they already lost that game. You could make an allstar team from Big 10 conference and they still couldn’t beat the top 6 teams in the SEC….Bama, LSU, Auburn, Tex A&M, Georgia, Ole Miss. They probably wouldn’t beat Arkansas, Missouri, Fla or Tennessee either.

How does Iowa State rank higher than an Oklahoma State? The have the same schedule but OSU’s best non-con game is Florida State while ISU’s is North Dekota State. Heck, OSU even has away games at BOTH Oklahoma and Baylor while Iowa has neither. What pushed ISU so high?

Notre Dame plays 5 (preseason) top 25 teams. Auburn plays 7. Just because you have one ,pretty much, unwinnable game, doesn’t necessarily mean your schedule is the toughest.

Y’all are dumb af first off Florida has a hard ass schedule they play the number 1 and 2 teams in the country FSU and Bama not to mention LSU Georgia South Carolina and etc. and notre dame how are they number 1 who the hell do they play they only play FSU and Stanford everybody else on there schedule will be lucky if they even see the Top 25 this year

Sec travels the least amount of miles out of all conf. And got more fcs comp. Than any one else…..who else can get throttled by Carolina (weak team) and stay ranked…Don’t forget L.s.u had to come back 20 something points to beat a big ten wisc lose to miss st and jump all the way up in the rankings that dont sound weird …also they always start 10 sec teams ranked every year that’s why they are ” playing so many ranked teams…so that way they can say they beat each other up…yeah the 12 team wins by three against Tenn…but they should be ranked too

Florida sucks. Not a big ten fan but they get bashed and the worst team in big ten beat Missouri. Missouri is AWEFUL. If florida don’t come back and win by 40 then the are a contender maybe in the MAC or a bottom of big ten team

Now that the end of the regular season is here, after the 12 game schedule, lets look at strength of schedule ranking for the top 4 teams :

What’s this tell all the ADs nationwide ? Have a weak schedule and you INCREASE your chances of playing in the D-1 National Championship. It does not PAY to have a tough schedule.