Perfect storms II: The least experienced CFB teams with the most difficult schedules in 2021 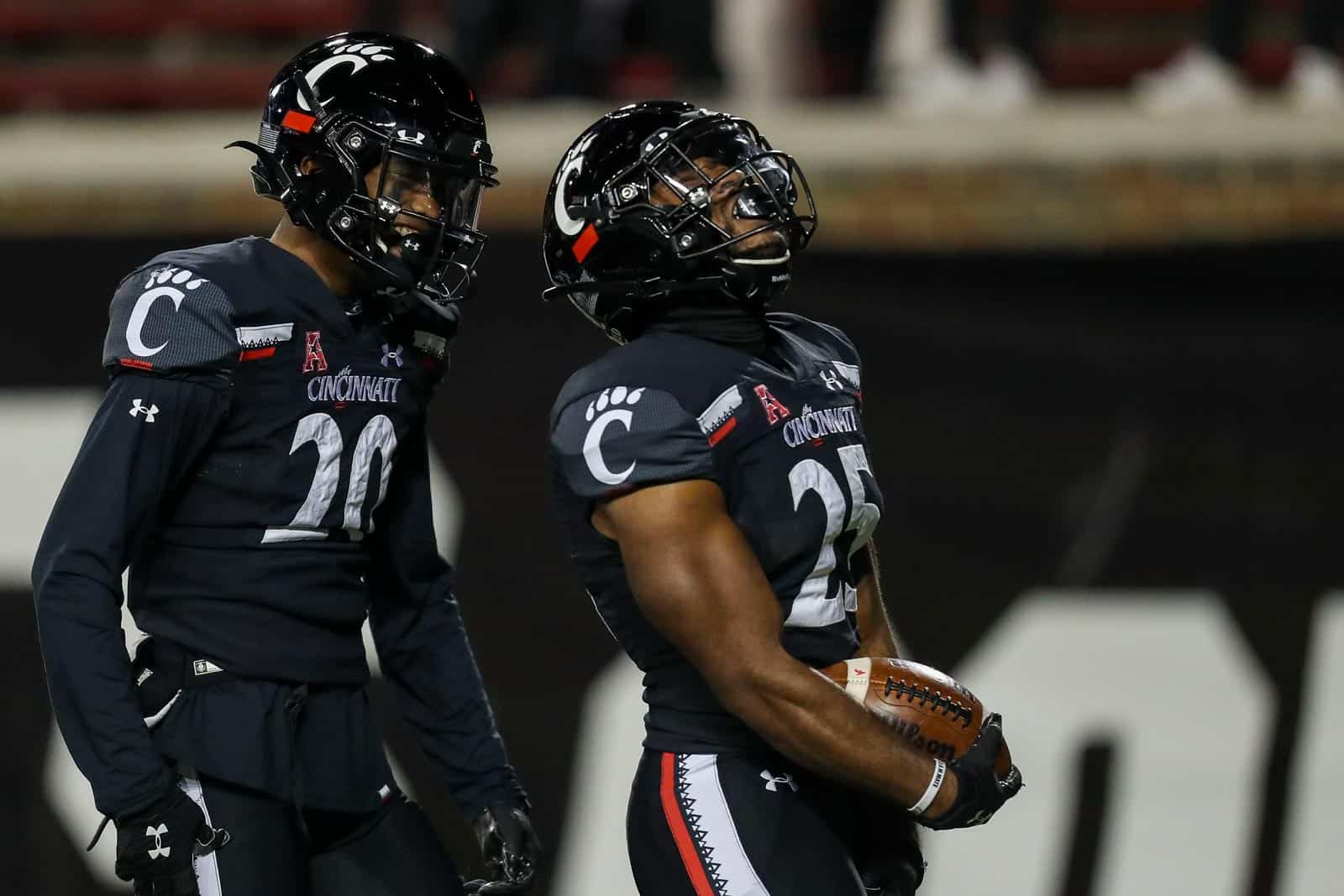 Last week we highlighted FBS teams coming into the season with tons of experience and a manageable schedule – this week we’ll look at the opposite angle.

These are the unfortunates – clubs with a young roster and a tougher slate of opponents. In the same way that we can better understand the success stories of those teams with battle-tested warriors and a clearer path, we can, perhaps, appreciate why some of the following teams aren’t ultimately as successful as we thought they might be.

Another facet of the conversation is depth. Which of the programs listed is stacked with talent to a degree that they can overcome the very concrete obstacles they are faced with?

Tune in to find out.

National Strength of Schedule Rank: No. 65

Cincinnati is 31-6 since 2018 and will be considered the most legitimate contender among Group of 5 teams this season. All accolades and expectations aside, this is a club that returns just 14 starters (the third fewest in the American) and plays a schedule that’s rated more difficult that Northwestern’s (No. 66), Vanderbilt’s (No. 68), and Clemson’s (No. 72). Among the personnel losses are the top rusher, the No. 2 receiver, two starters from the offensive line and three of the top six tacklers. From a schedule standpoint, UC gets roadies at Indiana (a Top 25 team) and Notre Dame early and then draws UCF, SMU, and Tulsa (three of the top four contenders) from a division-less AAC.

National Strength of Schedule Rank: No. 75

Georgia Southern has only dipped below the .500 mark twice since joining the FBS ranks in 2014 and posted an impressive 43-21 over its five winning seasons. Though the Eagles bring back 16 starters this year, gone is QB Shai Werts who led the team (which runs the option) in total offense. Also missing are three of the top four tacklers. Steele has the unit rated as the least experienced in the Sun Belt. In non-league play they’ll travel to Arkansas early and then draw Louisiana and Arkansas State – the top dogs in the West – in cross-division play. While they do get fellow East member Coastal Carolina at home, they’ll play Appalachian State on the road.

National Strength of Schedule Rank: No. 40

Only one Group of 5 team has a schedule ranked more difficult than South Florida’s. The Bulls open with a combination punch of games at NC State and at home vs. Florida. If that weren’t enough, they get a road trip to BYU (fresh off an 11-1 campaign) in Week 4. In AAC play, they draw the entire top half of the conference – at SMU, Tulsa, Houston, Cincinnati and at UCF. While it doesn’t suffer the same level of attrition of other teams listed, USF is ranked No. 6 in experience among the 11 AAC members. Notable losses are the starting and backup quarterbacks, the No. 2 receiver, the No. 3 and 4 rushers and two members of the secondary. Combined, it’s going to make turning the corner after last season’s 1-8 finish more difficult.

National Strength of Schedule Rank: No. 20

According to Steele, no Group of 5 member has a tougher schedule than Tulane. Throw in only six starting defenders back this season (the fewest in the American), and you get the picture. The Green Wave open at home vs. Oklahoma and then travel to Ole Miss in Week 4. Then it’s a visit from UAB, which may look like a reprieve until you remember that the Blazers have won three straight division titles and captured the C-USA championship two of the last three years. In league play Tulane gets all the contenders – Houston, SMU (away), Cincinnati, UCF (away), Tulsa, and Memphis (away). The slow climb out of the cellar Green Wave fans have enjoyed with Willie Fritz may suffer a setback this season.

National Strength of Schedule Rank: No. 42

Navy has the second-least experienced team in the American and the third-toughest schedule among Group of 5 programs. It’s a combo that may make righting the ship after last season’s 3-7 finish tough. While the Midshipmen do return nine starters to a defense that finished No. 3 in the AAC in total D last season, it brings back a paltry five starters to an offense that finished dead last in the league in scoring. Gone are four of the top five rushers and three members of the offensive line. As for the schedule, Navy gets Notre Dame, Houston and Tulsa on the road and has home games vs. UCF, Cincinnati, and SMU.

National Strength of Schedule Rank: No. 11

Texas is the least experienced team in the Big 12 and has the third-most difficult schedule. The biggest personnel losses include QB Sam Ehlinger, the No. 2 and 4 receivers, three members of the defensive front seven and two starters from the secondary. In non-conference play the Longhorns open at home vs. Louisiana (this should be a win, but the Cajuns went 10-1 last year and beat then No. 23 Iowa State) and then travel to Arkansas. In Big 12 action they get Iowa State and TCU – the other preseason contenders besides Oklahoma – on the road. First-year head coach Steve Sarkisian has his work cut out for him.

National Strength of Schedule Rank: No. 19

Alabama is so stacked with talent that it seems almost bulletproof. But the truth is (whether it impacts the bottom line or not), the Tide are the second to least experienced team in the SEC and they have a top 20 ranked schedule. The biggest hits are on offense, where they not only lose their OC but return a mere three starters. Gone are the starting QB, the top rusher, three of the top four receivers and three members of the offensive line. Alabama opens in Atlanta against a stacked Miami Fla. team that ought to be in the Top 20. In cross-division action, they draw a roadie at Florida to go along with the standing date with Tennessee. While they get LSU at home, Texas A&M and Auburn are both away games.

National Strength of Schedule Rank: No. 23

Only two teams in the entire FBS are less experienced coming into 2021 than Notre Dame which returns a mere nine starters. And, as opposed to small drips of attrition, these are gaping holes to the tune of nine guys gone in the NFL draft. Though only six are back on defense, the real situation is on offense where only three starters return. Gone are the starting QB, two of the top three receivers and all but one starter from the offensive line. The biggest tests on the schedule are visits from Cincinnati, USC and North Carolina and roadies at Florida State (which it gets in the opener as a possible upset alert if there are any hiccups), Virginia Tech and Stanford. Then there’s the Week 4 matchup with Wisconsin in Chicago. With less depth than Alabama, it will be interesting to see how quickly the Irish can fill the experience gaps.

National Strength of Schedule Rank: No. 12

After posting a 2-4 record last season, no head coach in the FBS may be in a tighter spot than Jim Harbaugh. And while expectations are high, and some are predicting a rebound, the truth is Michigan is ranked No. 12 out of the 14 members of the Big Ten in experience and has the third-toughest schedule in the league. Most concerning is the defense, where the Wolverines lose three of the front-seven from a unit that finished last year ranked No. 95 nationally in scoring. In non-league play, they get Washington (a potential preseason Top 10 team) at home in Week 2 and then draw a visit from Northwestern and roadies at Wisconsin and at Nebraska in cross-division action. Though they get Ohio State at home, Michigan State and Penn State are road games.

National Strength of Schedule Rank: No. 8

Stanford has the unfortunate honor of being the least experienced team in the Pac-12 which will also play the second most-difficult schedule. It’s a lot for a program that is trying to climb back to the double-digit seasons it enjoyed regularly from 2011-16. The Cardinal return a mere 14 starters from its 4-2 finish last year. Gone are the starting QB, the top receiver, two members of the offensive line and two of the top three tacklers. In non-conference play, it opens with Kansas State in Arlington, travels to Vandy in Week 3 and then finishes with a visit from Notre Dame. It makes them the only team in the FBS set to play all 12 of its regular-season games vs. Power 5 clubs. From across the Pac-12 in the South, it draws all three of the top contenders – at USC, at Arizona State and vs. Utah. The only good news is that the Ducks and Huskies are home dates.

My USF Bulls are better this season mainly due to having a spring with a head coach who’s now in his second season there, but I’m not sure the improvement will show up in the win column this season due to their brutal schedule. They miss Memphis, but also Navy. USF could be favored in only a couple of its games, but could pull off an upset or two in American play.