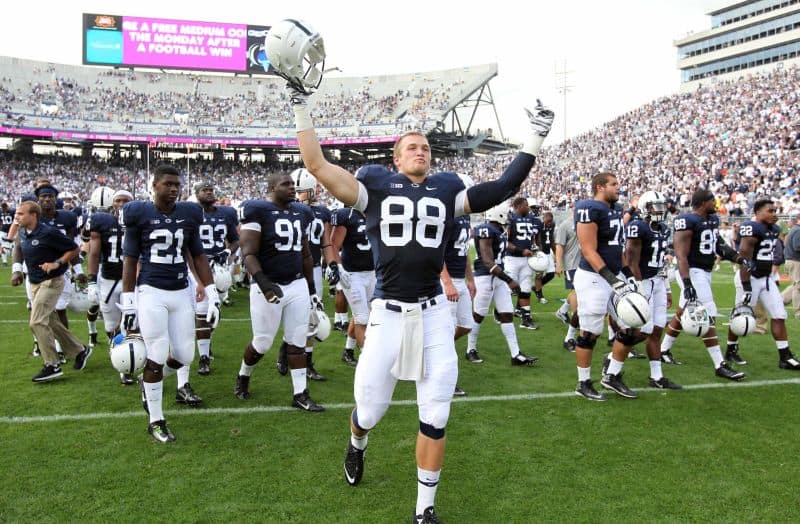 Penn State will now be immediately bowl-eligible and have all scholarships available beginning next year. (Matthew O'Haren-USA TODAY Sports)

Penn State received some good news on Monday, as the NCAA announced a decision that immediately made them eligible to compete in the Big Ten title game and a bowl game.

The NCAA issued an official release on the matter, saying, “Due to Penn State University’s significant progress toward ensuring its athletics department functions with integrity, the NCAA Executive Committee on Monday eliminated the school’s postseason ban, effective immediately, and will return the full complement of football scholarships in 2015-16.”

The release also cited a report from George Mitchell (famous for the Mitchell Report submitted to Major League Baseball) that outlined the progress made by the university in its internal monitoring and compliance programs.  The guidelines set as part of the sanctions against Penn State are thoroughly outlined within the report.

The Nittany Lions had already enjoyed increased scholarship availability for the season, as ten additional scholarships were granted a year ago for the 2014-15 slate.

The immediate eligibility for postseason play will provide a large benefit for Penn State.  The Nittany Lions currently share the lead in the Big Ten East with Maryland and Rutgers, as all three schools own a 2-0 overall record.  Though no conference games have been played, Penn State owns victories over UCF and Akron.