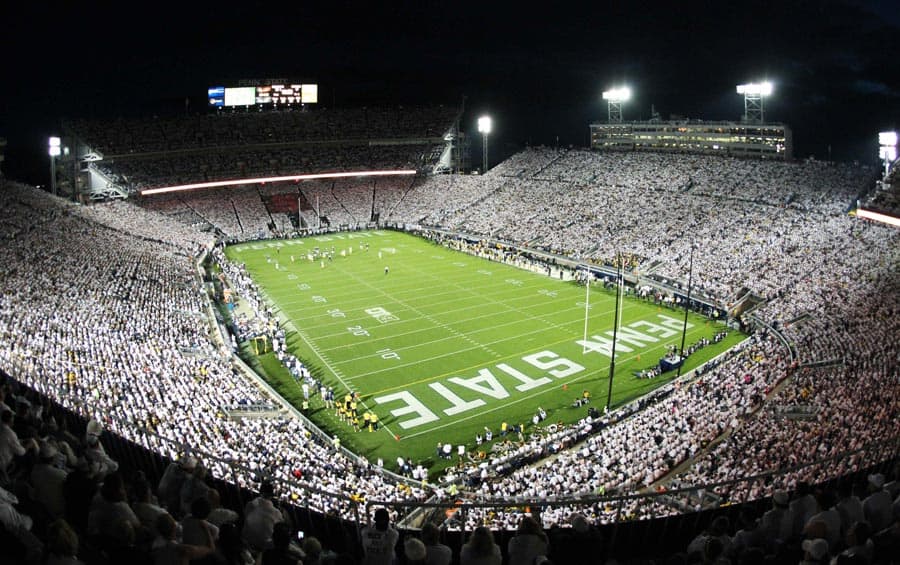 The Penn State Nittany Lions have added the Idaho Vandals to their 2019 football schedule, the school announced Friday.

Penn State will host Idaho at Beaver Stadium in University Park on August 31, 2019. The game will be the first-ever meeting between the two on the gridiron.

The addition of Idaho gives Penn State their second of three non-conference games for the 2019 season. The Nittany Lions are also scheduled to host in-state rival Pittsburgh on Sept. 14.

Idaho, a member of the Sun Belt Conference, now has three non-conference games scheduled for 2019. The Vandals are also slated to travel to Wyoming on Sept. 14 and Old Dominion on a date to be announced.

With two trips to the East Coast in 2019, Idaho will certainly rack up the frequent flier miles. The two trips to Penn State and ODO will be approximately 10,284 miles round-trip.

What’s the guarantee to Idaho for this game? Hopefully it covers the transportation logistics. ;-)

Idaho needs to join the BigSky for all sports.

Hopefully it will cover all of the medical expenses for poor Idaho. They need to schedule at least 2 body bag games a year now just to survive financially. they are historically one of the most pitiful teams in NCAA football history. I challenge anyone out there to find a school that has done less in their history.

……..Rutgers. Well over 100 years of futility. Cubs fans look at the and laugh

Really, now Penn State!! I’ll really be up for that snoozer! Give these Idaho kids a chance and ask nicely to go back to the Big Sky. What are you wizards of insanity smoking up there??? The God almighty dollar has really turned this program into a money grubbing whore.

Running tabs on what happens first… Petrino blows up, or the Big Sky calls. Can’t fault Idaho for holding out hope that the XII gets off the can and invites a couple MW schools such as Colorado State and New Mexico, opening up space for Idaho and NMSU to fill in. They’re just waiting for the XII dominoes to fall. In 2020?

Idaho does not have a large enough fan base that the Mountain West would ever be interested in them. They cannot fill a 15,500 airport hangar of a stadium for football and average less than 1,400 for home games in mens basketball. They have no attraction to anyone. Montana would be a better fit but they know better than to try a compete at a level where they would not be comfortable. Just think Montana gets 25,000 plus for home football games and Idaho playing at a higher division gets less than half of that.

As a Penn State Alum and Fan, I am not happy with the scheduling of Idaho. Since it is an odd year, Penn State will look to host 3 non-conference games and it can be challenging to bring folks in; but I feel they could do better than a game against Idaho.

Every power 5 conference schedules cupcakes. Don’t blame the teams, blame the ncaa. Penn state just like other big time programs will notake give up a home game, too much revenue being generated in state college. Plus small Schools like Idaho will take home more money by going to Penn state then they would hosting a game vs some other small school. Ncaa needs to create a rule where power 5 conferences schedule each other for non conference games, till then my Alma mater will schedule teams that are willing to travel for a road game. We are!!!

i am just a 9 year 0ld so i probaly didn’t understand anything that you jusyt said but i think i agree with you on this . plus peenstate is awesome !!! plus only two loses this season it’s awesome !!!!!, wer’re going to indi !!!!!!!!!

FYI everybody who could be reading this comment right now , the comment that i had just wrote is a reply to RYPROj

@RyProj, I hear you. I had a post on the 2018 comments, and yes you get it – that finances dictate 3 home OOC games in those years. I wish they could do better than Idaho, but what if they couldnt? It’s better than Akron, Kent, Toledo again and again. Franklin also told Barbour that wins for the program were most important. He knows if he can win the B10 with no OOC blemishes it will guarantee a playoff spot. He is probably right, a B10 champ with weaker OOC will not be denied. Baylor and TCU were victim not to OOC schedule, but no Conference Championship game, and their commissioner bungling the whole situation. He destroyed Baylor’s chances with his press conferences not backing them.

As a season ticket holder, I hate having to pay for, and drive 4 hours each way in traffic to see an Idaho, (insert any MAC), SD State, etc. But that is our reality.

Bonus question: when do we get that return visit from Virginia we were due in 2013?

go peenstate . okay iam peenstate all the way but seriously we are not rivals with PITT!!!!!!!!!!!!!!!
so what we lost to them this year but if we got a redo of that game we would’ve beaten their a**’s! plus PITT and Michigan wher our only loses in the whole entire season this year !!!!!!! so think think again when it comes to peenstate VS PITT .