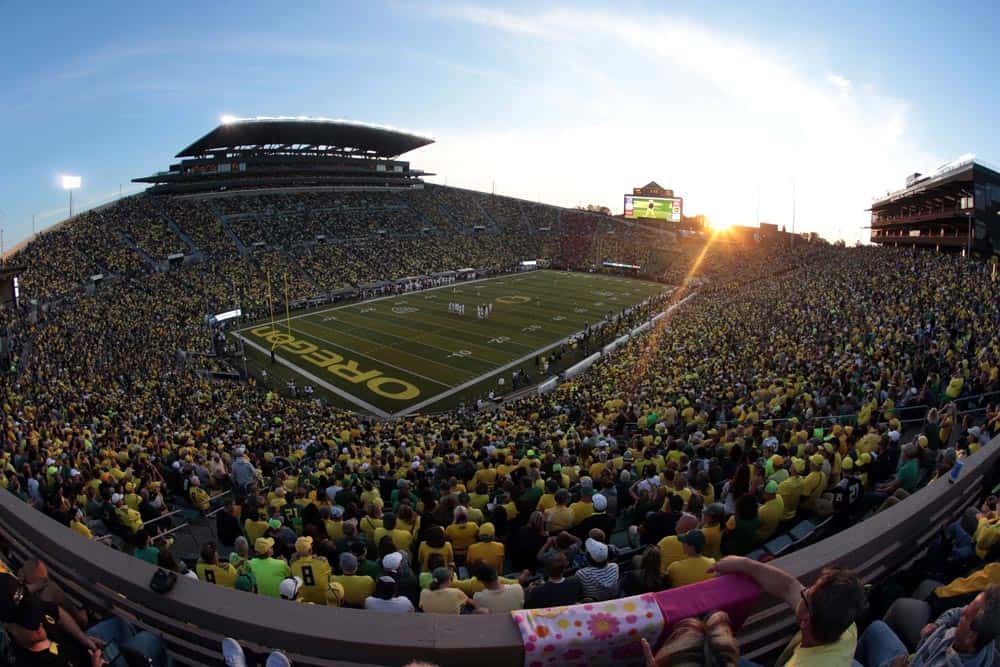 The Oregon Ducks and the Texas Tech Red Raiders have scheduled a home-and-home football series for 2023 and 2024, both schools announced on Monday.

In the first game of the series, Oregon will travel to face Texas Tech at Jones AT&T Stadium in Lubbock on Sept. 9, 2023. The Ducks will then host the Red Raiders at Autzen Stadium in Eugene on Sept. 7, 2024.

Oregon now has two games scheduled for both the 2023 and 2024 seasons. In addition to playing Texas Tech, the Ducks are scheduled to host Hawaii in 2023 and travel to Honolulu in 2024.

“We are excited to add another Power Five school to our home schedule,” UO athletic director Rob Mullens said. “Consistent with our scheduling philosophy, we want to continue to attract the best nonconference opponents willing to play at Autzen Stadium.”

The bigger question is what are the Ducks going to do about 2018, after Texas A&M pulled a fast one and cancelled the home-and-home with Oregon, leaving the Ducks in a scheduling bind. This follows Kansas St and Georgia also cancelling series with the Ducks. Good to see Michigan St, Ohio St, Nebraska and Virginia are not afraid of visiting Autzen.

I’m sure Central Michigan would be interested, they already travel to OK State and MSU and have a home game against Kansas. $$$

But in reality Western Michigan should jump on it, they only have 1 OOC game for 2018 announced.

Shep are you trolling or just didn’t look that Oregon already is paying Bowling Green for a guarantee game in 2018?

The Ducks need a P5 replacement for 2018. But the Ducks could go with scheduling BYU or a MWC program needing 2018 games (UCF, San Jose St, Utah St, UNLV, New Mexico) but most are in need of home games. I suspect the Ducks will end up playing Utah State Aggies, if a series with Arkansas cannot be agreed upon.

I’ve lost all respect for the Texas A&M Aggies program for putting Oregon in such a scheduling bind and impacting Oregon’s 2018 strength of schedule.

Auburn, Arkansas, Ol Miss, Vanderbilt and Texas Tech still need a Power 5 OOC opponent in 2018. So maybe the Razorbacks, Rebels or Commodores will be playing the Ducks in 2018? Ducks and Razorbacks both need P5 OOC opponents in 2018 & 2022.

I understand there are people working on trying to get an Auburn v. Oregon rematch for 2018. As an Auburn alum, I’d be glad to see that, even if it means we need to go to Autzen, and have Oregon visit Jordan Hare down the road.

Texas A&M cancelled the 2018 & 2019 games with Oregon. The Ducks have already filled the vacated 2019 slot with a so-called ‘neutral’ game against Auburn in Arlington. The Ducks played LSU in Arlington several years back. (Too bad these programs decline to play a game at Autzen).

Oregon does not want to schedule neutral (road) games in back to back seasons. Rather wants to schedule a home-and home series with a Power 5 program, or BYU. However the Cougars already have six road games scheduled for 2018 and are already scheduled to come to Autzen in 2022 (a game which I suspect will be cancelled when BYU is chosen to join the B12).

So hoping for Oregon-Arkansas home-and-home for 2018 & 2023. If not maybe a series against Central Florida, which would match coach Helfrich against ex-Duck OC Scott Frost. But I don’t think the Ducks or Helfrich want to do that so soon in 2018.

The Ducks need to start holding these higher profile programs, who sign home-and-home agreements, to the cancellation clauses, rather then letting them off the hook for free as Oregon has been doing. Otherwise don’t waste the time scheduling games with SEC programs who refuse to honor their word. Rather Oregon should focus on scheduling B1G and B12 programs who don’t have a history of cancelling. Besides an Oregon-Arkansas series, hoping for future series with Oklahoma, Okla St, Wisconsin, and rematch with TCU.

I luv this comment you made,
“Otherwise don’t waste the time scheduling games with SEC programs who refuse to honor their word. Rather Oregon should focus on scheduling B1G and B12 programs who don’t have a history of cancelling.”
Meanwhile Michigan just cancelled & bought out the series with Arkansas, that is why the Hogz have an opening for 2018, its just not the SEC that cancels games, you see.
K-State also cancelled the series with Oregon, so now you have a BIG & Big-12 team that did not honor their words. All teams & conferences do it, not just the SEC.

Maybe the Ducks are awaiting the result of the Cal game in Australia, and are contemplating scheduling a 2018 game down under? But that would mean “neutral site’ games two seasons in a row, impacting Oregon’s home schedule.

I was wondering about an overseas game. I know the conference voiced some interest in China. Maybe a game there in 2018.

Sooners and Horns, you owe the Ducks a game or two.

Texas A&M Aggie fans, how are those ‘ladies’ clinics faring?

Sooners had quite a memorable game in Autumn. Doubt they’d want to return. At least not with Pac12 refs.

Wasn’t saying all SEC teams don’t honor their contracts, or that all B12 and B1G teams do. I was saying some of the larger programs from those conferences often break agreements and I was expressing appreciation to those who don’t do that very often. The point is Oregon allowed Texas A&M, Kansas St, and Georgia to cancel series at the last moment AND did not enforce the cancellation guarantee. So Oregon ends up scrambling to fill their schedule, resulting in a negative effect on the strength of schedule and to the detriment of of the home schedule negatively impacting the season ticket buyer experience. That is why Oregon ended up scheduling both LSU and Auburn in Arlington, which would not have happened if the Ducks would have enforced the cancellation guarantee as they would have the funds to entice another P5 major to visit Autzen.

So I say to Oregon, just lower the risk of these scheduling fiascos and instead focus scheduling the middle/lower tier P5 programs and enforce the cancellation clause. And conversely Oregon should honor their commitments and not put other programs at risk. Oregon is visiting Wyoming soon where the Ducks could just have well cancelled on the Cowboys. I respect that.

Mason, I here ya on the Oklahoma game. After further review you are probably right. All conferences have homie officiating. However I recall Oregon in the 70’s visiting Oklahoma for a couple games (not home and homes), losing each time by 50 or 60 points. Talk about ouch! But it is a new decade now ;-).

Hey Razorbacks. Here’s a gift for you.

Oregon needs a P5 opponent for 2018 & 2022. Then schedule a home-and-home with Minnesota or Kansas in 2019 & 2020 or a neutral site game with Kansas in Kansas City in20 19. And neutral site game in 2020 with Oklahoma, Nebraska, North Carolina, Virginia or Northwestern. There are choices available so you don’t need to ask the SEC for a waiver.

And what happened to the idea for an Ark-Baylor neutral site game in Houston for 2020. Instead Baylor scheduled down to play Rice in Houston, and thus will not have a P5 OOC game in 2020. Baylor reverting back to their old scheduling ways.