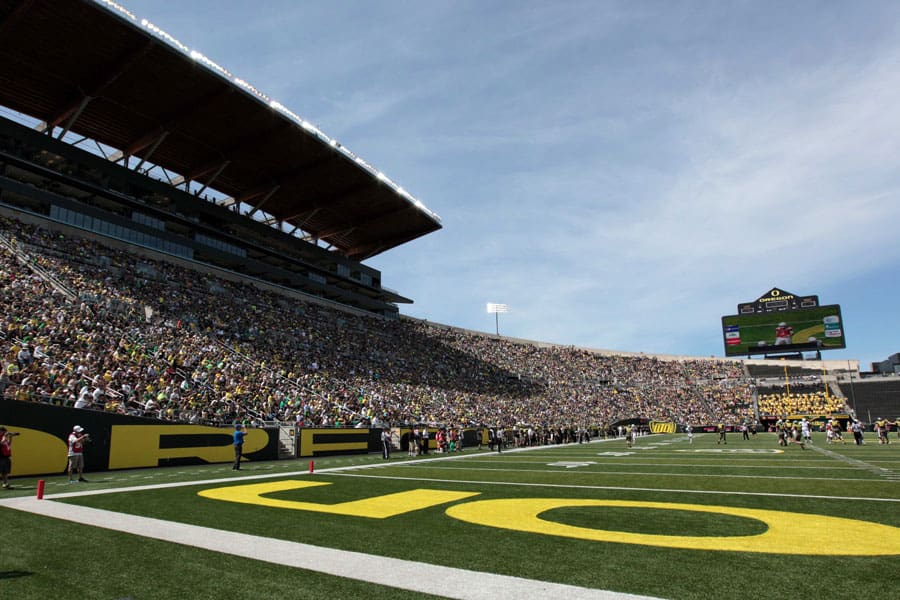 The Oregon Ducks and the Hawaii Rainbow Warriors have scheduled a three-game football series for 2020, 2023 and 2024, the Star-Advertiser has reported.

Oregon will host Hawaii at Autzen Stadium in Eugene in 2020 and 2023. The Ducks will then travel to face the Rainbow Warriors at Aloha Stadium in Honolulu in 2024 to complete the series.

“With so many players on our roster coming from Hawaii, it makes a lot of sense for us,” Oregon athletic director Rob Mullens said.

Heisman Trophy winner Marcus Mariota was one of six Oregon Ducks last season that hailed from the state of Hawaii.

Hawaii is the second announced non-conference opponent for the Oregon Ducks for 2020 and beyond. Oregon begins a home-and-home series with Ohio State at home in 2020 and then travels to Columbus in 2021.

The Rainbow Warriors now have two announced non-conference games for 2020. Hawaii is currently scheduled to open the 2020 season at Arizona.

Oregon is the first announced opponents for Hawaii for both the 2023 and 2024 seasons.

or they might be a lot worse. Even worse, by then Hawaii may have already dropped football due to the fact that they losing money every year giving Oregon the opportunity to schedule another cupcake.

And how about Alabama’s daunting OOC schedule with Mid Tenn, ULM, and Charleston Southern. Daunting!

Both avoid playing an OOC game on the home field of another.

Oregon has scheduled as aggressively as anyone in the country. Its not like Hawaii will be the marquee non-conference game on the schedule in any of these seasons.

True, they hosr tOSU the same year this series opens. The Ducks typically scedule 1 P5, 1 MW, and 1 FCS or a team from a lesser G5 conference. Nothing in this announcement will prevent that from happening in the future.

Not this year for the Ducks. Michigan State in the road and then 2 FCS teams in Eastern Washington and Georgia State @ home.

Dave, next year they play 2 P5 OCC, granted UVa is worse than average, but they’re still considered P5 and look like they’re improving.

It is too bad that Washington doesn’t follow this policy. They say that they do an A-B-C format like Oregon except in 2016 they have Rutgers, Idaho and Portland State-who is the B Team?
2018 it is North Dakota, Nevada and BYU-is BYU now an A quality team? 2019-BYU, Eastern Washington and Hawaii-Is Hawaii really a B team?

it is still a major dumb down for a program that is trying to rebuild itself. Don James would be rolling over in his grave. 2007 OOC schedule-Boise State, Syracuse, Ohio State. 2016-Rutgers, Idaho, Portland State. 2008 OOC schedule-BYU, Notre Dame, Oklahoma.
2017-Rutgers, Montana. The Huskies are the newest member of the Big Sky?

Indeed, pretty dumbed down in the years ahead. Rutgers isn’t much of a Power 5 team.

That is true. If Chris Petersen performs true to form like the last few Boise St. coaches that moved up to the next level, then this series with Rutgers will have very little meaning on the football landscape.

Anyone going to schedule Eastern Washington?