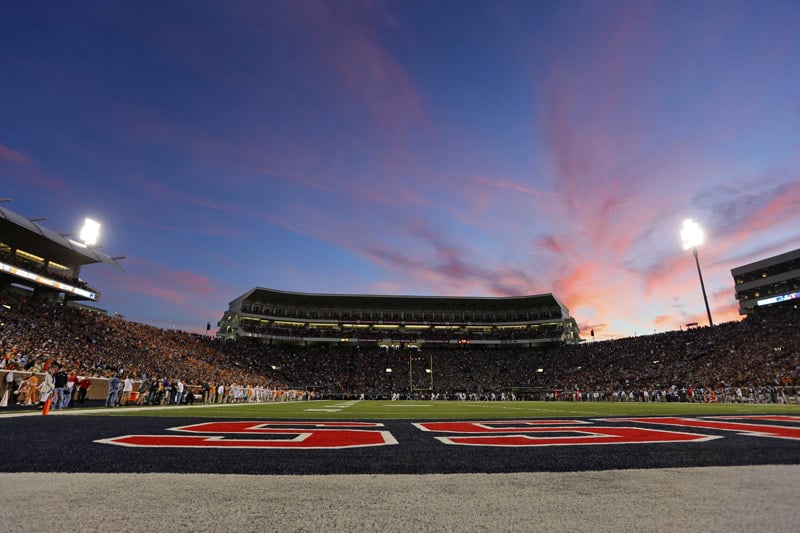 The Ole Miss Rebels and the Wake Forest Demon Deacons have scheduled a home-and-home football series for 2024 and 2025.

In the first game of the series, Ole Miss will travel to take on Wake Forest at BB&T Field in Winston-Salem, NC on Sept. 14, 2024. The Rebels will then host the second and final game at Vaught-Hemingway Stadium in Oxford on Sept. 13, 2025.

The series will satisfy the “strength of schedule” mandate for both Ole Miss and Wake Forest in 2024 and 2025. The mandate, which begins in the SEC in 2016 and in the ACC in 2017, calls for each conference member to play at least one non-conference game against another team from a power five conference.

Ole Miss is also slated to face Georgia Tech in 2022-23, but currently has no announced power five opponents from 2016 through 2021.

Seriously Ole Miss? Well this is another OOC team Art Briles and the baylor bears would never ever schedule.

Baylor and Wake Forest played in 2008 and 2009….Art Briles was the head coach

@schoup
agreed, I was just letting Tully know Wake and Baylor have played. He said Baylor would “never ever schedule” Wake Forest.

Baylor and Missi. Two programs which deserve to be disciplined by the playoff committee for their consistent ultra weak non-conference scheduling.

I think the match-up is a step in the right direction for Ol’ Miss and the SEC. It’s a home-n-home match-up against a team from a Power 5 Conference. Nothing wrong with it. Perhaps some other SEC teams could take a lesson.

This certainly meets the “minimum requirements.” Ole Miss fans will certainly be unhappy with the quality of non league opponents, but are coming to terms with the fact, that by and large the SEC seeks the weakest possible non league schedule to enhance the win/loss percentage of each team.

Take a page from Oregon. From 2014-2021, Oregon has, in addition to 9 league games (take that SEC)your fans would rather see another SEC opponent than 3 cupcakes like ULM, UT/Martin, The Citadel, Furman Southern Miss. Western Kentucky,etc,etc,etc. Oregon hastrue home & homes with, Michigan St, Nebraska, Texas A & M and Ohio State. Georgia bailed out on a home & home. Tennessee , at least had the guts to honor. their agreement and come to Eugene and play.

Outside of the SEC, Baylor is the biggest joke of them all. Incarnate Word (really).

and today Texas A&M has also bailed out…

In fairness, most SEC teams are good about scheduling at least one P5 team each year. FL, GA, SC, and KY have their in-state ACC rivals. Tennessee, Auburn, Alabama, and LSU schedule mostly the upper half of the P5 for non-conference. South Carolina and especially Georgia deserve tons of credit for scheduling two challenging teams in non-conference in recent years. SC has played UNC and NC State (not to mention ECU), and Georgia has played Clemson, Ok. State, and Az. State in the past few years.

For those schools trying to meet the minimum requirement in the ACC and SEC, I expect a lot of phone calls to be made to the likes of Washington State, Oregon State, Colorado, Iowa State, Kansas, Purdue, Indiana, Northwestern, Rutgers, Maryland, and Minnesota. This is also why strange ACC-SEC matchups LSU-Syracuse have been made when much more sensible games like LSU vs. Texas or Oklahoma or Oklahoma State.