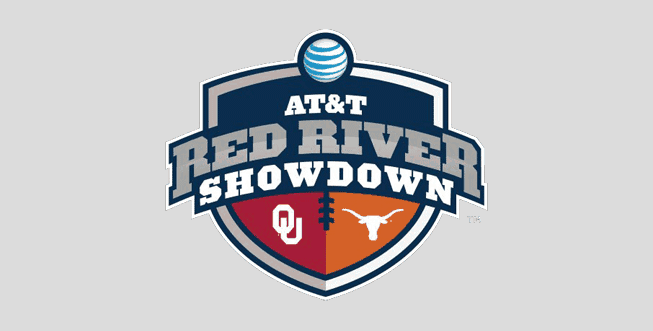 The Oklahoma vs. Texas football game has been updated with a corporate name, AT&T Red River Showdown, both schools announced this afternoon.

The series had been known as the Red River Rivalry since the 2005 game, which was the 100th meeting between the two schools. Prior to that, the Texas-Oklahoma series was referred to as the “Red River Shootout.” That name is still used by fans and writers today.

Texas and Oklahoma first met in Austin in 1900 and have played annually at Cotton Bowl Stadium in Dallas since 1929. Texas leads the overall series 60-43-5 and stopped a three-game losing streak last season by upsetting the Sooners 36-20.

“The Oklahoma-Texas game played annually at the Cotton Bowl is one of the grandest traditions in all of college football,” said Joe Castiglione, University of Oklahoma Vice President for Intercollegiate Athletics Programs and Director of Athletics. “We will continue striving to make this contest a truly memorable experience for the student-athletes and fans of both the University of Oklahoma and The University of Texas amidst the unique and colorful atmosphere of the State Fair of Texas.”

“We’re excited to continue connecting college football fans to this iconic game for years to come,” said Mark Wright, Vice President of Media Services & Sponsorships, AT&T. “Texas and Oklahoma fans are passionate about their teams and this game in particular. We love being able to help fans enjoy the matchup as part of such a long-standing football tradition.”

This is the second sponsorship by AT&T in the Dallas area in the past year. Last July, the Dallas Cowboys and AT&T reached a multi-million dollar deal for naming rights, which changed Cowboys Stadium to AT&T Stadium.

If ATT wants me to call it that name, they can send me a check.

They went with AT&T? Funny, I would have expected them to have brand unity and go with “at&t” instead of “AT&T”. Showdown is not bad compared to the bland Rivalry, although Red River Rivalry was alliterative. (So was Red River Revelry, which usually follows for the winner!)

Either team would win the championship if they reintroduced the sudden surge offered by both the split T and the wishbone formations in their red zone attack. Both teams have lost championships by leaving the ball on the one yard line.