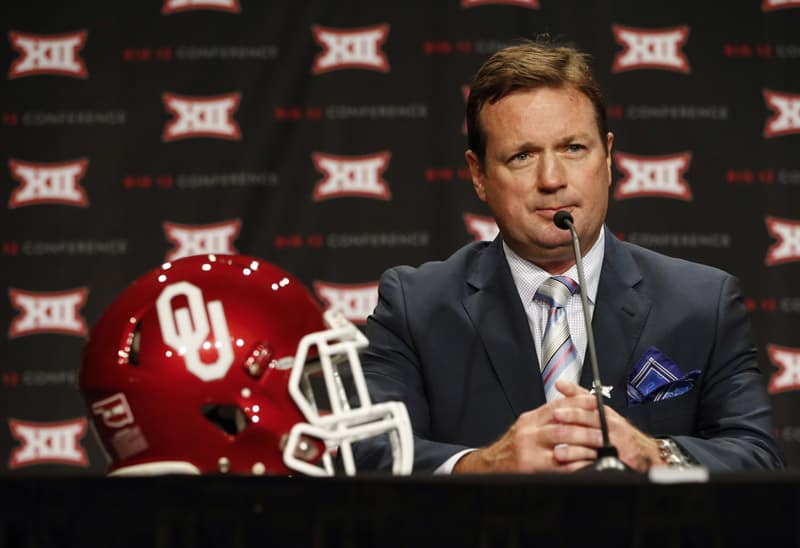 The Oklahoma Sooners and the Texas A&M Aggies have met on the gridiron 31 times overall, including every season from 1996 through 2011.

But when Texas A&M left the Big 12 for the SEC, their annual contest ended. The two did meet up in the 2013 Cotton Bowl, where A&M’s Johnny Manziel torched the Sooner defense with 516 total yards and four touchdowns en route to a 41-13 blowout win.

Since Oklahoma and Texas A&M are no longer in the same conference, they could be competing for a spot in the College Football Playoff in the near future.

With the playoff in mind, coaches have been talking scheduling more than usual, either bragging about their own tough slate or pointing out weaker schedules of others.

This week during the ESPN Car Wash, Oklahoma head coach Bob Stoops took the opportunity to take a jab at Texas A&M’s non-conference schedule this season, which includes Lamar, Rice, SMU and ULM.

But according to the Sagarin ratings, Oklahoma’s 2014 non-conference schedule is only slightly better. The Sooners host Louisiana Tech and Tennessee and travel to Tulsa. The average 2013 Sagarin rating of those three? 119.3.

Texas A&M does have a very difficult SEC slate in 2014. The Aggies open at South Carolina and later travel to both Alabama and Auburn. That’s three possible Top 10 opponents on the road. A&M also hosts Ole Miss, Missouri, and LSU.

As far as the comparison between Oklahoma and Texas A&M’s full schedule, Phil Steele ranks the Aggies schedule 12th in the country and the Sooners schedule 49th.

“Coach Stoops has the right to say whatever he wants,” said Sumlin. “But if he’d like to play again we’d take him up on that.”

Hopefully Bob Stoops accepts Sumlin’s offer. The fans would love to see that, as well as Texas A&M’s other dormant rivalry game — Texas.

A&M needs to shut up, they have played cream puff city historically out of conference while OU has been one of the programs that has scheduled series with any top program willing to play home and home. Btw, it’s a joke to say A&M OOC in 2014 is almost equivalent to OU. A&m plays 3 mid majors and a FCS school and OU is playing 2 mid majors and a major conf team TN,

Don’t you know your SEC rhetoric?? The bottom half of the SEC only gets to count as a tough game when fellow SEC teams are using their tough conference schedule to justify the cakewalk non-conference schedules. Other schools don’t get that courtesy.

All you OU fans sound like a bunch of whining b*&^*&s. Shut up and go suck on TU”s nutz.

Roldawg, all you SEC fans are the same. You root for a conference and not a team. Have a nice ride on the bandwagon.

We all know why Oklahoma and Texas decided to cross the road to the other side and not accept the invite to the SEC. Cowards….their programs are cowardly and full of inbreds. If you’re scared, SAY YOU’RE SCARED!! You spout off about your individual program, but not your conference. The SEC can spout off about both their programs and their conference. The whores of Texass & lOUser Schooner are nothing but a couple of cow turds on the manure plains.

I would love to see one of the 4 teams that Stoops ragged upset them someday in Norman. Screw Stoops, OU and the BIG 12

Here’s the deal. A&M is in the SEC – so if you factor in the games they have NO CONTROL over scheduling – their schedule looks better than OU’s (by virtue of playing Alabama, Auburn, LSU every year). But, if you factor in games that they had control over scheduling – OU’s is much stronger. OU schedules big time opponents many, many years in advance of the actual game occurring. Tennessee was in much better shape years ago. OU will go home and home with anyone in the country. They have Ohio State, Nebraska, LSU, Michigan, and UCLA in the coming seasons. A&M has stepped theirs up too (Arizona State & Oregon). But to say the non-conf schedules between the two teams this season are similar is completely wrong and asinine. Tulsa has a strong mid major program, just had a bad season last year. Tennessee is much, much more talented than anything aTm has on their non-conf schedule.

Here’s another salient point. OU only plays 6 home games every, single season. They most always play 2 home non-conf games and 1 away non-conf game. By having the 9 game conf schedule – They have 4 home games, 4 road games and a neutral site game against Texas. aTm (as well as any MANY other SEC teams) has 7 or 8 true home games every year. Much less likely to lose home games than away games.

Oklahoma doesn’t duck, no question – Tennessee simply sucks right now, not Stoops fault; but future schedules against Ohio State, UCLA, Nebraska, and LSU show a desire to play heavy hitters. No question the past A&M has ducked, and their 2014 schedule is part of the legacy effect of that. But even before the SEC 9th P5 kicks in, Sumlin scheduled Arizona State in 2015 (in Houston). And the “cupcakes” he chooses to play after that are UCLA and Oregon in home and home schedules for 2016 through 2019. Clearly Sumlin doesn’t believe in ducking.

When A&M left for the SEC, they also had to add a 4th conference game at the last minute for the next few seasons. There aren’t many power five schools that can or will line up a game on that short of notice.

A&M’s entire non-conference schedule got scrapped when they made the move to the SEC. Everyone knew it would take 3-4 seasons to get quality opponents back. This is the last season for that, with solid Pac 12 teams on the horizon – Arizona State, UCLA, and Oregon. OU has no such excuses for 2014 but they get Tennessee (eh) and Ohio State in 2015 (wow). UCLA and Nebraska coming down the road. Stoops just being Stoopid..

He was asked a question about out of conference schedules and answered it. He didn’t put AnM on blast but simply used their very weak OOC schedule as an example. #BoomerSooner

And A&M is probably going to go 6-6 with that tough schedule. So win and then talk. Instead A&M fans will make excuses and give their ramblings about what they IMAGINE OU would do in the $EC. Let’s not forget A&M is getting significantly better recruiting classes then OU since moving to the $EC. If OU was in the $EC combined with their tradition they’d get a top 5 class every year – so consider OU having even better players than it does alresdy when you give your imaginings of how they’d fare in the $EC.

If it wasn’t for all the great players from Texas, OU would be lucky to beat Rice every year….

to the 1 cracker from Georgia. go suck on alabamas nuts honey boy!!!

texas a and m left the big 12, they couldn’t win a championship in big 12.

yeah Alabama got grits pounced up their ass in the sugar bowl. sec is sweeeeeeeettt!

yeah, all the great players from texas????, hey dipshit, maybe the so called players from texas were originally from Oklahoma, they couldn’t stand the stench of manure and urine in the state and their fine people! they got the hell outta there.