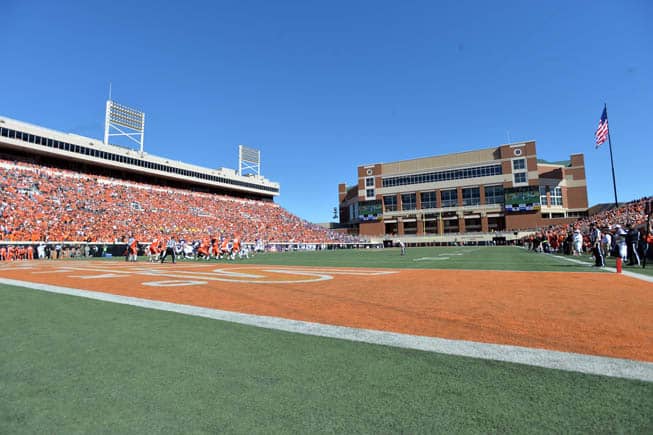 The Oklahoma State Cowboys and the Pittsburgh Panthers have scheduled a home-and-home football series for 2016 and 2017, OSU announced Wednesday evening.

Oklahoma State will host the first game of the series at Boone Pickens Stadium in Stillwater on Sept. 17, 2016. In the second and final game, the Cowboys will travel to face the Panthers at Heinz Field in Pittsburgh on Sept. 16, 2017.

The 2016 game will be the first ever meeting between the two schools unless they meet in a bowl or playoff game beforehand.

Oklahoma State already had a full non-conference schedule in 2016, so obviously one of their previously contracted games has been postponed or canceled. They were set to play at South Alabama and host Rice and Tulsa.

The addition of Oklahoma State gives the Pitt Panthers three non-conference games in 2016 and two in 2017. Pitt also hosts Penn State and Villanova in 2016 and plays at Penn State in 2017.

I love that they’re willing to travel to CMU in a 2-for-1 series as opposed to just doing a 1-off, I’ve got respect for these Cowboys. Not the pro ones.

I also appreciate that OSU is willing to play a home-and-home. As I write this, they are in the Big XII Championship Game, and Pitt is 6-6, hoping for a bowl. OSU is a quality program willing to make the trip. So my following rant is in no way intended to disrespect OSU:

I thought that Pitt and West Virginia were “Close” (https://fbschedules.com/2013/07/west-virginia-pittsburgh-close-to-reviving-backyard-brawl/) on getting the Backyard Brawl scheduled. That was July. Now, it is December, and still no Backyard Brawl in sight, and future slots filling up quickly.

Pitt Athletic Director Steve Pederson is incompetent, and desperately needs fired. Just ask any of the Nebraska Cornhusker faithful. They knew to get rid of him, while Pitt hires him and now gives him a contract extension.