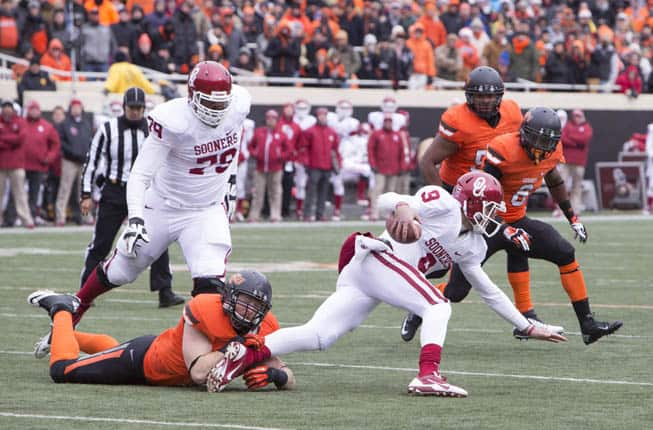 The 2014 “Bedlam” game between Oklahoma and Oklahoma State is set for Dec. 6 at Gaylord Family Oklahoma Memorial Stadium in Norman. The rivalry game was previously announced for either Nov. 29 or Dec. 6.

Oklahoma’s game at Iowa State, previously announced as either Thursday, Oct. 30 or Saturday, Nov. 1, has been set for the latter date (Nov. 1).

As always, those dates and others on the 2014 football schedule could still be altered due to television.

Oklahoma’s Spring football game is set for Saturday, April 12 at 2pm CT, and the Sooners open the 2014 season at home against the Louisiana Tech Bulldogs on Saturday, Aug. 30.

must be nice having no CCG and an extra bye week. a competitive advantage over other conferences.

hope it bites this conference in the ass for going away from the possibility of a 13th game (Conference Championship) and they get left out of the Playoff several times for it!

still my full respects to OU, this wasn’t meant to bash on them!

Well they put a whuppin on Alabama didn’t they? I will take my hat off to Okie’s schedule any day over the Sesleaze (SEC) schedules, 8 conference games, 2 sunbelt and a couple of division 1aa games lol.

Now we know how the Pac 10 felt all those years

yeah they did put a whuppin on Bama.

the SEC schedules are what you said but they usually have at least ONE AQ team.

OU didn’t have a choice. Texas didn’t want 12 teams in the conference and a CCG.

I clearly said this was no bash on OU. just a bash on the Big 12 in general…

Well you can hate on the Big XII all you want. Not having a conference championship game actually hurts us, it doesn’t help.

If Baylor went undefeated last year, they would have been in the National Title game.

The conference doesn’t need a CCG, I promise.

OU has a great chance of going all the way. Don’t lissen to all this big bad SEC hype. The big 10 has a great conference too.