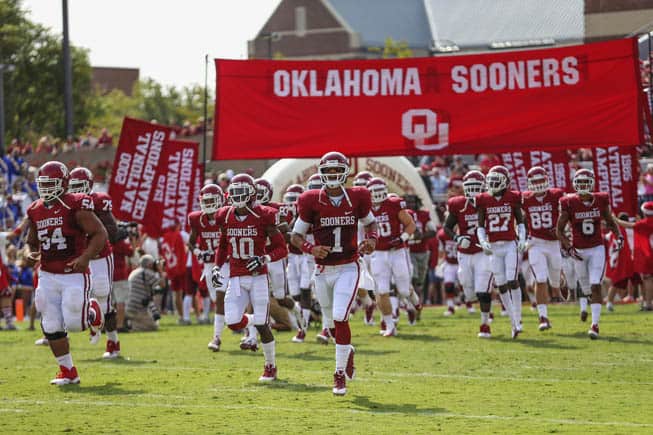 The Oklahoma Sooners have officially announced their 2014 non-conference football schedule, which includes games against Tennessee, Louisiana Tech, and Tulsa.

Oklahoma will host Louisiana Tech at Gayord Family Oklahoma Memorial Stadium to open the 2014 season on Aug. 30. It will be the first ever meeting between the two schools.

Oklahoma returns the trip to Knoxville on Sept. 12, 2015. This home-and-home series has been on the books since it was announced way back in 2005.

The final non-conference game for Oklahoma in 2014 is a trip to Tulsa on Sept. 20. The Golden Hurricane, which will be a member of The American next season, are 7-18-1 against OU.

Dates for the 2014 Big 12 games have yet to be announced, but the Sooners know who they will play and where. Oklahoma hosts Baylor, Kansas, Kansas State, and Oklahoma State and travels to Iowa State, TCU, Texas Tech, and West Virginia. There’s also the Red River Rivalry against Texas at the Cotton Bowl in Dallas.

“We have always strived to feature marquee non-conference opponents on the Oklahoma schedule,” said OU vice president and director of athletics, Joe Castiglione. “Our longtime philosophy of scheduling high-caliber FBS opponents becomes even more important in 2014 with strength of schedule factoring into the College Football Playoff equation. Without question, the opportunity to schedule a two-game, home-and-home series with a program with the tradition of Tennessee is a win-win for both programs and their passionate fan bases.”

“high-caliber FBS opponents” LOL! This is as gutless at U of Texas’ non-conf scheduling!

I wouldn’t call this gutless, this is pretty decent, Louisiana Tech which had a 9-3 last season, Tulsa was 11-3, and Tennessee was 5-7. Tulsa is a local school, always good to play a school nearby thats a home-away series. Louisiana Tech relatively close by and in there recruiting area, I think its one off game. Tennessee a SEC school and bigger name opponent, that they have home-away series with. No FCS schools, big plus. Honesty I really don’t care what Oklahoma does or the Big 12, but I wouldn’t call this gutless, better than a lot of other now power 5 conference schools.

I would agree. Tennessee was better back in 2005 when this series was announced. Louisiana Tech has been good lately, and OU should play Tulsa frequently since they are an in-state FBS school.

I think this is mediocre non conference. But it is better than last year & this year. I wish Oklahoma would play more SEC teams. Wade Allen

Alabama vs OU would be a sweet matchup?

Alabama wouldn’t want to get their tail kicked so early in the year!

Yeah I am sure Alabama is terrified of OU. They couldn’t beat Texas. Get Real

Please. The more SLOOPS keeps runnin that head the better chance he has of getting it handed to him.(See the ghost called Mack Brown). I would love the see the VILES beat his Spooners in 2014, although they may be a few years away. I would take a ‘Bama by two TD all day long. RMFT

Who’s on Bama’s 2014 schedule? Oh, that’s right … Western Carolina. And Florida Atlantic who isn’t much better. You know who Alabama is scared of playing? The other in-state schools besides Auburn. When was the last time Bama (or Auburn) played Troy? Neither of them want to take the less than one percent chance of an upset. And at least OU travels to Tulsa from time to time. It takes guts to forget about the money made by playing 8 home games and travel to an inferior opponent from time to time.

Open vs West Virginia at a neutral site in 2014. Sure they are not the team we are used to seeing, but still a legit opponent. Saban has been pushing for a 9 game SEC schedule, but most other coaches are against it. They need the easier wins against the Western Carolinas and La-Monroes of the world. An 8 game SEC schedule is tough enough as is. I think the last UA/OU matchup was 2003? Shula’s 2nd year? I would love to rekindle that rivalry.

How quickly the masses forget. OU scheduled and played Bama twice, in 2002 and 2003, coming out on top both times. Yep, OU should be scared.

And boom goes the dynamite

well well well…here we are. I thought it would be a helluva game then and I do now. Can the Cream&Crimson rise to the top. Let’s get it on! Roll Tide.

Alabama vs OU would be a sweet matchup?

How did that work out for ya?? You were right it was a sweet matchup!!
Roll over tide!

Congratulations. It was definitely a shocker. Let’s now see if you can win consistently and stay on or near the top. Often, teams that beat Alabama either have a player step up and have the game of their life(Knight)or most everyone involved assumes that the “hay is in the barn” and by just simply showing up, they will be the victors.(Utah) Not so much this time. We will be aight, the Standard of Excellence is firmly in place and the playoffs loom. See ya in January, oh wait, I forgot that OK rises about every 5-6 years, so maybe not. RMFT

All you Bama idiots ,Oklahoma has beaten the Alabama homos the last three times they have met on the gridiron that’s why you won’t see them on the Alabama schedule.

ok. see you in the playoffs beeyatch