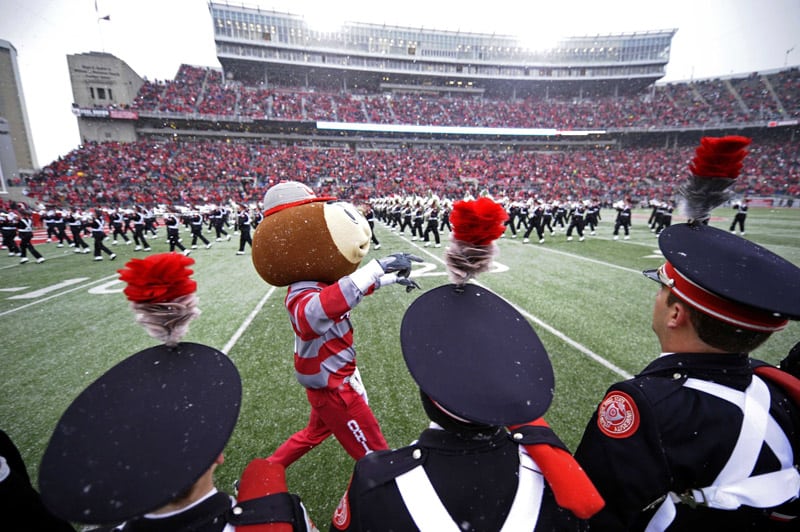 Another home-and-home football series has fallen to conference expansion and nine-game football schedules, and this time it’s an ACC-Big Ten matchup.

The Ohio State Buckeyes and the North Carolina Tar Heels have canceled their home-and-home series that was scheduled for Sept. 23, 2017 in Chapel Hill and Sept. 22, 2018 in Columbus.

“The Big Ten’s move to nine conference games each year beginning in 2016 resulted in the cancellation of our series with Ohio State, which was scheduled for 2017 and 2018. Coach (Larry) Fedora and I will continue to look to add exciting matchups both in Kenan Stadium and on the road as we complete our future schedules.”

North Carolina moved quickly to replace Ohio State by adding a home-and-home series with the Cal Golden Bears for 2017 and 2018. The series satisfies the ACC’s “strength of schedule” mandate that begins in 2017.

The Tar Heels still need two more non-conference games in each of those seasons. Eastern Michigan is scheduled to visit on Sept. 9, 2017 and East Carolina comes to Chapel Hill on Sept. 8, 2018.

Regarding B1G going to 9-game conference schedule in 2016, what’s the deal with Northwestern. This site has four non-conference games listed for Northwestern in 2016. So which game will be (or has been) cancelled?

Don’t know yet, they have not updated their future schedules in awhile.

SORRY TO SEE CANCELLATION OF OHIO STATE NORTH CAROLINA GAMES!! AS AN OHIOAN FROM WARREN AND WOODY HAYES ADVOCATE, I RECEIVED MY MSPH FROM NORTH CAROLINA AND ENJOYED THE SOUTH AS MUCH AS MY OHIOHOME GAMES!!

With 9 game schedule you actually have to plan your series carefully. Big 12 and Pac 12 schools do it already in how you have to plan your home game in series to fall in your 4 conf home game years. If all P5 conf went to 9 game conf I bet they P5 would go to 13 game schedule which would help with getting 7 home games every year. They should all have 9 games because having 8 games in 6-1-1 format like ACC and SEC is asinine b/c you play 6 teams in your conf twice in 12 years

The word is spelled their not there.

OSU is playing 4 B1G home games plus Oklahoma in 2017 and @ TCU in 2018 with 5 B1G home games. To have 7 home games they need to bring in 2 G5 schools. So in a way Matt you are correct, it is a money issue, since home games bring much more than road games.

So is the B1G requiring programs to cancel all games scheduled with FCS opponents in 2016 and thereafter? Or are the games which are already scheduled grandfathered in?

It’s not a out right ban, they said essentially they would strongly like that schools not schedule FCS schools after 2017. Thus the rapid drop off in them from as you noted. Delaney did say there may be exceptions but they want to try strongly to phase them out as much as possible. Part of the 9 game schedule plan besides making sense if you want to play the other cross division teams more than in a blue moon is that it saves money by schools having 1 less pay game a year. Pay games have become increasingly expensive with the average cost over 800K last year.

That will probably be up to the schools whether they want to buy out the games or just play.

There is not and never has been a “requirement” that B1G teams stop scheduling FCS teams. Just like it has absolutely never been a rule that B1G schools need to be in the AAU. Two major misconceptions.

Actually you do have to be a AAU member. Nebraska lost theirs after joining but they were giving time to re-apply to get it back. Otherwise most of the old big east schools would had joined already. Half of the Big 12 schools are members and wanted to join the B1G after Nebraska left.

Being in AAU is a strong guideline because of the money and resource sharing of the CIC. They want to share with the cream of the crop academic institutions. But AAU is not a stone cold, hard and fast rule. They had a virtual open invitation to non-AAU Notre Dame throughout the 90’s and much of the 2000’s, even issuing a formal invitation to the Irish in 1999. In Nebraska’s case, the Big Ten schools knew Nebraska was on its way out because almost every single Big Ten school voted them OUT of the AAU a few months after UNL joined. Clearly, the Big Ten was willing to make exceptions to the AAU-only guideline for Nebraska because Nebraska is such a popular, premier brand name in college sports. I would further argue that if the B1G could somehow get Oklahoma without having to take Ok. State, they’d go for it. But they won’t make exceptions for less than premier brand names like those Big East schools you referenced. WVU and UConn have a lot to offer, but they don’t carry the same factor of must-watch-TV as an Oklahoma, Nebraska, or Notre Dame. Other former Big East schools like Cincinnati and Pitt stood no chance because their markets overlapped, USF and Louisville would never have been considered because their academics were waaaay outside AAU levels, while Syracuse was passed over, ultimately, in favor of Rutgers, which, admittedly, benefited greatly from its AAU membership.

Notre Dame is deemed an elite school top 20 in the country so AAU is not a factor in their previous offers to join the B10. ND can not be AAU or even apply b/c they lack some of the requirements. Nebraska lost AAU based on changes in rules, part was on how research grants were counted and weighted. Also, their medical school is not officially on their campus. They actually lost the vote to stay in by only 2 votes. Not all B10 schools voted against them actually only 2 voted against them.

Syracuse resigned from AAU rather than go to a vote like Nebraska. SU and Rutgers in academic rankings are essentially the same. The reason Rutgers was taken over Syracuse was about tv markets. Rutgers is in the NYC tv market, the largest tv market in the country. The market also includes North Jersey and western CT. Syracuse tv market is 250 miles from NYC and is the 81st in the country.

The reason B1G didn’t get Syracuse is because ACC got there first. Syracuse and Pitt announced in Sept. 2011 that they were joining the ACC. Rutgers and Maryland announced they were moving Nov. 2012. Syracuse wanted in but B1G didn’t get there fast enough and had to settle for Rutgers.

As far as markets go, Syracuse is on every TV in New York state, including NYC and Long Island, covering about 20 million people. There are a ton of Syracuse fans in NYC, and they packed MSG when they were in the Big East. They also have penetration into Vermont, Western Mass and Canada

New Jersey’s population is about 9 million. They get TV penetration in the NYC metro, so you could add another 8-9 million, so it’s probably a draw at best.

UNC should take a shot at playing Penn State

OSU 4 Big10 home games are odd years thus they need to schedule all 3 OOC’s at home to get to the desired 7 in odd years. OSU has 2 P5 opponents scheduled in other odd years so it’s about the home game number. UNC series could have stayed if UNC would have switched the 2017 to Columbus and 2018 Chapel hill. UNC has more flexibility as they have 8 game conf schedule. Clearly UNC didn’t want to do that as they booked Cal in Chapel Hill 2017 and 2018 away which was the same pattern of the OSU series.

You haven’t a clue. The B10 didn’t want syracuse or pitt. They are tiny tv markets, Rutgers is NYC market the biggest in the country by far. If the B10 actually wanted either they could have got them long before. All of the Big East SU. Pitt. UL, etc..where begging and calling to join the B10 and the B10 had no interest.

You clearly have no idea how tv markets work concerning tv deals by your comments. A tv market is described as the radius around a city. Usually 75 to max 100 miles. SU does not constitute the NYC market and thus would have not given the B10 what Rutgers does. It’s not even close to a draw as you claim but you clearly don’t understand how things work. SU may be on in NYC but they don’t under media have the market..ie..If Rutgers(B10) and SU(ACC) are playing at the same time Rutgers being in that market means NYC, NJ, west CT..their market gets Rutgers over SU. SU will be priority in central NY where SU is located. Also, by having that market of NYC in the B10 all B10 games, even ones not with Rutgers become the regional game not the ACC though the ACC has SU a NY state team. ABC/ESPN own rights to B10 and ACC so B10 trumps ACC as described above and that’s huge in a massive tv market like NYC metro. Also, with the B10 network with Rutgers they expand in to NYC metro and all of NJ as member markets playing 1.10/mth.