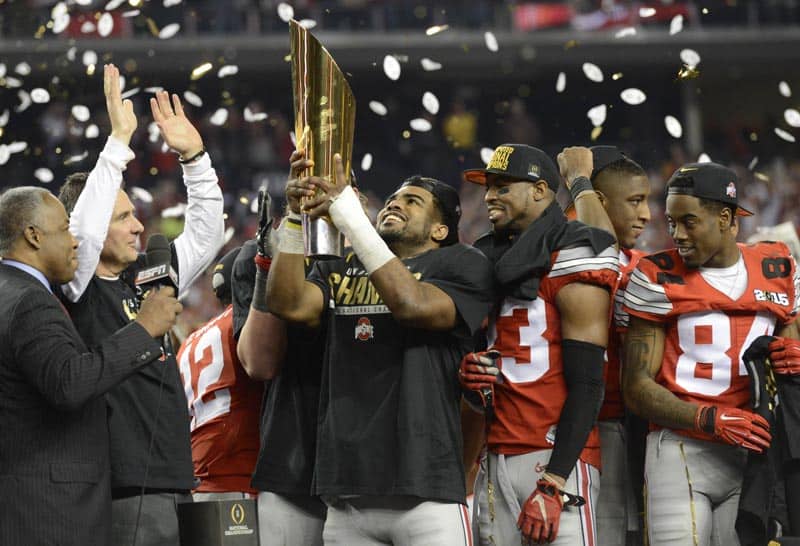 Ohio State (14-1, 8-0 Big Ten) claimed their first National Championship since the 2002 season when they defeated Miami (FL) in the 2003 Tostito’s Fiesta Bowl.

Oregon got off to a fast start in the game after scoring on their first drive to take a 7-0 lead. But the Buckeyes answered later in the first quarter and never trailed again.

Ohio State was led by quarterback Cardale Jones, who stepped in after season-ending injuries to Braxton Miller and J.T. Barrett. Jones finished the game 16-of-23 for 242 yards, one touchdown, and one interception. He also rushed 21 times for 38 yards and another touchdown.

“This will go down as one of the great stories in college football history,” Ohio State head coach Urban Meyer said.

The Buckeyes also got it done on the ground behind Ezekiel Elliot. The sophomore running back gained 246 yards on 38 carries (6.8 avg.) and scored four touchdowns. For his efforts, Elliott was named the CFB National Championship Offensive MVP.

Of course, Ohio State also finished the season as the number one team in the final AP Poll after receiving all 59 first-place votes.

Ohio State now heads into the 2015 season as the likely preseason top-ranked team. The Buckeyes kick off their 2015 schedule at Virginia Tech on Monday, Sept. 7 (Labor Day).

Oregon will have to regroup heading into next season, and will likely lose Heisman Trophy quarterback Marcus Mariota to the NFL Draft. The Ducks open their 2015 schedule at home vs. Eastern Washington on Sept. 5.

Congratulations to The Ohio State & Big Ten for bouncing back. Buckeyes dominated when they needed it the most & it shows Urban Meyer is great for a reason & why Buckeyes hired him. Enjoy your trophy!

Two comments: Firstly, Congratulations Ohio State you deserve this great win. Secondly, I would imagine that Florida State is grateful they didn’t have to play you.

But the official sanctioned NCAA Champion is North Dakota State.

So when is the last time, in college football history, a team went out and beat the #1 team and then next week, beat the #2 team?

When is the last time that a team played all 3 top Heisman finalist in consecutive weeks? And all 3 players played on teams that were favored? And then limit all 3 players? And then beat all 3 teams?!!! Go Bucks!

Are you currently learning the English language? Your written comments were a bit disjointed.

Let’s just put this luck thing behind us ok. It’s legit it happened ohio state buckeyes are national champions. Ya’ll just wished your team were in this position. The playoffs were coming sooner or later just deal with it. Obviously we deserved it because we just beat the #1 and #2 team in the nation………it the nation……..let that simmer for a little bit………..IN THE NATION!!!!!!! ENOUGH SAID!!!!!!

Congrats to the Buckeyes! As well, congrats to the Big Ten for having their Champion win the National Championship. With The Ohio State winning the National Championship I think this is a good time to point out it was the Buckeyes that won and not the Big Ten. As were the times Alabama won or Auburn did, it was those individual schools winning and not the SEC. I know many believe the SEC, and in particular the SEC West, is “so” strong, but my belief there are many within the SEC that are riding the coat tails of their Big Brothers. There is a lot of parity in College Football and truly just a few elite programs (sorry), and yet some schools wisely hide behind their Conference’s “power” teams and try to appear to be a “power”. I think the SEC schools and conference itself, do the best job of hiding their weaknesses.

The SEC NC Schedule again continues to be a joke in this coming 2015 and they continue to be allowed to be “rewarded” for their bad behavior. This may not be a scientific approach to measuring the 2015 NC schedules, but try to absorb this; When measuring all 64 of the “Power Five” Conference Schools for this coming 2015 season the SEC has nine (9) of the nineteen (19) weakest non-conference schedules. The measurement tool is simple; Award team – 3 points for each NC Power Five opponent scheduled, 2 points for each scheduled FBS opponent, 1 point for each away game (regardless of the opponents level), .5 (half) point for neutral site game of greater than 125 miles distance, 0 points for any FSC opponent and then divide that total by the total number of non conference games. A score less than 2.0 shows a real weakness in a non-conference schedule. Both Kentucky and Missouri scored the lowest with scores of only 1.25. Auburn, Ole’ Miss, Mississippi State and Texas A&M came in tied at tenth with scores of 1.75.

As for the results of the other four Power Five Conferences: ACC’s lowest was North Carolina in third position with a score of 1.63; The Big 12’s lowest were the four schools of Baylor, Kansas State, Oklahoma State and West Virginia coming in with scores of 1.67 that positioned them in a fourth place tie; The Pac 12 as well had their lowest scores being 1.67 with both Arizona and Washington tallying that total; and as for The Big Ten every school scored 2.00 or higher.

Only 19 schools scored less then the 2.0 Mendoza Line and again nine (9) of them were from the SEC. On the other end, fourteen (14) schools scored 2.5 or higher without a single SEC school being in that category. The two single highest scoring non-conference schedules were those of Stanford and Texas, both with 3.00 scores.

Look forward to comments and further questions. This scoring system measures the known facts. Whether a team is “ranked” higher or not is not used, this is just a simple fact base measurement.

Get it right people. They are the 2014 national champions, not 2015. You go by regular season, not the year the game was played. It has to be that way or else you will skip a year in the list of champions.

They won the “2015 College Football Playoff National Championship.” The year is even on their jerseys (see the photo). But most people know that it was for the 2014 season.