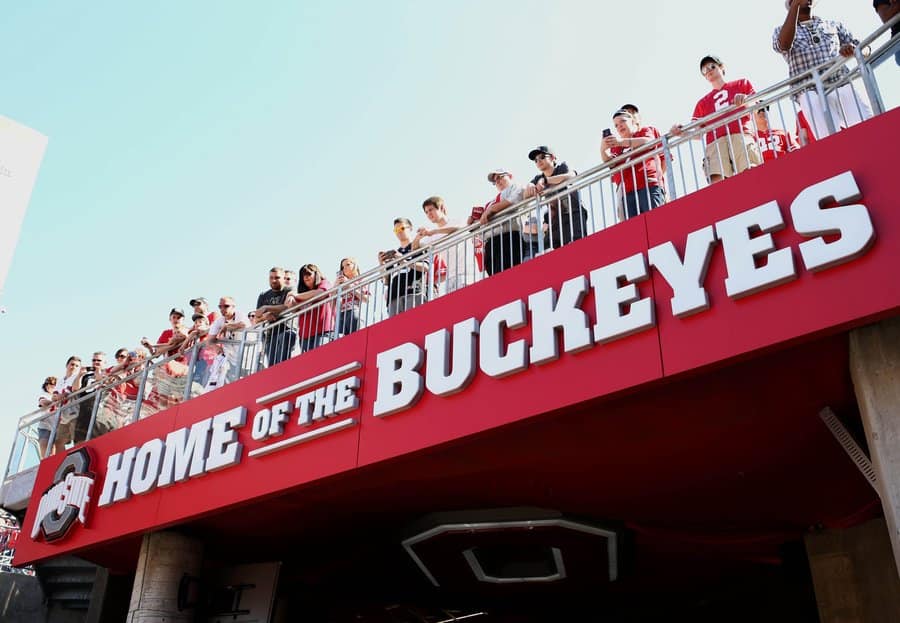 Ohio State will host Tulane on September 22, 2018, the schools announced earlier Thursday.  The agreement will cover this single game.

“Tulane enhances and completes a non-conference schedule in 2018 that already includes Power 5 conference teams TCU and Oregon State,” said Ohio State Deputy Director of Athletics Martin Jarmond in a release issued by the school. “The Green Wave is part of a fine American Athletic Conference, which produced a New Year’s Day 6 bowl winner last year [Houston over Florida State in the Chick-fil-A Peach Bowl], so its first trip to Ohio Stadium should be exciting for our students and fans.”

“We are excited for the opportunity to play Ohio State, one of the premier programs in the country. Our coaching staff and players, along with our fans are eager to play against the very best and this should be a great game. There will be a significant number of Tulanians from around the country joining us at the Horseshoe,” stated Macneill.

The game will be the first to be contested between the Green Wave and Buckeyes.

Tulane will be Ohio State’s second non-league opponent in the Horseshoe in 2018 (Oregon State on September 1 the other), with a trip to TCU planned for September 15.  The Ohio State tilt joins Georgia Tech (September 8) and Wake Forest (TBA) on Tulane’s 2018 slate.

Your site states Tulane is playing Georgia Tech & Wake in 2018.

We had it listed in one section, but not the other. The copy has been updated – thanks for the heads-up.

Probably counts as a power five opponent since Tulane was at one time in the SEC.

Actually Joe, it doesn’t. As the article mentions, the Buckeye’s already scheduled 2 other power 5 non-conference games in 2018, meaning 67% of their non-conference schedule will be against power 5 opponents. This percentage is higher than all SEC schools in 2018. I wouldn’t have expected you to pick up on that given the lack of education provided down in SEC country.

What Jeff is trying to say is that every Southerner is stupid. That includes all African-American Southerners. Jeff is a racist, plain and simple.

Webster’s defines a joke as “something said or done to cause laughter.”

Everyone else got it.

It’s interesting that Jeff got so offended by that…

Well, at least his wife still likes me.

They are really desperate to justify this game and get people excited about it, aren’t they. “Tulane enhances… a non-conference schedule”, “Green Wave is part of a fine… conference”. The American is a fine conference, but Tulane finished last in the conference in 2015. They are grasping at straws mentioning that Houston beat Florida State. Yes they did, but what bearing does that have on Tulane? None. Ohio St has already scheduled 2 P5 games for that year with one on the road. I have no problem with them scheduling a team like Tulane. And I can’t stand Ohio St. It wasn’t an FCS team and it’s a school they’ve never played before. There’s your selling point. Why can’t the statement be, “Our 2018 schedule is complete. We’ve scheduled Tulane, whom we’ve never played before.” Or something like that. You don’t belittle Tulane, and you bring something new to the schedule. Let Tulane take the forefront on this and if you feel the need, make a simple statement. These P5 schools need to stop trying to oversell these match ups in an effort to not offend the smaller school. It’s obvious and perhaps a little offensive.

Title IX, thanks for speaking for me and clarifying what I was trying to say (since things are plain and simple to you, I want to clarify that I am being sarcastic). I would be really interested to hear more behind the logic as to how you took my comment and came up with racism. My original comment was a jab at SEC country in response the jab given to the Buckeyes. My jab stemmed from the lack of thought given by Joe in his comment around strength of schedule as a whole. The SEC has this internal bias that their schedule is far tougher than any other conference schedule. While I would agree that a SEC West schedule is generally tougher than say the Big Ten or Pac 12, I wouldn’t say it is by a significant margin. My reasoning is that the SEC non-conference schedule is an absolute joke. It would be difficult for a SEC team to enter their conference schedule with a record worse than 3-1 or 4-0 based on the lack of competition they face. For instance, in 2016 the SEC plays 56 non-conference games, of which only 15 of them (27%) are against power 5 schools and worse, 14 of them (25%) are against FCS opponents. Comparatively, the B10 plays 42 non-conference games in 2016 with 13 games against Power 5 schools (31%) and only 8 against FCS schools (19%). How do the rest of us truly know how good that 4-0 Mississippi State juggernaut is when their wins are against Southern Miss, UAB, South Alabama and UT Martin. I’m sorry if any of you SEC individuals were offended by my original comment, though it would be nice to see a little bit more thought coming from the majority of the pro-SEC commenters on these message boards.

No. The SEC doesn’t say their schedule is toughest. Phil Steele, ESPN, Fox Sports, and every other expert in the business of college football says the SEC schedule is the toughest.

I love these schedule arguments and how they leave out the most important piece… the fact that teams in the SEC will play more NFL level players (players that will be drafted by NFL teams) in their eight conference games, than teams in the Big Ten, or any other conference, will play on their whole schedule.

But I wouldn’t expect a guy like Jeff, who obviously is a racist, to understand that.

ESPN and CBS have to say that the SEC is the toughest and use every flimsy argument that they can find to support it because they paid through the nose for the SEC’s tv rights and to try to get a return on their investment they need to perpetuate the “SEC is the best conference” myth. ESPN will use any opportunity they can to belittle the Big Ten because their tv rights are up for negotiation and ESPN is being cheap and doesn’t want to pay top dollar for the content.

The NFL doesn’t have to say it and they do every draft class.

That’s funny, I always see ESPN bragging on Ubran Meyer & The Ohio State on how good they are & are going to be. ESPN is in it for the money & TV ratings, you may not know this but ESPN LOST money on the Bama vs Clemson game, why? Due to being two southern (east-coast) teams & knowing most of the mid-coast & west was not going to watch, they had to play around with the commercials at the end of the game to keep people intrigued. Once again an SEC basher who luvs to bring up the worst of college football picking on an SEC team in which he/she could careless about. Doubt his/her name is even Ryan.

Playing eleven P5 opponents in a single season (9 conference games plus two OOC games) puts Ohio State in somewhat elite company. The 2018 schedules for many schools is not complete, but I know that in 2016, only four of the 65 schools who make up the five P5 conferences (plus Notre Dame) will play eleven P5 schools. They are Stanford, Texas, Oregon, and Oregon. Stanford and Texas were the only two who did in 2015. Florida State did it in 2014