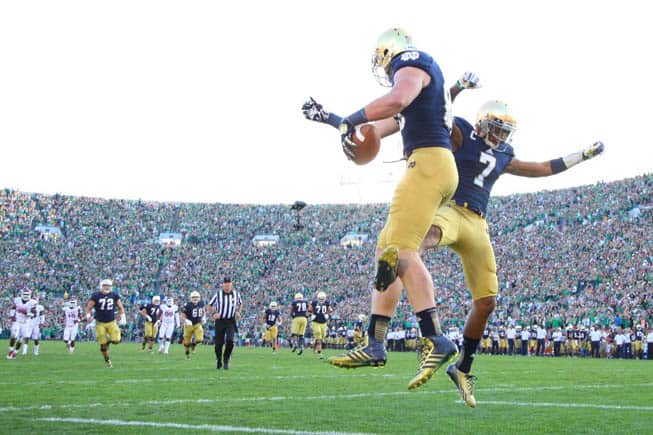 Yesterday, the Notre Dame Fighting Irish announced a future football series with the Georgia Bulldogs for the 2017 and 2019 seasons.

The series is a good one for two reasons. First, an SEC team is traveling north to take on a big-time program in their own stadium. Second, the Fighting Irish get to play in the Southeast, in this case the recruiting rich state of Georgia.

But the addition of the Georgia game in 2019 has caused a problem with Notre Dame’s previously scheduled four-game series with the Texas Longhorns.

In the third game of the series, Notre Dame is scheduled to play in Austin on August 31, 2019. But since they are now playing at Georgia the same season, the Irish want to postpone the 2019 and 2020 games to later seasons.

Notre Dame senior associate athletic director for media and broadcast relations John Heisler told the South Bend Tribune yesterday that they have informed Texas of their desire to move the games.

“We’re hopeful that we can move those games somewhere down the road into the next decade,” Heisler said. “We’re trying to create as much variety as we possibly can and let our fans see as many teams as they can.”

With Notre Dame scheduled to play five ACC teams per season, plus Navy, Stanford, and USC, they only have four other games to schedule in any given season. And they also have several future games to play against Michigan State and Purdue and four more games contracted against BYU.

That doesn’t leave a lot of variety in their scheduling, so it’s easy to see why the Irish want to space out the series with Texas.

On a side note, ESPN reported yesterday that one of the Notre Dame-Texas games was set for 2017. There’s likely some miscommunication there or one of the games was moved without an announcement. We’ve reached out to both schools for clarification.

Here is the deal

1. ND is contractually obligated to provide NBC with 7 televised games each season. This means that ND cannot schedule more than 5 true road games on any given season.

2. ND has a quasi conference schedule each season consisting of 5 ACC opponents, USC, Stanford and Navy. This is split up into 4 home and 4 road games every season, starting in 2015.

3. ND can schedule 4 additional games each season however only 1 of those match ups can be a true road game. Hence ND could not play at Georgia and Texas in 2019.

notre dame plays 6 home games a year.. have been doing so for years. they play 6 this year and 6 next year.

It will be interesting to see how Texas handles this. The new Texas AD is the former ASU AD who didn’t give into ND when the Irish didn’t want to go to Arizona.

I would rather see Notre Dame play Texas, than some crap team in the ACC.
Hey Notre Dame, MANUP, and play both Texas and Georgia in the same year!!

ND doesn’t want to get stuck playing some crap team on the LHN.

Nope! They’re still to scared and they can still use the “its our decision now” bit!

Why the hell would anybody be scared to play A&M; a second tier, pretty much irrelevant program that has a decent season every 10 years or so.

We’ll see if Texas agrees to this. I hope they don’t; ND signed a contract to play Texas, so they should play Texas.

Just would like to state that Texas has won 76 of the schools’ 118 meetings. Texas refusing to play is not a matter of “fear”. Because of the unethical way atm left the conference while OU and Texas (the daddys of the Big 12; atm usually finished near the bottom of the conference) were having re-alignment discussions, Texas and OU boycotted the ags as a means to punish a&m causing them to lose at least half of the revenue they generate from playing the Horns and the Sooners every year.

Just would like to state that a lot of those victories were played when the Aggies were off at war protecting longhorns to stay arrogant. End everything else about your statements are false as well.

Jason- I think you are confusing the football team with the core haha, losing your yell leaders has no affect on the football team. Especially considering the war years of bear bryant were aTm’s glory days your statement is ignorant and farcically aggie.

I know I might be pounced on for this, but:
Would someone please explain how the pretend soldiers called ‘the Corps’ makes it OK for aTm to call themselves “military”?
Or to claim that their alumni have “defended their country” any more than any of their rivals – who do not prance around in boots and uniforms, and claim to be “soldiers”. I grew up in the area, but have never understood this obvious discrepancy. Also have visited real military schools like West Point and The Air Force Academy. Had an extensive tour of aTm when I was offered a grant before my freshman year. They are not the same. Glad I had no interest in a military environment – pseudo or real – and went where I got the best possible life experience.
Obviously, I am biased. But the question is sincere.