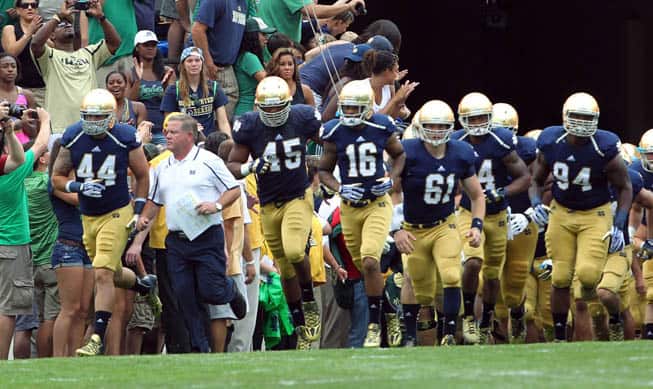 Notre Dame’s agreement to play five ACC football teams per season has them hosting Louisville in 2014. According to Louisville athletics director Tom Jurich, the Cardinals are set to host the Fighting Irish in 2017 and will return to South Bend in 2020.

Speaking with reporters at a Rotary Club meeting on Thursday, Jurich said that it looks like they will play Notre Dame “every three years.”

Back in April, the ACC announced Notre Dame’s opponents for the 2014-16 seasons. The Irish will play all 14 ACC members during that span and will play Syracuse twice.

Since there are only 14 ACC teams, Notre Dame will have to play one member twice during each three-year span. It’s not yet known if that will be Syracuse each time. The Orange were already slated for games against the Irish at MetLife Stadium in 2014 and 2016, so those games were kept on the schedule.

Jurich also told The Courier-Journal that Louisville had previously agreed to a three-game series with Notre Dame for 2007 through 2009. The two schools were to meet home-and-home and once at Lucas Oil Stadium in Indianapolis.

The series never happened though.

“It had to be passed by their coach, and their coach vetoed it,” Jurich said. “It was in his contract he was able to do that. It was Charlie Weis. That’s understandable. The coaches want to play the teams they pick and choose. We were on a great high at that time.”

Hum surprised this wasn’t Pittsburgh more than Syracuse (only has 6 games series history), as Pitt-ND has 68 games behind it, or Boston College while only 22 games, its still the only two Catholic FBS schools, one of the games could have been a neutral location. Georgia Tech-ND has 34 games, Miami-ND has 25, UNC-ND has 18, even FSU-ND has 7 games. Not sure if the article was acting like Syracuse-ND was big, or that they had already done a three game series before that they would do it again? I am guessing the Irish were looking for some to come twice and not many teams were up for that. If I were the ACC, I would say hey we average 5 games a year and one year we do six to get a fair series, rotating someone they have played a lot like Pittsburgh, Georgia Tech, Boston College, Miami, or UNC. I guess you could throw in Syracuse and maybe Virginia as they are near population centers that ND wants to play in.

Hey have you noticed the three years in between each game. You will get to see them play those other teams, Notre Dame has to play 5 teams a year