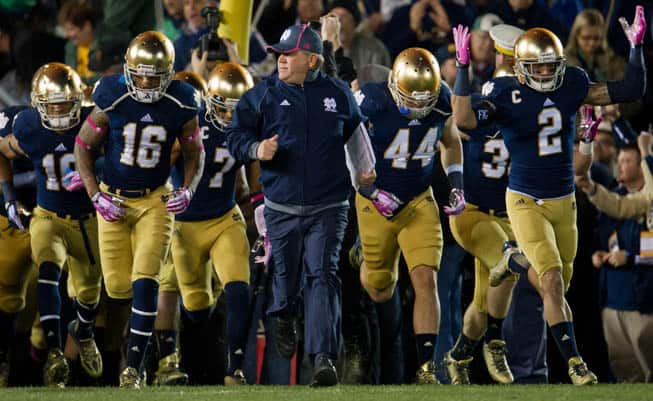 The Notre Dame Fighting Irish have announced kickoff times for their 2014 home games and their “Shamrock Series” contest against Purdue.

Notre Dame’s “Shamrock Series” game against the Purdue Boilermakers will be played at Lucas Oil Stadium in Indianapolis, Indiana on Saturday, Sept. 13. The game will be televised by NBC at 7:30 p.m. ET.

The Michigan game on Sept. 6 will be televised by NBC at 7:30 p.m. ET. It will be fourth consecutive season that the two schools have squared off in prime time.

The Fighting Irish open the 2014 season at home against the Rice Owls on Saturday, Aug. 30. As previously mentioned, that game will be televised by NBC at 3:30 p.m. ET.

Notre Dame is set to begin Spring practice on Monday, March 3 and the Blue-Gold Spring game is scheduled for Saturday, April 12 at Notre Dame Stadium.

Three true road games the whole year, none until mid-October. What a joke.

Very true, but their home schedule is tough enough that they could lose anyone of them. I think ND will finish 9-3 or maybe 8-4.

How does one get tickets to the ND Spring game??

They will announce on their official site, http://www.und.com., when they go on sale.

The Notre Dame box office – or call the Meier’s on the North side of South Bend. Previously they have sold tickets to the Blue Gold game at a discount.

There’s actually five road games, plus one at a neutral site. And the first road game is September 27th. You couldn’t be more wrong.