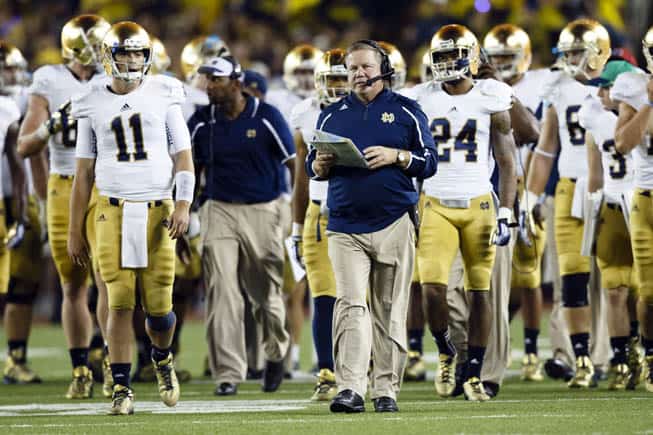 In 2014, Notre Dame begins its football partnership with the ACC, a liaison that requires the Irish to play five ACC games each season.

Scheduling conflicts transitioning into the new scheme have Notre Dame playing four ACC games in 2014, six in 2015 and then the standard five in 2016.

Since the 14 schools which are full members of the ACC play eight conference games each—with nine still up for discussion—it’s obvious that Notre Dame’s schedule won’t be completely transformed by the partnership.

But, that said, what’s the difference for the Irish and will it make their road to the College Football Playoff easier?

To answer this, first it’s crucial to understand the basic components of Notre Dame’s schedule before the change. Though the Irish are technically Independent, their schedule has had three common threads over the last dozen years.

The three teams Notre Dame has played the most consistently in recent years is the combination of USC, Stanford and Navy.

The Irish have played Navy each year since the series began in 1927, USC consecutively since 1946 and Stanford every season since 1988. This means that the last time Notre Dame didn’t play the trio was in 1987.

Another long-term relationship exists between the Irish, Michigan State, Michigan and Purdue, all Big Ten programs from the same geographic region.

Though the all-time series for each stretches longer, Notre Dame has squared off with Purdue every season since 1946, Michigan State in consecutive years since 1997 and Michigan since 2002.

The last time the Irish didn’t face the Big Ten contingency was in 2001.

Though less consistent than the Pac-12/Navy and Big Ten fixtures, Notre Dame has played teams which are now ACC members on a regular basis.

The Irish have faced both Pittsburgh and Boston College five of the last six seasons and eight of the past 12 years.

Overall, Notre Dame has played at least two current ACC programs each of the past 12 seasons with the exception of 2013 when it played only one, Pitt. Six of these years—or 50 percent of the time period—it played three or four opponents who are now ACC members.

What Changes With the ACC Partnership?

While Notre Dame has been Independent since it started playing football in 1887, it has played a common core of six opponents every season since 2002.

It adds up to 72 games out of a possible 144. Throw in the 32 games Notre Dame has played against current ACC members since 2002 and 104 games have been slated against a combination of the three fixtures listed above.

Another interesting bit is Notre Dame’s practice of scheduling military academies outside of its ongoing relationship with Navy. The Irish have played Army or Air Force seven times since 2002, facing one or both of them six of the last 12 seasons.

The grand total of all these “regular” foes on what’s meant to be an independent schedule is 111, leaving 33 games against “other” opponents.

To put this in perspective, since 2002 USC has played 43 non-conference games versus 102 games with Pac-12 foes.

Where Notre Dame played 23 percent of its games against non-regular opponents, USC played 29 percent. The only difference is, USC is a full-fledged member of the Pac-12.

The first point to make is that Notre Dame’s schedule is less independent than advertised. It’s more a set menu of pulled pork, beans and coleslaw with a rotation of “other” side dishes than a full-blown potluck dinner every season.

As to what changes with the ACC partnership, the main difference is that the Big Ten contingency will be replaced with two to three additional ACC opponents.

Though Michigan and Purdue are both on tap in 2014 and Michigan State is on the schedule for 2016 and 2017, these games will no longer be a permanent feature of Notre Dame’s regular-season slate. None of the three are scheduled beyond 2017.

Will this make things easier for the Irish?

Believe it or not, the net effect is negligible, at least based on history. Since 2002, Notre Dame is 21-15—or 58 percent—against Michigan, Michigan State and Purdue.

Though it will ultimately depend on which combination of ACC teams Notre Dame draws each year versus how well the Big Ten contingency plays in future seasons, the Irish won’t have a competitive advantage with their new partnership.

The flip side of the question is whether Michigan, Michigan State and Purdue will gain an advantage by not having to face the Irish on a yearly basis. This argument becomes more valid as Notre Dame continues to gain momentum in the Brian Kelly era.

At least for this year, it makes the schedule a lot harder since they’re doing both…and it’s why they’ll make the college football playoff: http://stholeary.blogspot.com/2014/04/notre-dame-will-make-first-college.html

Out of these opponents, Purdue is probably the one Jack Swarbick would remove from a schedule, despite that they’re their closest opponent, because of their recent lack of success.
I know that the Michigan rivalry is off right now, but it should be brought back one ND’s schedule frees up, like in 7 years or something.
They could do something like a three-year rotation between playing Purdue, BYU, and Army, filling that 12th slot.

NOTE: This is just what I think it should be.

Swapping out the Big 10 with the ACC is going to be much harder for ND – specifically because of the three year rotation. When you play the same teams year after year, you learn their tendencies. With the ACC rotation, ND will have to have new game plans every week, which is going to make it very difficult to go undefeated.

They are 37-15 under Brian Kelly and 2-2 in bowl games. Sure, they got dominated by Alabama, but that’s hardly “circling the drain” in my opinion.

Lot of teams get dominated by Alabama,no shame there….Kelly does have ND headed back to elite status.

Your in the mafia? wow…

:) Sure, circling the drain. Vegas has them at a pretty respectable 40-1 to win it all in 2014, meaning somewhere in the middle of the SEC pack. Surely you aren’t saying that SEC teams like Texas A&M, Clemson and Florida are “circling the drain”? Because Vegas isn’t.

If the most private schools in the NCAA drop football due to unionization, how would that effect the relationship between Notre Dame and the ACC?
What if Stanford isn’t bluffing about dropping division 1 football, how will that work for USC?

Conference realignment isn’t quite as done as people lead on, the wait is on the litigation with Maryland and the ACC.

I do not get Notre Dame fans. Brian Kelly has lost a minimum of 4 games each year he has coached at ND except for one. That ONE so called magical year ended by getting overpowered and overmatched. Is losing 4-5 games at ND acceptable? How is that momentum? ND is mediocre at best and I am not sure why ND fans are so arrogant? I am an Alabama fan and if Coach Saban was having 4-5 loss seasons, he would be gone. Last year he won an SEC Championship and lost a playoff and fans thought it was a lost. The bar has been set so high in T Town that losing is unacceptable. So again my question is, why are ND Fans delusional and unrealistic?