Notre Dame to play at Arizona State in 2014, game at Notre Dame in 2017 canceled 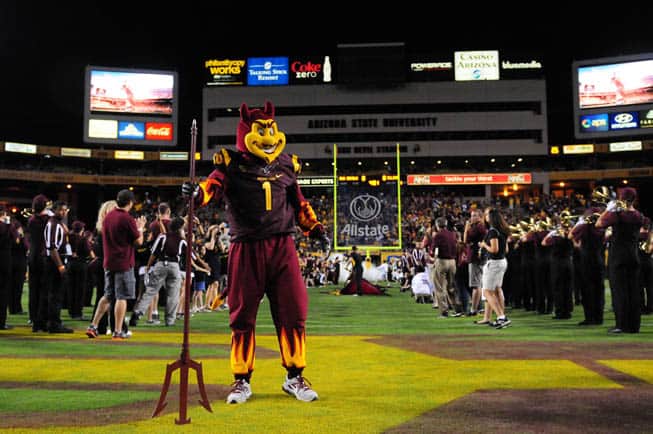 Arizona State and Notre Dame have reached an agreement that will still have the Fighting Irish playing at Sun Devil Stadium in 2014, ASU announced today.

The game will be played on Nov. 8, 2014, two weeks later than the originally scheduled date of Oct. 25. As a result of the agreement, the Arizona State at Notre Dame game in 2017 has been canceled.

“We’re pleased that Notre Dame was able to resolve its scheduling issues in a way that allows it to play at Sun Devil Stadium in 2014,” said ASU Athletics Director Steve Patterson. “The game will now be played on Nov. 8, 2014. Our entire Sun Devil family–season ticket holders, fans, students, alumni–and our entire community here in the Valley have been looking forward to playing Notre Dame in Tempe since the original agreement was signed in 2008.

“While the game at Notre Dame in 2017 has been canceled, what is most important to us is that the game in Tempe has been saved. Under a separate agreement we also play Notre Dame at Cowboys Stadium in Arlington, Texas on October 5, 2013.

“These are exciting times for our football program and having a special opponent like Notre Dame travel to ASU will make for another memorable experience.”

Back in April, ESPN reported that Notre Dame had dropped Arizona State from their 2014 football schedule. The report caused ASU to release a statement that they “still have a valid contract with the University of Notre Dame to play football in 2014. We look forward to hosting them at Sun Devil Stadium.”

Retaining the home game against the Irish is a big boost to Arizona State’s 2014 non-conference slate. The Sun Devils also host Weber State and travel to New Mexico.

Per AZCentral.com, Arizona State was concerned that the loss of the Notre Dame game would have a significant impact on ticket sales and other financial areas. The Sun Devils also scoffed at Notre Dame’s replacement suggestion of Purdue.

Notre Dame still has to cancel two games from their 2014 football schedule. The addition of five ACC games per season left the Fighting Irish two over the limit of 12 games.

Based on the fact that Notre Dame shopped Purdue to Arizona State as a replacement, it seems likely that the Irish will eventually drop Purdue from their 2014 schedule. Other games that Notre Dame could target for cancellation are Rice, Northwestern, and at Temple.

This is only going to add more speculation to the rumors of The Boilermakers traveling to BYU in 2014.

Please fill us in, haven’t heard this one. Thanks in advance.

Haven’t heard that rumor either.

Notre Dame is shopping us around so they do not have to give us any consideration. One of the teams that has shown the most interest in playing us is BYU. The Irish tried to pass us off to ASU their AD said “no thanks” and threatened to enforce their contract. They want to drop us and Temple to make way for the ACC portion of their schedule. That leaves us looking for a game on short notice in 2014. Before this ACC agreement BYU was anticipating ND to play at BYU in 2014.

That is why BYU is missing a game in 2014, it was supposed to be ND, with ND backing out and now playing at BYU in 2017 it leaves BYU with a game and when (not if) ND drops us in 2014 it is not bad for either team.
I would rather play ND, I am guessing BYU would rather play ND too. But while BYU and Purdue
are not gonna be getting picked up by NBC. Given the match up, I would have to guess it would be on ESPN2 worst case scenario.
Utah is a great place. I was out there during the 2002 Olympics, nice folks, beautiful place, good road trip.

Thanks for that Thomas. It’ll be interesting to see how all of this shakes out.

Thanks. When would a return game in W Lafayette be? So you hear the 4 remaining ND-BYU games would start 2017? I presume this would mean games four consecutive years.

Thanks again for the info, sounds like an interesting game, like when non-traditional opponents play, particularly when out of region

@dbrunstheworld
Not sure if this is what you want to hear. I have only heard talk of 2 options.

If you are a BYU fan this next part could be good or bad.
The 2018/2019 Game would not be in Provo. It is being discussed as an International game in Ireland or England, with BYU as the home team. Like when ND played Navy in Avia last season.
Good luck, hopefully we can both still play ND and each other going forward.

As an alum, I have heard ND vs BYU @ Old Trafford in 2018. If you are a fan of sports, there is great history at that particular stadium. It would be an excellent road trip for the Irish faithful and one this old man will not miss.

The location is still not decided. Ireland is still in the mix for this game in 2018.

As a BYU fan, I hope you’re wrong about BYU not getting a home game in the series. (Playing in Ireland is not a home game.) I’ve been looking forward to seeing the Irish play in Provo, so it would be majorly disappointing to see them play the game in Ireland instead. Like most sports fans, I don’t have the money sitting around to afford an expensive trip across the pond.

Brock,
ND will still play at BYU in 2017. It is only if they decide to add another 3 games to the series, Notre Dame wants 2 home games and 1 away, if the away game is an international game.

Looks like ND has completed their 2015 opponents with the ovement of Temple. So next BYU-ND game will be 11/18/17?

As a Hurricanes and Sun Devils fan, I like seeing that Notre Dame has to play in Tempe. I hope ASU wins both matchups since ASU is on an upswing right now. ND usually wins in these issues but ASU getting a home game and a neutral game is cool.

I really don’t like the trouble this ACC agreement is having on ND future scheduling. Seems like a half arse attempt to stay independent but also get in a conference. Having five games vs ACC each year is a bit much and I always liked ND not being locked into a conference and to have game where ever they want like Tempe as it helps being a national brand. Now we are canceling all the future opponents and all the ACC games with keep ND on the East Coast for over half the schedule with 2-3 ACC away games, navy and temple.

You want to be in Florida but only play fla at or Miami each year so max one game in fl for recruiting doesn’t help. Need 2x games in Texas for recruiting and have Cali covered with Stanford/USC , then add a SEC school in Deep South LSU, Arkansas, Ole Miss so we can get in that recruiting area between Texas and Florida. Drop temple and UMASS to add another Fl , Texas or Deep South game and think you have top recruiting areas covered not just chasing the money.. Arizona is not bad to play in more west coast and Texas nearby exposure. Just my thoughts on our ND scheduling..