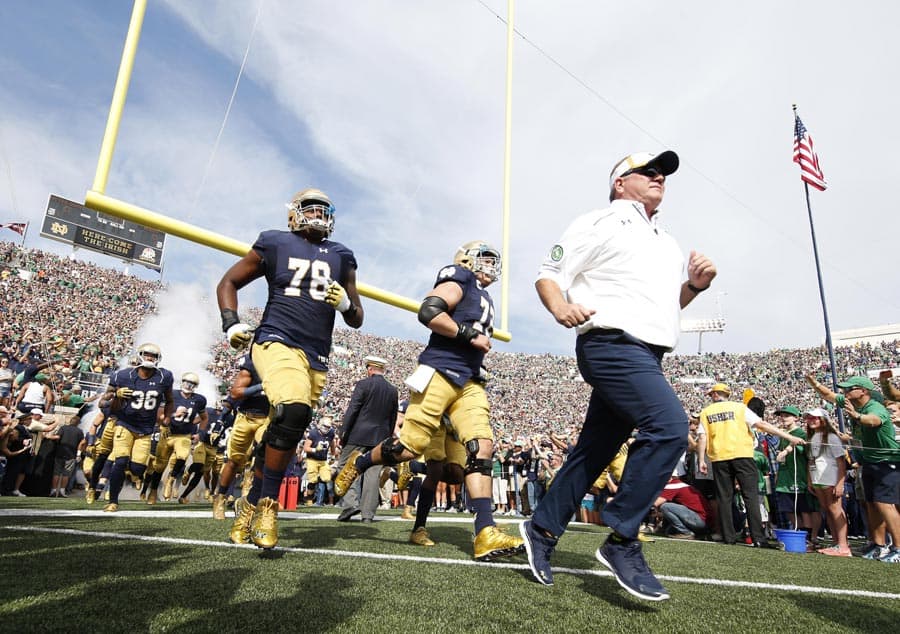 The Notre Dame Fighting Irish have announced their 2017 football schedule, which features games against Georgia, Michigan State, Stanford, and USC.

The Fighting Irish’s first road game is at the Boston College Eagles on Sept. 16. Other road games include Michigan State, North Carolina, Miami (FL), and Stanford.

Notre Dame will not play a Shamrock Series game during the 2017 season because athletic director Jack Swarbrick said he wanted seven home games.

“In 2017, the first year in which we will compete in the renovated stadium, we thought it was important to maximize the opportunity for our fans to attend a home game,” said Swarbrick. “We look forward to restoring the Shamrock Series tradition in 2018 and the years beyond.”

Not a bad line-up, mostly weak teams from the ACC though & only one B10.

Catholics vs. Convicts game isn’t bad and UNC is a better ACC team. I really like the game with UGA the most though!

Stop, ND has proven their worth against real teams. They’re nothing more than a polished up Harvard. Heck
BC gave them all they could handle last season and they didn’t have a QB. It’s over and the Irish fans should just enjoy the top of college footballs mediocre stage which ND occupies

They have to play the acc teams provided given the agreement they have.

Least the rivals are there

but I’d rather watch ND v Michigan than ND vs Temple or Miami (OH) in September.

That is one hell of a schedule – kudos for that one to the ND AD.

this schedule is very tough. it has not been since 1966 since i routed for the irish.you got me now. TCU is the best team in the country. what a long range bet for vegas i.e. incredible value. the irish depth is great. i look forward to see them play TCU in the playoff. great season coming up. dont get caught in a letdown vs M/O LOOKING AHEAD TO N.C.

Every year is a tough schedule at N.D. Looking forward too see how they do GO IRISH

While your point isn’t without merit, Navy has been consistently better than most lower-tier P5 teams in recent years, and it’s far from improbable that Temple would be as well. In general, I’d like ND to schedule 10 P5 teams per year too, but 9 plus Navy is adequate, and add a potentially-good Temple in there too and that’s an impressive slate.

Tully do your research before you make comments. Georgia is the only team in the SEC that plays 10 P5 teams. Every other plays 9 and many of those teams are FCS. And before you use the stale “but they play in the SEC so their schedules are already hard. Kentucky, Vanderbilt, South Carolina, Arkansas and the rest of the bottom of the VERY top heavy SEC is on those schedules. In less than 3 minutes I found an entire conference that proves you’re a moron. C’mon Tully do a little better job of hiding your ignorance.

Everyone is accountable for thier scheduling. Just ask Stanford. It can be a double edged sword.
Respectable SOS. No Big 12 team.

The only ELITE team in America that never made the playoffs, and never won a BCS bowl game. Playoffs will be expanded and ND will only have to win 8 games to qualify because they were good 30 years ago.

Notre Dame plays a military team that has no blue chip player each year abd calls that a game. Conference teams like Alabama not only have to go undefeated during the regular season but have to risk it all in the form of a conference championship. Lose that one game and the season is pretty much just an invitation to a bowl game (consolation game). ND on the other hand plays their schedule with lots of cupcakes and a couple of contenders and then gets an extra bye week with nothing to lose. How is that fair? And let’s not forget ND’s supporter in the form of NBC (Notre Dame’s Bowl Channel). How many teams can lay claim to a major network sponsor? If they were to join a conference, this would become a major issue regarding fairness.