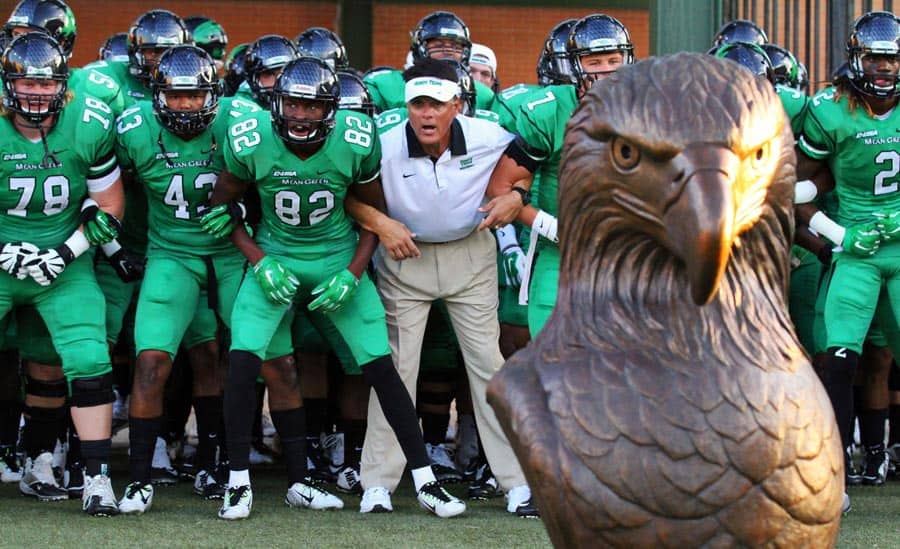 The North Texas Mean Green have announced their 2016 non-conference football schedule, which features a game at the Florida Gators.

North Texas opens the 2016 season against in-state rival SMU on Sept. 3. That game is part of an annual series between the two schools that currently extends through the 2025 season.

A week later, North Texas hosts Bethune-Cookman at Apogee Stadium on Sept. 10. The game will be the first ever meeting between the two schools on the gridiron.

North Texas hits the road for the first time in 2016 to take on the Florida Gators at “The Swamp” in Gainesville on Sept. 17. The game was previously set for Sept. 10 but was pushed back one week, presumably to allow UF to play an SEC game on that date.

North Texas has only faced Florida one time on the football field. In that game back in 1947, the Mean Green defeated the Gators 20-12 in Gainesville.

The final non-conference game of the 2016 season for North Texas is a trip to play Army at Michie Stadium in West Point on Oct. 22. UNT is 0-4 all-time against the Black Knights. The two schools are scheduled to meet each season through 2021.

North Texas’ 2016 Conference USA opponents and schedule will likely be announced early next year. For reference, the 2015 C-USA schedule was released on Feb. 2.

I wish they played more in-state rivals like TSU and Houston.

Need discipline on their players maybe they will get a W

They missed their best opportunity in their poor walk on try outs in 2013 and 2014 . The best talent they will ever see was passed over and that talent playing other schools with coaches who recognize talent that have NFL potential . So sad UNT you could have had it all