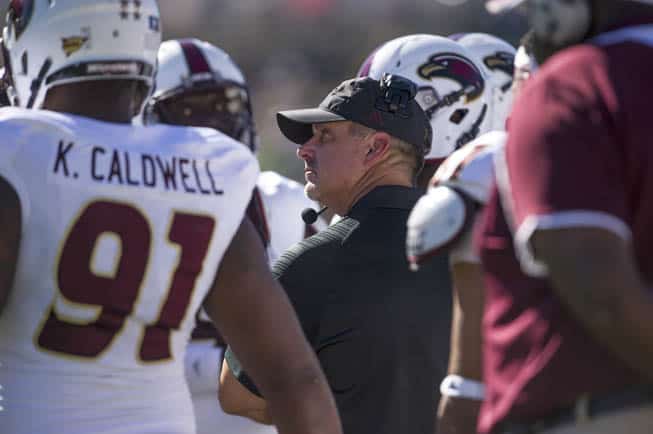 All schedules—especially non-conference ones—aren’t created equally. And that’s true even for the 60 teams who aren’t in a power-league in 2014.

While it’s interesting to analyze which power-conference programs (those from the ACC, Big 12, Big Ten, Pac-12 and SEC) aren’t playing power members in non-league play, it’s also intriguing to know which smaller schools step up to the plate.

Whether it’s for money, exposure or simply an impressive show of gritty fortitude, the following non-power teams are destined to lose at least 75 percent of their non-conference games in 2014.

Not only is East Carolina making the move from Conference USA to the American Athletic (formerly the Big East) in 2014, it’s also going to play two ACC schools and a big-dog SEC program.

After getting ramped up with FCS North Carolina Central on opening day, the Pirates travel to South Carolina to take on the Gamecocks in Week 2, head to Virginia Tech in Week 3 and finish up their non-league slate at home against North Carolina in Week 4.

ECU has a history of scheduling tough non-conference games and has Florida, Virginia Tech and BYU on tap for 2015 and Virginia Tech, South Carolina and NC State in 2016.

SMU joined the American Athletic in 2013 yet still plays its round robin of fellow Texas schools.

In 2014, the Mustangs have a road trip to Baylor on opening weekend, travel to North Texas in Week 2 and then host Texas A&M and TCU in Weeks 4 and 5.

SMU has both Baylor and TCU on its non-conference schedule in 2015 and 2016 and has a road trip to Michigan slated for 2018.

Coming off its best season in a decade, Tulane is showing a lot of gumption in its first year as a member of the American Athletic.

On tap for the Green Wave in non-conference play in 2014 are Georgia Tech, FCS Southeastern Louisiana, Duke and Rutgers.

Though these may not be Florida State and Ohio State, remember Tulane has only been to one bowl game in the last 11 years and hasn’t won in the postseason since beating Hawaii in 2002.

The Green Wave have Georgia Tech and Duke back on the schedule in 2015 and the fun continues in 2016 with Mississippi State and Wake Forest.

The Bulls’ prospects for righting the ship in 2014 will be more difficult with non-conference games against Maryland, NC State and a road trip to face Wisconsin.

Though not necessarily murderer’s row, it’s not the kind of non-league slate that lends well to improving on a 2-10 mark.

Moving forward things won’t get much easier for USF with a home-and-away scheduled with Florida State in 2015 and 2016.

Whoever coordinated UMass’ 2014 schedule is fearless. The Minutemen have Boston College, Colorado, Vanderbilt and Penn State as non-conference foes this season, with the last two coming on the road.

This means that UMass’ entire non-league schedule is against power-five foes. Remember, this is a program that only moved up to the FBS ranks in 2012 when it joined the MAC.

Another MAC team with a tough start to the 2014 season, Central Michigan’s non-conference schedule includes a Week 2 road trip to Purdue, a Week 3 home date with Syracuse and a Week 4 game at Kansas.

Though these opponents aren’t exactly national championship caliber teams, remember that the Chippewa’s are 19-30 since 2010. This is a program needing a 4-0 start to its season, not a 2-2 or 1-3 run.

Things will get even more difficult in 2015 for Central Michigan with non-MAC games scheduled with Oklahoma State, Syracuse and Michigan State.

Not only will Fresno State be without superstar quarterback Derek Carr in 2014, it will face one of the most difficult opening three-game stretches in college football.

The Bulldogs start the season with a road trip to USC, travel to Utah in Week 2 and then return home to welcome Nebraska in Week 3.

The distinct possibility of a 0-3 start will be difficult to stomach for a fanbase fresh off 11-2 finish in 2013.

Another struggling team with a tough non-league slate in 2014, Hawaii comes off a 1-11 campaign with games against Washington, Oregon State, FCS Northern Iowa and Colorado.

The only upside is that the Warriors’ first three games are at home in Honolulu.

Next season doesn’t look much better for Hawaii, who is slated to play Colorado, Ohio State and Wisconsin outside of Mountain West play.

Other than UMass, ULM has the most difficult non-conference schedule of any small school in 2014.

Remember this is a Sun Belt school that has been to one bowl game in program history.

The Warhawks’ 2014 non-conference opponents include the home opener with Wake Forest, a Week 3 road trip to LSU, a Week 7 visit to Kentucky and then a Week 10 meeting with Texas A&M in College Station.

If that wasn’t impressive—or ridiculous—enough, ULM has games at Alabama and at Georgia scheduled in 2015 and will travel to Norman to face Oklahoma in 2016.

UMass isn’t being fearless w/that scheduling. They are being practical. They need that money and exposure from the P5 teams to build their program. They knew they weren’t going to be worth spit going into FBS and figured why bother trying to schedule weak teams to make a bowl when there was little chance of it anyway.

Go ULM! Now that’s a high potent batch of non-conference games. They may be part of the Sun-Belt but the SEC should be ashamed when in comparison to their non-conference schedules! Only thing is it’s going to be a “lil” rough season for the Warhawks, good luck guys!

you will never see Boise State with their non conference schedules. Only rarely do they ever schedule 2 Power 5 conference games in the same year and when they do it is usually with one of them being lower tier teams like Oregon State and Washington State. Last year took the cake with UT Martin and Southern Miss. 2014 includes UConn, ULL, BYU and Ole Miss-their best in years. 2015 they get Washington @ home and to offset that, a trip to doormat Virginia, BYU and Idaho State @ home which stinks even more. Finally in 2020 Florida State comes to Boise, if they don’t cancel it.

I think it would be interesting if you revisited these teams during the 2014 season, after their non-conference schedules have completed, to see how they did.