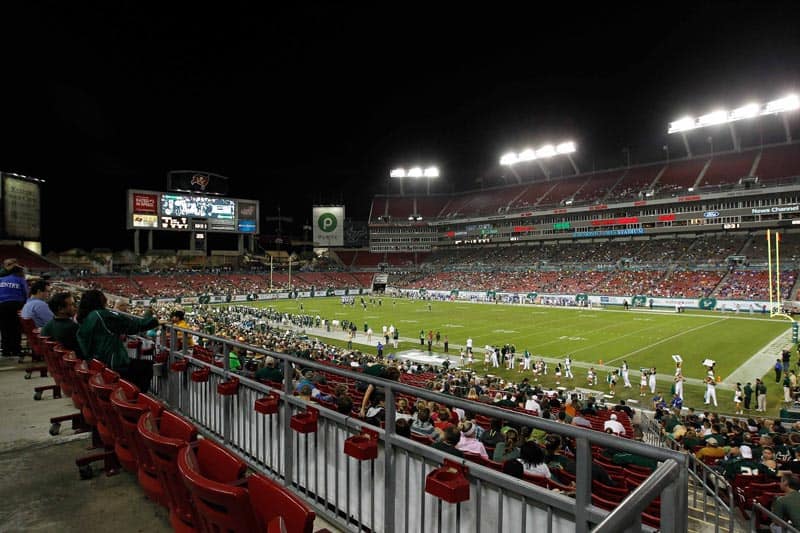 NIU will play in Tampa in 2016. (Kim Klement-USA TODAY Sports)

Northern Illinois has announced their final #SchedulePaloozaEncore opponent, and it’s the USF Bulls. NIU and USF will play a home-and-home football series in 2016 and 2017.

NIU will travel to face USF at Raymond James Stadium in Tampa on Sept. 10, 2016. The Huskies will then host the Bulls at Huskie Stadium in Dekalb on Sept. 23, 2017.

“USF is a great future opponent for us,” NIU Associate Vice-President and Director of Athletics Sean T. Frazier said. “They’re a member of the American conference, a fellow Group of 5 league, that plays in an outstanding pro stadium in Tampa. We’ve had a lot of success recruiting in Florida over the last several years, and this is a chance for more exposure in that state and for our Florida natives to play in their home area. Not to mention it brings another quality opponent to Huskie Stadium when they come to DeKalb in 2017.”

NIU and South Florida have met three times on the gridiron in a series that began in 2001. The Huskies won the first half of a home-and-home series 20-17 in Dekalb in 2001 before the Bulls took the next game 37-6 in Tampa in 2002.

The two schools then met seven seasons later in the International Bowl in Canada on Jan. 2, 2010. USF won that game 27-3 to take a 2-1 edge in the series.

The addition of USF gives Northern Illinois four non-conference opponents for either the 2016 or 2017 season, depending on which year they host Boston College (either Sept. 23, 2016 or Sept. 2, 2017).

This should be a fun series. I’m looking forward to seeing Tampa! :D