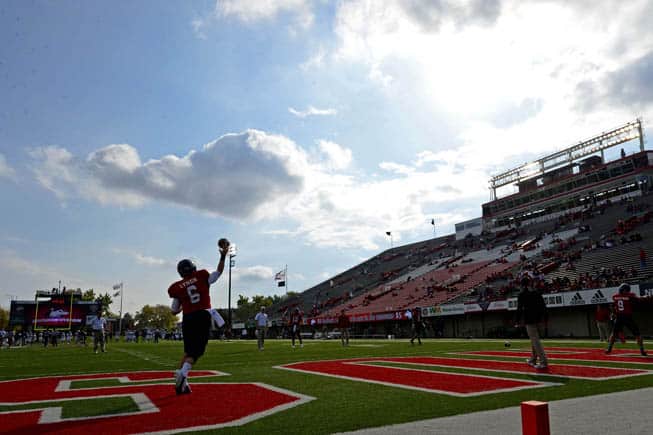 The Northern Illinois Huskies and the UNLV Rebels have scheduled a home-and-home football series for 2014 and 2015, both schools have officially announced.

In the first game of the series, Northern Illinois will travel to face UNLV at Sam Boyd Stadium in Las Vegas on Sept. 13, 2014. NIU will host the second and final game at Huskie Stadium in Dekalb to open the 2105 season on Sept. 5.

NIU leads the overall series against UNLV 3-0, but the two schools haven’t played since 1995.

“Scheduling is driven by relationships,” NIU Associate Vice-President and Director of Athletics Sean T. Frazier said. “While most of the contracts for 2014 were in place when I arrived [in July], it was great to work with Northwestern and UNLV to add a local game that many of our fans will be able to attend. I will continue to work to bring attractive non-conference opponents to Huskie Stadium.

The addition of UNLV completes NIU’s 2014 non-conference schedule. The Huskies open the season at home on Thursday, Aug. 28 against the Presbyterian Blue Hose of the FCS.

NIU then hits the road for three straight games: Northwestern on Sept. 6, UNLV on Sept. 13, and Arkansas on Sept. 20.

The Huskies tentatively have three games set for 2015. NIU also travels to Ohio State on Sept. 19 and hosts Wyoming on Sept. 26.

UNLV has completed their 2014 and 2015 non-conference schedules with the addition of Northern Illinois. If they desire, UNLV can add an extra game in 2014 because they travel to Hawaii.

NIU is the next Boise State. They are really building something there. I know their goal is to join the Big 12, and who knows, they may just get in…

I agree. They would fit perfectly in the Big 12. Beating two Big 10 teams in 2013 showed they can compete with the big conference teams.