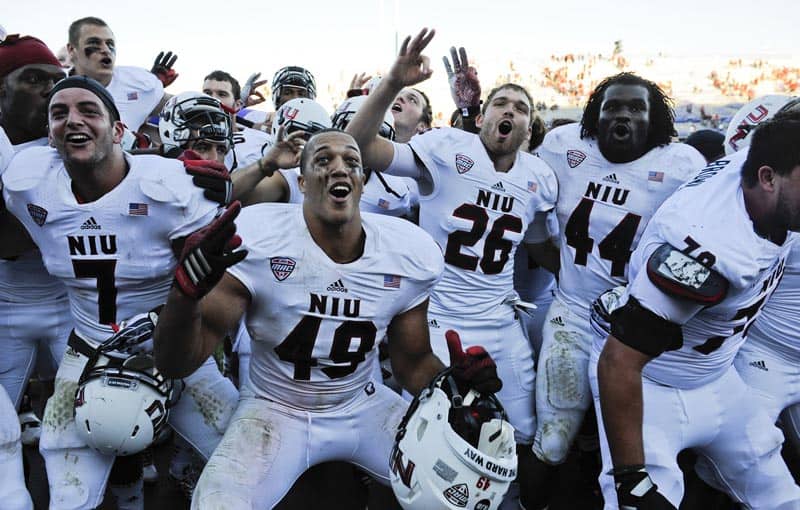 The Northern Illinois Huskies have brought back SchedulePalooza for an encore. They kicked off this week’s event with three tips that culminated in the announcement of a future football series with Tulsa.

NIU will travel to face the Tulsa Golden Hurricane at Skelly Field at H.A. Chapman Stadium on Sept. 10, 2022. The Huskies will then host Tulsa at Huskie Stadium in Dekalb on Sept. 23, 2023.

NIU, a member of the MAC, and Tulsa, a member of The American, have never met on the football field. Tulsa competed in Conference USA from 2005 through 2013.

“This is a great start to the SchedulePalooza Encore,” NIU Associate Vice-President and Director of Athletics Sean T. Frazier said. “In this era of the College Football Playoff, it’s important to have teams from other Group of 5 leagues on our schedule, and this series with Tulsa accomplishes that goal. These games are a long way down the road, but it shows just how far in advance we are working in terms of our football schedules.”

Tulsa is the first non-conference opponent scheduled for Northern Illinois for the 2022 season and second for 2023. The Huskies are scheduled to play at Nebraska on Sept. 16, 2023 and host Tulsa a week later.

NIU is the first announced non-conference opponent for Tulsa for both the 2020 and 2023 seasons.

Wonder if they will seek another game with the Razorbacks….Arkansas looks to be back this year…

Hope so. NIU needs to schedule the best they can, when they can. NIU is down from the last two years, but we need to get the quality teams whenever they can to have a proper yardstick to measure where they stand and continue to attract quality athletics and quality competition.

I was pretty shocked by the Huskies-Razorbacks score….maybe NIU loses but not by 38… We still have a way to travel…

Score was really lopsided but NIU also gave Arkansas numerous opportunities and give the Razorbacks because the capitalized.

So is the [email protected] game happening in 2016 or in 2017? Does that depend on if BC & Buffalo can agree to cancel/move their scheduled 2016 game? BC still needs to schedule two games for 2015. Still unable to confirm a date for the 201 BC-NM St game? Why is BC always so behind getting a schedule together? Elon cancelled their 201 game against BC in order to play Wake Forest. So BC has to find another FCS opponent at the last moment. That has to smart, if you’re an Eagle fan. Still not comprehending why USC scheduled BC.

Still unable to confirm a date for the 2015 BC-NM St game?

Oct. 17, 2015. NMSU still has not canceled or moved any of the 2015 non-conference games. Would be easiest to move UTEP, but they are a pretty much an annual opponent and it’s the only home game NMSU has.